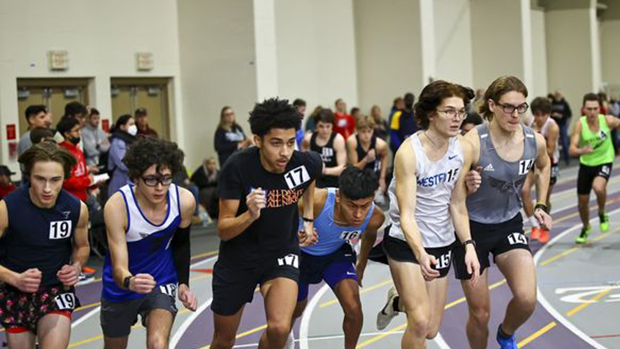 Today's Hoosier State Relays will fill IU's Gladstein Fieldhouse to the brim with athletes, parents, coaches, officials and other fans to support their schools as the Indiana "indoor season" wraps up. The competition will be fierce as individuals and relay teams fight for Hoosier State Relay medals for the first time since the 2019 Track and Field season. The team battles are sure to be close and competitive with many teams qualifying multiple relays and individuals on their way to contend for team titles.

Some of the biggest stars we have in our sport will be competing at IU today and it seems as if you can find one of those stars at every "edge" of the track. Watch the sprints, or the throws, or the jumps, or the distance races and you will not just see Indiana's best, but some of the best in the nation.

Here is a preview of some of the HSR individual headliners:

Farley and Park Tudor teammate Sophia Kennedy* make up quite possibly the best duo in the state. Their two talents have propelled the Panther's distance relays to the HSR finals, though Kennedy is not listed as a possible athlete in either relay. The focus now goes to Farley who has already run a 2:09.52 in the 800m this season. It is unknown to us what legs of the relays she will run, but be sure to look at the track during the small school distance relays to see one of the best distance runners in Indiana run some fast splits.

*An early look at the performance list did not include Kennedy who was an All-American this fall at the Eastbay National Championships.

Martin was the lone girl in the small school division to break 11 minutes in the 3200m run in qualifying with a time of 10:41.52. A medalist at the last couple IHSAA State running championships, Martin at her top form is certainly in a class with other top all-state caliber athletes. Martin could cruise to a 3200m run victory and then help the Braves DMR team ascend to 1st place with a hampered Park Tudor Panthers relay not at full strength. Either way Martin is sure to play a big part in the scoring for the Braves at the HSR finals.

The 2021 state champion in the 110m hurdles is prepped to take the 60m hurdle championship at HSR and to add to it Mehringer is also seeded top 3 in the 60m dash AND the long jump in the small school division. Another all around great athlete whose best event is the hurdles as she currently holds the state's top time in the 60m hurdles at 8.85 seconds. Just a junior, Mehringer is poised to defend her hurdling title and maybe even add some other events into her repertoire. Mehringer will be can't miss as she competes in 3 separate events at today's finals.

A member of last fall's cross country team champion and the third overall individual finisher over 5000 meters, Thirunavukkarasu is one of Indiana's most talented athletes and one of those athletes that has been doing it since he arrived on the competitive high school scene. He has the fastest qualifying time in the 3200 across both small and big schools at 9:08.46 and will also most likely have a hand in the Braves placing extremely high in the 4x800m relay or DMR in the small school division. Thirunavukkarasu is listed in both relays for Brebeuf but the assumption is that he will be the anchor on the Braves DMR squad and try to propel them to a relay victory.

Another multiple time medalist at IHSAA state running meets, Wolf enters the HSR finals with the 2nd seed in the 3200m run at 9:27.22. He is sure to put himself into the thick of things even with tough competition in the 3200m field. Wolf is also part of the Rangers DMR team who could contend for a medal spot in the small school division. Wolf has asserted himself as a top distance runner and with the athletes split this weekend into classes, don't be surprised to see his name farther up on the scoreboard at these finals.

Colquitt has done what very few have been able to do in an indoor season, be seeded top 2 in two individual events going into the HSR Finals. The Brownsburg senior, defending 110m hurdle and 300m hurdle state champion, posted a 8.00 in the 60m hurdles a couple weeks ago, a time that has held up as the top seeded time during HSR qualifying. He is also seeded 2nd in the long jump with a 22'5" jump only 5 inches behind state leader Pierre Hill. Colquitt's talent and big meet experience makes him a must watch in multiple events.

The 2021 IHSAA 200m and 400m State Champion takes the track for the shortest individual event at the HSR finals, the 60m dash. Elliott has the speed for the shorter race as she's already shown with her top seeded 7.47, 0.15 ahead of the next best time. Elliott is also listed in the Panther's sprint relay groups, so expect to see her in at least one if not both of those relays in the distances that she has dominated over the last 3 years. One of Indiana's best sprinters of all-time can continue to add to her legacy as a potential HSR Individual champion.

Johnston has vaulted a states best 16'0", a foot higher than anyone else, on his way to the top seed at the HSR finals. The Hobart junior and last spring's top returner enters the finals with a large gap between him and the 2nd seed. Who knows at what height Johnston will enter the competition but the Pole Vault is always an exciting event to watch especially being front and center at Gladstein Fieldhouse. It will be easy to notice when Johnston is soaring above the bar along his way to a potential individual championship.

The defending cross country state champion finds himself on two relays that have the top seeded times at the HSR finals. The Bulldogs 4x800 relay has gone 8:05.37 (a relay which Kilbarger-Stumpff wasn't even on), and the DMR has gone 10:30.83 to lead the state. Kilbarger-Stumpff's deadly range has made him an elite distance runner in the state and the nation. Having him as a potential anchor on double scoring relays can even lead the Bulldogs to a possible team title. A name to definitely watch for at this meet and the rest of the season.

Mathison is another nationally elite distance runner with fantastic range like his counterpart mentioned above. The 2021 IHSAA runner-up in the 3200 is not listed in the 3200m run or the Greyhounds DMR this weekend, but Mathison would presumably anchor the Carmel 4x800 and give them a chance to go for the win in that event. Though he most likely won't do multiple events at the HSR finals (he is listed in Carmel's 4x400 relay team), still expect an electrifying performance from Mathison when he receives the baton for his leg of the 4x800 relay.

Arguably the best overall athlete in the state, Sanders has competed in multiple pentathlon events this indoor season. Obviously there is no pentathlon at the HSR finals but Sanders will still compete in multiple events as she is listed on both of the Irish 4x200 and 4x400 relay rosters and is tied for the top seed in the 60m hurdles. Last spring's 300m hurdle champion is another nationally elite level athlete to keep your eye on as you watch the races this weekend.

All these athletes are obviously consistent and consistently great, but maybe none more than Smith when he gets in the shot put ring. The Bulldogs throwing powerhouse enters HSR having already thrown 67'9" in the early season, over six feet farther than the 2nd seed in the large school division. The big question is will Smith eclipse the 70' mark on his way to a sure fire individual championship? Whether he does it this weekend or sometime in the next couple months, at some point this season everyone should make it a point to watch Smith throw because it is a remarkable sight.

Another nationally elite athlete in Indiana is high jumper Stephens from Warren Central. The Warrior senior has jumped 7'0" already this season and appears to be the favorite for indoor and outdoor titles. After Stephens 11th place finish at last year's state finals, he is poised to show that he is the best high jumper in the state. The field events this year are stacked with talent and Stephens in the high jump is no different.

Wiley is an all around great talent with a rare combination of speed and endurance. Her coaches prove that point by having her listed on the 4x400 relay roster as well as the DMR. For this weekend though, our eyes are focused on Wiley's appearance in the 3200m run. She has a chance to break the HSR 3200m meet record of 10:19.57 by Waverly Neer from 2011. Wiley enters the meet with a seed time of 10:21.02 that she ran the first week of the HSR qualifying period. Being only a couple seconds off that record and having the potential to be pushed by fellow Addison, Addison Knoblauch of Homestead who was 9 seconds behind Wiley when she ran the 10:21, it is sure to be an exciting race with two of the best distance girls in the state going after an historic record.