Surprises, strong showings from some of Indiana's top teams in Shelbyville

The weather cooperated -- even though it teased us with some damp conditions overnight and into the early morning hours -- but ultimately Mother Nature produced a great morning and the athletes took full advantage.

The boys race kicked the morning off with a bang. Carmel's Kole Mathison and Charlie Schuman ran clear of the field to produce a huge 1-2 performance for the Greyhounds, a somewhat surprising individual finish.

Mathison was clocked in 15:15 and Schuman in 15:18 over the 5k course. Mathison was the pre-race favorite, for sure, but Schuman's continued development throughout the season continued as he pushed past several runners who not only had better PRs but had also bested him this season.

Saturday may have been his moment and gave Carmel possibly the best 1-2 punch in the state.

Westfield's Kai Connor came up big for a tough third-place finish, separated by less than a second (0.10) over Center Grove's Parker Mimbela. Both were timed at 15:29.

The team race was expected to be tight after the regional performances from several teams, and there definitely were a few surprises. Brebeuf used five runners in the top 19 to pull away from podium contenders Center Grove and Carmel.

Brebeuf's team places of 5-10-12-14-19 gave the squad a total of 60 points to pull out the 60-77-86 victory over Center Grove and Carmel, respectively. The race was mostly decided in places four and five, with Brebeuf simply being stronger Saturday -- the Braves scored 33 points between those two places while Center Grove scored 49 and Carmel 60.

This could be a huge factor in the state championships next Saturday as those gaps could grow even further. Zionsville distanced themselves from Noblesville (fifth) and Franklin Central (sixth) to finish fourth with 129 points.

Noblesville finished with 159 and Franklin Central 184 to grab the last two spots to state. The Flashes were not exactly a surprise to qualify for the state finals, but the margin of 184-222 back to seventh-place Westfield was a little larger than expected, demonstrating an outstanding day FC had Saturday. 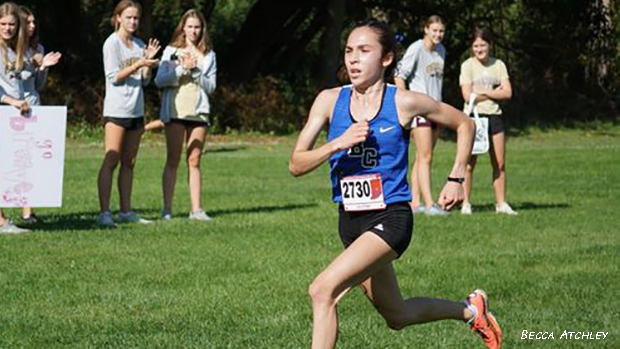 The girls race was a little more to form as Carmel used a 1-2-3 team scoring to secure the relatively easy and expected victory over Noblesville.

Carmel teammates Jasmine Klopstad (18:12), Jamie Klavon (18:14) and Alivia Romaniuk (18:17) finished fourth, fifth and sixth overall and 1-2-3 in the team standings to give the Lady Greyhounds only six points through three runners.

That easily allowed them to pull out the 32-point victory over a talented Noblesville team that has proved itself capable of a top five finish at the IHSAA state finals. A pleasant surprise was probably the third-place finish of Franklin Central.

Like FC's male counterparts, it was not a surprise they qualified, but it a little surprising the girls finished third, almost 40 points ahead of the sixth-place Orioles from Avon.

Westfield was fourth with 144 points, 11 behind the Flashes' 133. A strong North Central team placed fifth with 148 points for a very tight team race within 15 points. Avon stepped up and took the final qualifying spot over Zionsville by three points, 172-175. The Orioles punched their ticket by out-scoring Zionsville 92-103 at spots four and five.

The individual race went exactly as expected up front with Lily Cridge from Bishop Chatard torching the course and field with a blistering 17:04 to prove just how dominant she is and how ready the Blue River course was to produce fast times.

Her winning margin of 42 seconds over a likely pair of top five runners was amazing and continued her incredible season. Park Tudor teammates Gretchen Farley and Sophia Kennedy distanced themselves easily from the Carmel trio to come home in a comfortable third- and fourth-place finishes in 17:46 and 17:52, respectively.