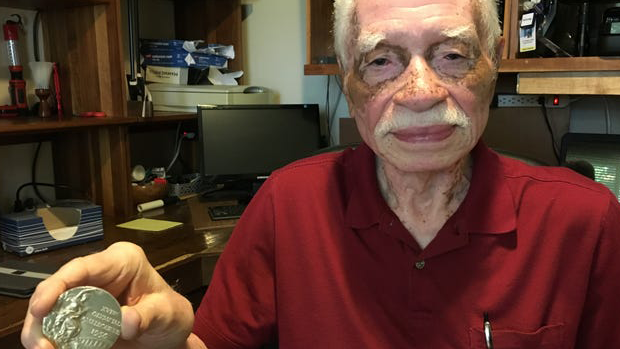 Dr. Greg Bell, a Terre Haute native, is a name that every Indiana track and field athlete should know- so why don't more of us recognize it immediately?

Bell is an Olympic Gold Medalist in the long jump from the 1956 Melbourne Games. He was a two-time national champion in the long jump for Indiana University- where he was undefeated. He served as the Director of Dentistry at Logansport Hospital for 50 years. He is also an Army veteran.

Those are all tremendous accomplishments worthy of praise from anyone coming from the Depression-era and post-World War II. Bell was born in rural Indiana and grew up very poor on a small farm- adding to his story. But something else makes Dr. Greg Bell's story even more remarkable- he accomplished all of this as a black student-athlete growing up in the height of segregation.

Dr. Bell's journey is an amazing story of hard work, determination, and true character in the face of discrimination and long odds.

Born on a small farm outside of Terre Haute in 1930, Dr. Bell grew up very poor. At one point, the family house burned down, forcing the family to modify the chicken coop to live. Then, in 1942, the government bought the land his family lived on for $1,500 and left essentially homeless. They moved to Terre Haute where Dr. Bell enrolled at Garfield High School as a sophomore.

Track was a natural fit for Dr. Bell. He recounted several times in his speaking engagements and interviews that he was always faster than the other kids his age. But his path through school was not as easy. Dr. Bell told IndyStar journalist David Woods in an interview that racism was there, but he did not let it deter him.

"I accepted it for what it was", Bell said. "That was the way times were. But I detested it."

In one account, Dr. Bell tells a story of an English teacher telling him that "black students could not earn better than a C". A particular point of emphasis when hearing Dr. Bell speak is that he enjoyed the idea of wanting to show the former teacher his A from his English class at Indiana University.

Dr. Bell's talent in high school did not get him into college immediately, although he was a runner-up in the long jump at the state finals his senior year. Instead, he moved to Chicago and started working odd jobs for little pay as was the norm for African American migrants north in the late 1940's.

In 1950, he was drafted into the Army and sent to Occupied Europe instead of Korea. While stationed in France, Bell, figuring his long jump days were over, was given a chance to compete in a meet in France where he excelled, winning multiple events. This performance allowed him to get selected for a military competition where he won the long jump- jumping further than his high school distance.

Either luck or divine intervention, track and field kept coming back into Dr. Bell's life despite obstacles.

Upon leaving the military, Bell returned to Chicago where he met Dr. William Bannon while being treated for tonsillitis. Dr. Bannon pushed Bell for over a year to apply for school. Bell finally did- entering Indiana University as a freshman in 1954.

Bell was not recruited but talked his way onto the track team. He could not compete his freshman year due to NCAA rules at the time. He had to work small jobs to help pay for his expenses and his young family- he married and already had one child.

Bell's long jump career literally took off after that. He was the Big Ten and NCAA champion in 1956. He tied for first at the Olympic Trials. In a final tune-up meet, he nearly broke Jesse Owens world record. The 1956 Melbourne Olympics was testament to Bell's strength and toughness. Under less than ideal conditions, Bell jumped the third longest jump in Olympic history at the time and took home gold for the United States.

Bell was honored back home in Bloomington and Terre Haute as a hero. Although discrimination was not absent, Bell had achieved so much that an African American was named the Honorary Mayor for a day in  Terre Haute.

Bell went on to finish dental school while working on a farm and doing lots of different small jobs to pay the bills. He seems to have never dwelled on the obstacles he faced but instead just continued to not be deterred. When you read about Dr. Bell in depth, he seems like what all us should be- hardworking, caring, and, most of all, just a human being with a burning desire to achieve his goals. Bell has been inducted into several Hall of Fames, including the Indiana Association of Track and Cross Country Coaches and the National Track and Field Hall of Fame.

He dedicated his life's work in dentistry to the state's oldest psychiatric hospital in Logansport. Bell was there until age 91 before retiring.

Bell recently was included on a mural painted in his hometown of Terre Haute. The honor seemed to bring out the philosophical side of his nature.

Bell told Zeke Thomas from mywabashvalley.com, "I hope they try to learn something about me or whoever they happen to look at on this mural," he said. "Look at the groundwork I laid. I wasn't aspiring to be anything but the best Greg Bell I could be. If that was good enough to win, and it was, great."

What a great sentiment. There are so many things beyond our control. But if a high school student or student-athlete simply puts their mind to being the best individual they can be, you eliminate the man-made barriers placed in front of you and take your opportunity into your hands.