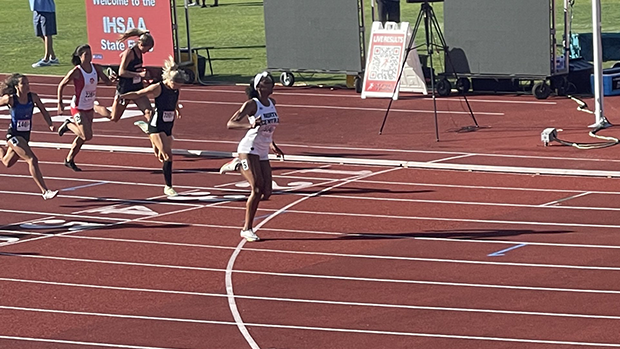 The IHSAA State Finals produced one the finest state meets in Indiana History. It is hard to know who to highlight first from last night's incredible performances.

Ramiah Elliott of North Central did the nearly impossible and won the 100m, 200m, and 400m dashes. That individual sprint sweep was not enough so Elliott completed the night with a 52.7 anchor on the winning 4x400m relay team. This certainly cements her place in IHSAA State history as one of the all-time great sprinters of any era.

Elliott not only won the three individual events but did so with huge performances. Her night looked this:

Elliott also led her team to the state title with 55 points. They easily outdistances Noblesville's 40 points to bring home the trophy.

Almost as impressive, Addy Wiley from Huntington North almost completed the distance triple. Wiley completely dominated the 1600m and 800m races, both with State Meet records. Wiley finished the night with a third place in the 3200m and led her teammates immediately after that to a 14th place finish in the 4x400m.

Hadley Lucas of Bloomington North was the double winner in the throws. The sophomore was outstanding in the discus with a winning mark of 147-04 that won the event by over 10 feet. Her 46-04.25 was basically a foot further than the competition.

The sophomore could be setting herself up as one of the best all-time throwers in Indiana history with double victory in an event that typically gets better with strength and age. She was 5th last year in the discus and was also a state qualifier in the shot.

Let's take a quick look at the other outstanding performances and events winners from the best night in track and field in Indiana.

In the 100m hurdles, Rachel Mehringer of Forest Park repeated as the state champion. Her time of 13.92 just nipped the old state meet record of 13.93. This gives Mehringer, only a junior, back-to-back titles already to go along with the state meet record. She is setting herself up to go down as one of the top hurdle runners in state history.

Reese Sanders, Cathedral, was also a repeat winner in the 300m hurdles. Sanders, who also medaled in the 100m hurdles, easily outran the field by over a second to take the title in 42.99. Her back-to-back titles and multiple All-State performances give Sanders a huge legacy as she moves on to the University of Notre Dame. She was a part of Cathedral's state title last season and set indoor multi-event records this past season to solidify her status.

The 3200m was a great dual between two of Indiana's superstar distance runners. From the gun, Sophia Kennedy (Park Tudor) and Nicki Southerland (Delta) distanced themselves from the field. Kennedy set a strong early pace of 5:14 through the mile as the two dueled back and forth. The pair negative split the race to an exciting finish. Southerland overtook  Kennedy but the two stayed close over the last two laps with Southerland eventually pulling away for the 10:22 to 10:25 victory.

The 4x100m relay was very close and a highlight from the evening. Four teams ran 47 seconds with Zionsville winning in 47.23. Brownsburg was runner-up in 47.61. Right behind the pair were Lake Central and North Central at 47.91 and 47.95, respectively.

The 4x800m relay was a true battle as no team could pull away from the field throughout all four legs until the last 600m. Columbus North, Noblesville, and Valparaiso were the consistent top three teams throughout the eight-lap event. With the lead switching back and forth, eventually Valpo's 800m star Kaylie Politza ran a 2:05.9 to pull away from Columbus North and Noblesville. Columbus North's Lily Baker, who also finished 6th in the 800m, overtook Noblesville's Summer Rempe, who finished 7th in the 800m, for the silver.

In the high jump, Kankakee Valley's Emily Nannenga jumped 5-10 to show she was the class of the field on Friday night. Her winning leap put her three inches ahead of the runners-up. There were four girls who jumped 5-7 for the second position, including her teammate, Taylor Schoonveld. The Kankakee Valley junior will return as one the highly ranked track athletes in Indiana next spring as the next step could be 6-0.

The pole vault was dramatic as Mackenzie VanBibber, Plainfield, and Kennedy Merrell, Zionsville, both vaulted to 12-03. The two seniors were separated by misses as VanBibber cleared 12-03 on her first attempt while Merrell cleared it on her third. The pair were both qualifiers las year as well.

The long jump produced an unusual outcome. Alexia Smith from Evansville Bosse had one legal jump, an 18-09.75 on her third attempt. That was good enough for the junior to win the event by just over an inch. Courtney Jones from Terre Haute South was the runner-up with an 18-08.50.