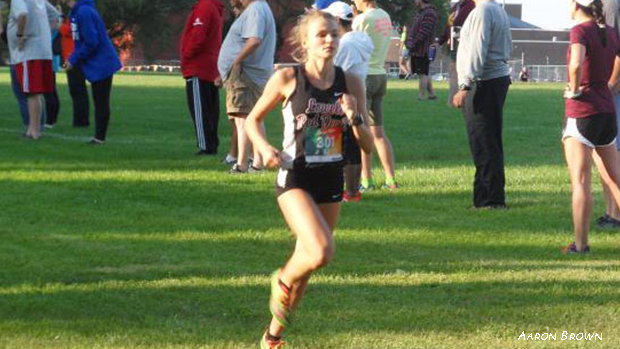 The IHSAA State Tournament series started with a bang Saturday morning as 32 Sectionals kicked off around 10:30 a.m. with boys racing first across Indiana. There were several great team performances, a few surprises, and probably many tears of joy (a few sad ones, too).

Let's start our coverage of the weekend with results from the Sectionals that will feed into the New Prairie Semi-State. The eight Sectionals include Highland, Hebron, New Prairie, Rensselaer Central, Benton Central, Harrison (Lafayette), Manchester, and Logansport. The top 5 teams and the top 10 individuals NOT on a qualifying team move on the Regional next week.

The Lake Central boys pulled out a close win over Munster- 29 to 35, respectively. Lake Central was led by Vincent Vanderveen who was the individual champion in 16:53. He was followed closely by Munster's Ralph Brown and his LC teammate Ethan Schassberger. Brown was 7 seconds back and Schassburger was 14 seconds behind his teammate. Lake Central and Munster traded punches up and down as their respective placers were right next to each at almost all 1-5 places. LC was just strong enough at each spot to keep the 6-point advantage. Highland advanced in 3rd with a nice pack of runners who started in 14th place but finished by 25th. Griffith, led by Joseph LaPatra in 4th, mirrored his finish in 4th to move on the Crown Point. Gary West Side just edged Hammond Central for the final spot in Crown Point's Regional next Saturday.

On the girls side, Lake Central did just as expected, sweeping the field and coming within one place of taking the first 7 spots. They were led by Sydney Churilla and Mackenzie Smith who were timed in 20:02 and 20:18, respectively. Highland and Munster followed and were definitely in between sets here as they were 40+ points back of Lake Central but 60+ points ahead of 4th place Griffith and 5th place Whiting. Mary Buck led Munster with her 7th place finish and Madison Stephens led Highland with her Top 10 placing in 9th.

On the Boys' side, as predicted, Crown Point battled Illiana Christian to a 7-point. CP clipped Illiana 54-61 with their depth at places 3-5 in the lineup- beating them at each spot. Jackson Bakker from Lowell was the individual winner in 16:35.5, edging out Ryan York from Hanover Central at the line by .5. York was timed in 16:36.0. Hobart (3rd), Lowell (4th), and Hanover Central (5th) took the rest of the qualifying spots. Hanover Central's 2-3 finish helped them edge host Hebron by 10 points for the final spot. Merrillville's Zachary Dunn was the first individual qualifier in 4th place to earn a spot in next week's Crown Point Regional.

The Girls' race reversed the results for team placing with Illiana Christian edging out Crown Point 41-52 for the Sectional championship. Illiana's edge came from their 3rd-5th runners as the won those battles to secure the title. To no one's surprise, defending state champion Karina James from Lowell won the individual title in 18:29, two minutes and fifteen seconds ahead of Maria Davenport of Hanover Central. Davenport led Hanover Central to a 3rd place finish ahead of Lowell and Boone Grove. In one of the tightest team places for advancement, Boone Grove's 131 points put them just 3 points in front of Hobart and 5 points clear of Hebron for the final spot in the Crown Point Regional.

The New Prairie Sectional Boys' team race was as close as it gets without going to the tiebreaker. LaPorte started the scoring with a 1-2-3 punch to Valparaiso, who responded with 4-5-6 finish. Down 6-15 after 3 scorers, Valpo closed a total of 8 spots better than LaPorte's 4th and 5th runners but it was not enough as LaPorte held on for a 42-43 victory. Cole Raymond led teammates Janan Pillai and Brayden Sobecki to the strong 1-2-3 finish. Portage, New Prairie, and Chesterton all finished within 5 points of each other to claim the other qualifying spots with respective scores of 99-103-104.

The Girls' race was nearly as exciting with only 4 points separating the victorious Valparaiso team from Chesterton, 40-44. The team race was very back and forth throughout the 5 runners from each team but Valpo had the advantage on both ends of the scoring group with slight margins at both the 1st and 5th places. Kaylie Politza from Valparaiso was the individual champion with a winning margin of about 15 seconds over Lillian Zelasko from New Prairie in a battle of two likely Top 5 Semi-State athletes who both broke 19:00 minutes on the challenging New Prairie course.

Morgan Township was the expected winner on paper and they did not disappoint with a convincing 35 points and four Top 10 performances on the day. Morgan Township's Owen Thomas (16:39) was the individual winner over a tough Justin Hoffman (17:03) from Kankakee Valley. Morgan Township distanced themselves from host Rensselaer Central and Kankakee Valley, who fought each other to a 12-point separation. Kouts was 3rd and Covenant Christian (DeMotte) got past West Central by just 6 points to nab the all-important last qualifying spot for the Regional.

Morgan Township made it a clean sweep of the team titles with a 40-57 victory over Kouts for the Sectional title. Morgan Township used a 3, 6, 8, 10, 13 (and even 14th and 15th places for their bumpers) performance to pull away from the field. Rensselaer Central, Kankakee Valley, and Covenant Christian (DeMotte) took the 3rd-5th Regional-qualifying spots in the team competition. Rensselaer Central's Amzie Maienbrook took the individual title over KV's Emma Bell.

The host Benton Central Bison won the boys' Sectional in what was likely one of the most overall competitive Sectionals of the entire day. Benton Central finished with 49 points which placed them comfortably ahead of North Montgomery's 68 but North White and Twin Lakes both finished with 80, North White winning the tiebreaker, and Frontier grabbed the last spot with 121. Fountain Central's Hayden Kler was the individual winner in a winning time of 17:30.

The Girls' Sectional title went to the expected favorite, Seeger. Seeger used a 1-2 finished from Jennifer Romero and Hadessah Austin to easily outdistance the field, beating Benton Central by 16. Twin Lakes took 3rd with 73 points. Fountain Central took 4th just before a very close battle for 5th between Frontier and North White- who were only separated by 3 points- 121-124- with Frontier taking the title. Benton Central and Seeger each put 3 in the Top 10, but the 1-2 Seeger finish set the tone for the victors.

The Boys' Sectional championship was a great overall team race as predicted. West Lafayette started the race with a 1-2 finish from Elijah Stenberg and Henry Balagtas and actually had their #3, Albert Rajwa, in the Top 5 with a 5th place finish. That typically would spell victory at the Sectional level but no one told Lafayette Jeff that this morning. They put their 6th runner in front of West Lafayette's #4 and separated just enough for a 53-59 victory with great team depth. Harrison (West Lafayette) was also not far behind as they totaled 66 points to look very strong for the Regional next Saturday. Frankfort and McCutcheon took home the final two qualifying spots for next weekend to extend their seasons.

The Girls' Sectional title was essentially a two-team race for the title between Harrison (Lafayette) and West Lafayette as expected. Harrison put their #3 runner in before West Lafayette's #1. Harrison's Emma Beimfohr, Caitlin Williams, and Jaylie Lohmeyer went 1, 2, 4, respectively, to put immediate distance between themselves and West Lafayette. However, West Lafayette made it interesting with a 5-6-7-8 pack to keep it close. It was not enough, however, as Harrison held on to win 31-42. Faith Christian took a strong 3rd place with McCutcheon and Lafayette Jefferson also qualifying for the next round.

Warsaw, a perennial New Prairie powerhouse, proved to be too strong for the rest of the Manchester Sectional field and pulled easily away from the pack putting 4 in the Top 9 to score a low 34 points. Culver Academies, another blueblood from the area, finished a clear runner-up and was led by the Sectional Individual Champion Samuel Tullis. His winning time of 16:44 put him 8 seconds ahead of Warsaw's Garrett Hall. Plymouth, Rochester Community, and host Manchester all easily qualified for the Regional next Saturday.

The Warsaw Girl's team also emerged as easy victors Saturday with a 31-60 victory over Rochester, despite Rochester having the #2 and #3 finishers in Madilyn Calloway and Zoe Seward. Warsaw, led by Josefina Rastrelli's individual championship in a time of 19:28, placed 5 in the Top 10 and all 7 varsity runners in the Top 14 to show themselves the class of the field. Culver Academies was just behind Rochester with 64 points for 3rd. Manchester and Plymouth rounded out the Regional-qualifying teams with their 4th and 5th place finishes.

Northwestern Boys pulled off the team victory with a strong team pack where they start in 8th place and finished in 16th- going 8, 11, 13, 14, and 16- with actually 18th and 21st to round out the Top 7 for their varsity. This balanced attack gave them a 62-101 win over runner-up Cass. Cass held off both Western and Pioneer by 7 points as the two tied at 108. Western won the spot with the tiebreaker. Winamac Community closed out the Top 5, capturing the last Regional spot in the meet. Isaiah Wittenberg from Maconaquah was the individual winner in 17:07. This was predicted to be a close team race and it did not disappoint.

The Girls' race was equally as exciting, if not more, with the top three teams only separated by 5 points. Western's 5th runner was 5th runner was 3 places in front of Maconaquah's #5 and 4 spots ahead of Winamac's to perfectly win the meet for her team. What a great performance Sophie Foehner! It obviously takes five teammates but the meet came down to a near tie through 4 runners each and she came through! Cass and Northwestern stepped up to grab the last two qualifying spots for the Regional. Northwestern's Hannah Moore was the class of the individual field with a winning time of 19:23- outdistancing the field by just over 50 seconds.