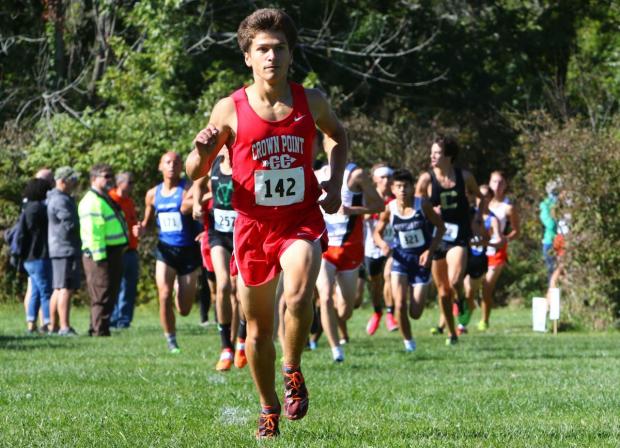 Geno Christofanelli looks to be the guy to beat this weekend at DAC.

The Duneland Conference Championship takes place this Saturday. With rising talent, and a handful of potential state teams, this conference championship will bring plenty of action this weekend.

Starting on the individual side, the favorite has to be Geno Christofanelli. He comes into the meet with a season best of 15:29. He shouldn't have to run anything that fast Saturday, and with a tough Regional and Semi-State, we shouldn't see anything to flashy out of Christofanelli. But wait? There has to be some competition for Christofanelli. Of course! Connor Havens and Jack Acton are two guys we shouldn't underestimate and should be close with Geno through the first 2 miles. If these 2 can stick with him through 3 miles, we could see a kick to the end and will make for a great finish. Other frontrunners to look out for are Quinton Bock, Cole Raymond, and Joey Roytan. Places 2nd through 8th could go a few different ways and could make for an interesting race to the finish. Something sub 15:50 should get the job done, but on the right day, these guys could run something in the 15:30 range.

Shifting to the team side of things, the battle for the DAC Championship will be between Crown Point and Valparaiso. Crown Point has the advantage, with a key low-stick runner in Christofanelli and Crown Point has the potential to place 2 in the top 5. If Crown Point races how they have all year, they shouldn't have a problem taking home the DAC Championship. We know Valparaiso will be in the conversation all meet, and if Crown Point slips any, look for Valparaiso to capitalize and stun the Bulldogs. This battle could go either way, and it's going to come down to who can step up and put their team on top. LaPorte is another team we could see make some noise come Saturday. We talked about Havens earlier, and if he goes for it, we could see LaPorte sneak into the 2nd position.

On the girls side, this race could go a few different ways. The clear favorite is Maddie Russin of Crown Point. She holds a season best of 18:33 and like the boys race, she shouldn't have to run anything crazy fast to get the win. This race will likely be a conservative race and save the speed for the rest of the postseason. Bailey Ranta of Chesterton comes into the meet with a season best of 18:50, and should be with Russin most of the race. If she can stick with her, these 2 could run something a little faster than expected, and make for an exciting race. Russin's teammate, Jaelyn Burgos always seems to really come around in the postseason, and it's possible that she could be right up with these 2 throughout the race which will be huge on the team side of things, and for the individual race. Aubree Foreman, Hannah Roth, and Ava Gilliana are three names to look out for and should be towards the front most of the race.

Now to the team battle. Right now the DAC Championship is between Valparaiso and Lake Central. Valparaiso has Foreman, Gilliana and Maldia, all who should place inside the top 10. Same thing goes for Lake Central, they have 3 that could be within the top 10. Valparaiso has the edge having Gilliana, but Lake Centrals Hannah Roth is not far behind and these 2 will be battling throughout the race knowing the impact they will have on their chances of taking home the team championship. The battle between these 2 teams will be something to watch throughout the race and at the end 1 point could separate them. Crown Point looks like the 3rd place team in this meet, having Russin and Burgos helps, but their 3-5 are farther back compared to Valparaiso and Lake Central. Regardless, this team battle will be one of the headlines going into the meet.