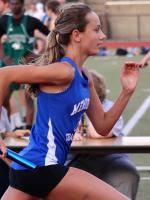 The Top 25 Eastern Relays Female Performances All-Time...
As we get ready for the 2022 Eastern Relays, let's take a look at the top marks in each event....

Pre-State Meet Course Preview Opportunity At THSB Invit...
Look for some great races coming out of Cross Country Town, USA. The THSB Invitational is going to be good!...

Future Stars Freshmen Girls Team of October...
Check out the 21 top freshmen girls XC performers nationally from the month of October below split into a first, second, and third team of Future Stars. Presented by Hoka One One. ...

Cream of the Crop Girls from the Midwest (10/2)...
A list of the top 50 fastest girls individual 5K times in the Foot Locker Midwest Region states prior to October 4th weekend....

Sapienza-Wright & Lacy Named to Future Stars of XC Team...
Two members of the Class of 2018 have been named to the HOKA Future Stars of September Teams on MileSplit. ...

Future Stars Freshmen Girls Team of September...
Each month, MileSplit will be selecting 21 freshmen girls as part of the Future Stars of XC Team presented by Hoka One One building into the end of the year team to be finalized in early December. Che...