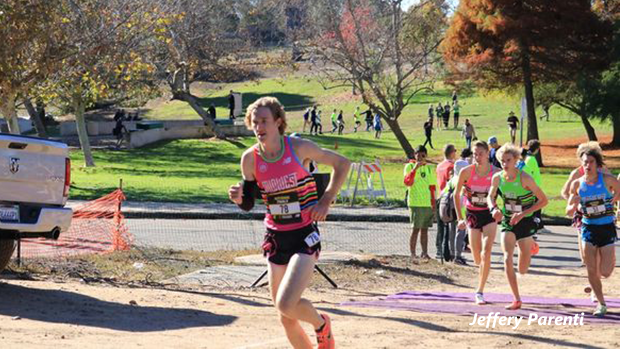 Carmel's Kole Mathison led the way for an outstanding Indiana day at the Eastbay Cross Country Nationals in San Diego Saturday with his fifth place finish. The historic Balboa Park course was ready for all comers on the perfect morning and Indiana let it rip. 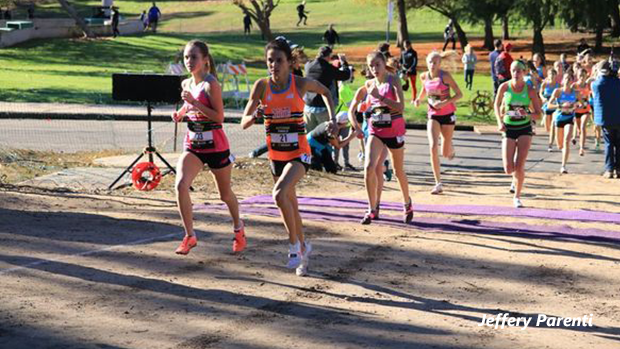 Sophia Kennedy, left in pink, in the lead early in the race.

In the first race, Sophia Kennedy from Park Tudor led early on with a strong pack that included former qualifiers and the RunningLane National Champion, Natalie Cook from Flower Mound. Kennedy led for most of the first mile while staying with the pack through the toughest hill section.

She never really fell far from the leaders. Kennedy stay within striking distance of the chase pack after Cook took off during the big downhill section on the first lap. When Kennedy did break from the lead chase group, she stayed close enough to use a nice last kilometer to charge across the finish line in seventh place. Her time of 17:34 was outstanding on the traditionally tough course. She only found herself four seconds from a Top 5 overall finish.

Kennedy was awarded with Second Team All-American for her placing. Gretchen Farley comes down the hill at Balboa Park.

Her Park Tudor teammate, Gretchen Farley, was the next Indiana finisher. Farley ran a strong race to just break 18:00 on the challenging course. Her 17:59 was good for 20th place and Honorable Mention All-American status.

Lowell's Karina James wrapped up her absolutely stellar high school cross country career with a great 23rd place finish. Her time of 18:15 helped earn her Honorable Mention All-American status as well. James will run at Toledo this fall and completed what will most assuredly be an IATCCC Hall of Fame career- although she will no doubt add to her career marks this spring. Kole Mathison, Carmel, put his stamp on the field right from the beginning. The opening group went through the first 800m in about 2:15 and Mathison decided to take the reigns. He led through a strong 4:45 mile and up the famous hill. When the lead changed and the field started to string out, Mathison hung on bravely through the next 2k to leave himself in a great position to charge home to the finish line.

Mathison crossed the line in 15:22. His fifth place finish earned him a podium spot and First Team All-American status to cap a great season. Mathison will also be nationally watched even closer after his performances leaves him as the top returner for next year's race.

Indiana was almost done with a historic day in California- almost because storming home in eighth place was Angola's Izaiah Steury. Steury ran a great race after what appeared to be a shaky start. For much of the race, Steury was not in the picture with the Top 5 or the next chase group. As the race quickly developed passing the finish line to start the second loop, you could start to see that stride so familiar to Indiana fans getting closer and closer. Izaiah Steury fights off a tough early start to rebound for 8th place.

Steury ran a great race to move into the Top 10 and earned Second-Team All-American status. Steury will take this momentum directly to Notre Dame where he will no doubt have great success while continuing his Indiana ties. Like James, Steury leaves a huge imprint on Indiana's distance running scene. He is another HOF runner. Unlike James though, this is Steury's last race in high school but he certainly went out on top.

Although Indiana will now turn to track, the 2021 season was amazing and ended with huge performances that will leave us begging for the first indoor meets in January.