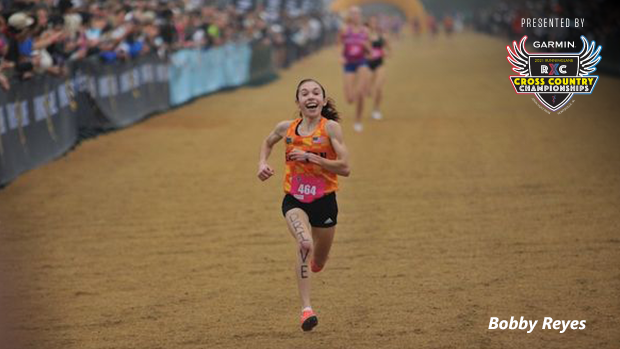 The Indiana contingent was large and strong at the RunningLane National Championships this past Saturday in Hunstville, Alabama. The weather conditions were perfect. The course was set up ideally for racing fast. The majority of the best runners in the United States all came together on the same day to race each other. These factors all combined to make this possibly the fastest and best high school cross country race in a long time, perhaps ever.

The Gold Race was the premiere race in each division. Lily Cridge from Bishop Chatard bounced back from a rare loss at the Midwest Regionals to run possibly the race of her young career. Cridge jumped out with the leaders early in the race and hung on through a fast first mile.

She then became the aggressor after the halfway point and pushed the pace of the chase group. Cridge took off after the 3k mark and left the small group of three chasing Natalie Cook from Flower Mound. Cook had a commanding lead but the rest of field had no chance of catching Cridge either as she drove home over the last 1200m.

The only race left for Cridge was with the clock. Cridge's excitement boiled over with great emotion as she sped across the line in an all-time Indiana best of 16:22 for the national runner-up finish.

Indiana was far from done with huge female performances. Julia Kiesler from Columbus North ran outstanding and picked her way through the field the entire way to run 17:09 on the blisteringly fast course. Her 26th place finish led the Columbus North group to a 12th place finish overall as a team.

Kiesler's teammate, Lily Baker, ran another huge PR to come home in 17:40 despite running with an apparent injury.

The 12th place finish for Columbus North was the best team finish by any Indiana team Saturday. The Bull Dogs had five PR's on the day to have arguably their best team performances in school history with an 18:05 team average of their five scorers.

Clara Crain from Edgewood High School ran 17:44 to take the runner-up spot in the Silver Race to end a great comeback season after starting the year with a terrible knee injury.

Kendall Martin from Brebeuf nearly herself broke 18:00 with an PR of 18:03 to add to Indiana's total of outstanding performances. Mathison took off in a blistering 4:30 mile, just off the lead group by about a second. Mathison essentially stayed with the leaders through the 2.1 mile split before the last hill and the sweeping last kilometer that featured a nice sloping downhill finish separated the runners.

Mathison lost about 15 seconds to the winner, Colin Sahlman of Newbury Park, over that distance but still finished strong to maintain his Top 10 finish. Young's time was 14:03 to establish a new national all-time best of 14:03 for a cross country performance. His two teammates, brothers Leo Young and Lex Young, were only two seconds back as both were timed in 14:05 to also better the mark. The Indiana list of individuals was filled with PR's after Mathison.

Abe Eckman from Jasper ran a superior 14:37 to run the race of his life thus far. Eckman's time garnered him 22nd overall at the national meet.

Reese Kilbarger-Stumpff from Columbus North ran 14:42 to finish 34th in the deepest boys field ever assembled by time. Fellow All-State runner Spenser Wolf from Forest Park was the next Indiana runner. Wolf also broke 15:00 easily with a fine 14:53 to claim 56th place.

Krishna Thirunavukkarasu came across the line in 14:54 for 58th place in the meet to lead Brebuef's team.

Will Conway from Floyd Central and Collin Stevens from Brebeuf both broke 15:20. Each runner was timed in 15:19.

Brebeuf Jesuit followed up their state title with a fine 14th place finish. They were only 26 points from a Top 10 finish in the insanely tight team race. Hamilton Southeastern was 23rd in the team competition and was followed closely by Columbus North's 27th place team total.

There are still about five Indiana runners who will compete in the Eastbay National Championships so we are not done yet!