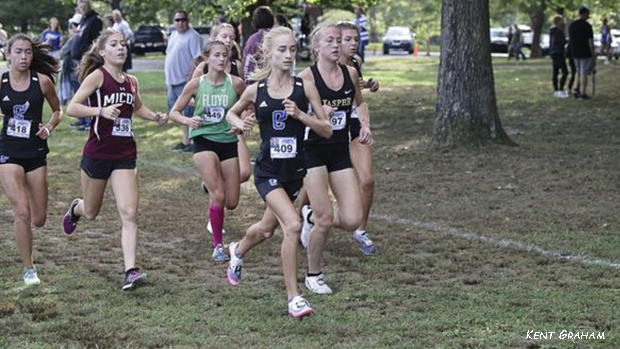 The Southern Indiana portion of the IHSAA State Tournament series kicked off Saturday under great conditions- that began to quickly heat up both in the air and on the course. There were several great team performances, a few surprises, and probably many tears of joy (a few sad ones, too).

We will continue our coverage of the weekend with results from the Sectionals that will feed into the Brown County Semi-State. The eight Sectionals include Brown County, Austin, Bedford North Lawrence, Terre Haute North Vigo, Crawford County, Jasper, South Knox, and Evansville Mater Dei. The top 5 teams and the top 10 individuals NOT on a qualifying team move on the Regional next week.

The Columbus North Boys team was the clear favorite and showed why by scoring only 27 points against the field Saturday. Kellen Hottell led a pack that had only a 1-5 gap of 16 seconds. Seymour won a close battle against host Brown County, 56-64, for the runner-up spot. Brown County was led by the individual champion, Chase Austin, who came home in 16:20 for the win. Martinsville and Brownstown Central took the final two spots for next Saturday's Columbus North Regional. Jude Bane led Seymour with a runner-up finish before the pack started from Columbus North.

It was a near repeat in the girls race with Columbus North scoring 30 points to take the title over runner-up Seymour's 63 points. Columbus East and Martinsville tied at 71 with East winning the tiebreaker. Brownstown Central won the last spot into the Regional with 134 points. Hadley Gradolf held off Ellen White for the individual title with a strong last kilometer to win by 13 seconds in 19:29.

The host Austin boys and Jennings County staged a complete two-team battle as runners from those two schools comprised the first 12 finishing positions and essentially made this a dual meet and then an 8-team Sectional for three spots. Austin held off the tough Jennings County team 24-31. Freshman Carlos Mata from Austin led his team with the individual title. Mata crossed the finish line first with a time of 16:54 to best Eli Wahlman from Jennings County. Madison Consolidated took 3rd in the meet with Southwestern (Hanover) sliding past Switzerland County for 4th and 5th to qualify for the Columbus North Regional.

The Girls race could not have been more opposite with high, close teams scores throughout the Top 7 teams. Charlestown used a 2-6-11 race from its top three runners, led by Jessica McCoy at the runner-up spot, to keep a slightly comfortable victory 66-79 over Switzerland County. The next few teams stayed close through the all of the qualifying teams. Jennings County was only 5 points behind Switzerland County with 84 and just ahead of Austin and Silver Creek who had respective scores of 91 and 93 points. Freshman Claire Rodgers from Switzerland County was the individual champion with a time of 20:10.

The Bedford Sectional was dominated by the two Bloomington schools on the boys side of the meet. Bloomington North prevailed over Bloomington South 25-32. The two combined to take the first 9 overall spots and 13 of the first 16 overall places. Nolan Bailey led Bloomington North with a winning performance 16:44 to stay just ahead of Bloomington South's Zander West, who was 8 seconds back. Bloomfield, Edgewood, and Orleans battled to finish in that order with scores of 123, 128, and 136 for a very close 3-4-5 team competition.

The girls race was equally strong for the team title as Bloomington North swept the titles, beating Bloomington South 33-48 despite Bloomington South's Lily Myers taking home the individual title. Clara Crain from Edgewood was the runner-up as she returns to racing this fall. She helped lead Edgewood to a 3rd place finish ahead of Eastern Greene and Bloomfield to compete at the Regional next Saturday.

The Girls Sectional results nearly mirrored the previous race. Northview proved the class of the field scoring only 21 points in the meet. Terre Haute South and North each staged a battle for the runner-up spot with South coming out on top 63-96. Clay City finished 4th with 143 points and Owen Valley grabbed the last spot in the Bedford Regional with 158 points. Northview's Gnister Grant beat runner-up Peyton Smith from Linton-Stockton by 50 seconds, coming across the line 19:22.

The Floyd Central Boys won the Crawford County Sectional as expected with a strong team performance. They outdistanced New Albany 38-75 for the title. Borden, South Central (Elizabeth), and Corydon Central took spots 3, 4, and 5 in that order to qualify for another week in the tournament. Maddox Baker from South Central pulled out the somewhat surprising individual title over Aiden Lord and Aaron Lord from New Albany and Will Conway from Floyd Central. Baker's time of 16:36 kept him safely in first for a 23-second victory.

The Floyd Central girls were not to be outdone by their male counterparts. They posted a near-perfect score of 16 points to take the title over Corydon Central. Savanna Liddle led a 1, 2, 3, 4, 6 finish for her teammates to secure the title. Her time of 20:12 kept her clear for the title. New Albany (97), Borden (107), and North Harrison (146) claimed the qualifying spots for the Regional.

The Jasper Sectional was dominated by the host school as they put four runners in the Top 10 and took the overall team and individual titles as well. Abe Eckman won the individual title to lead Jasper to a 1-3-4-8 finish from the first four runners. As expected, Eckman battled Forest Park's Spenser Wolf to the finish line for the win by .6- with the two timed in 16:16:22.6 and 16:23.2. Wolf led Forest Park to the runner-up spot in the meet over Tell City by 18 points, 58-76. Heritage Hills and Perry Central took home the last two places that move on the Regional.

The Girls race also heavily dominated by Jasper as individual champion Andi VanMeter won the individual title, by 6 seconds over Ellie Hall from Forest Park in 18:51-18:57, and led her team to 5 finishers in the Top 12 of the meet. Their 27 points put them 41 ahead of Forest Park for the team title. Heritage Hills found themselves equally distanced from 2nd and 4th with 90 points. Tell City and Northeast Dubois finished 4th and 5th to claim the opportunity to qualify for the Semi-State in this week's Regional.

This highly competitive Sectional saw the host South Knox Boys team win the team title in a two-team race for the title against Gibson Southern- 28-46. South Know put all five scorers in the Top 10 to put distance between themselves in Gibson Southern. Jacob Siewers led South Knox to the title sweep on the boys side by taking home the individual title in a time of 17:14 to easily win the race. Pike Central and Barr-Reeve took the next two spots with a tight battle to advance to the Regional. Vincennes Lincoln pulled out the final spot by 7 points over Princeton Community to advance as a team in 5th place.

South Knox pulled off a slight upset over Princeton in the meet. The host girls beat Princeton 44-58 with strength of their #5 runner who beat Princeton's #5 by 19 spots. Barr-Reeve was 3rd with 79 points, Pike Central 4th with 89, and Gibson Southern was 5th with 92 as some of Southern Indiana's familiar names continued to qualify for the next round. Xavery Weisman from Pike Central was one of the few freshmen to win a Sectional title as she defeated Heidi Meade and Haley Meade of Princeton who were 2nd and 3rd, respectively.

Evansville Mater Dei Sectional Recap
Castle was the prerace favorite they lived up to the expectations by winning the title with 42 points in a relatively balanced overall meet. F.J. Reitz was the runner-up with 61 points- just ahead of Evansville Central who finished with 69 points. Reitz Memorial was 4th with 87 points to join 5th place finished Evansville North who snagged the last spot with a 113 tally to run at least one more week. Alexander Hooten of Evansville Central was the first male to cross the line with a time of fine time of 16:01 to outrun Trevor Monroe of Castle by 16 seconds to claim the title.
F.J. Reitz put all five scorers in the Top 10 to easily take the team title over Castle, who also ran strong, 30-46 for the Sectional title. Castle was a strong runner-up with 46 points. Evansville North outran Evansville Reitz Memorial and Mater Dei with respective team scores of 89-93-102. Emma Gresham of Boonville High School beat Cordelia Hoover of F.J. Reitz by 23 seconds, running to a winning time of 19:45.