The fall of 2020 was, without question, one for the books. The Pandemic caused a bumpy beginning to the season and altered the IHSAA State Finals a bit at the end.  In the middle, though, we had a mostly smooth season and never truly got the season to the threat of being cancelled. This allowed runners to train and focus on a great season. Two juniors made this season a great one for fans as Izaiah Steury, Angola, and Karina James, Lowell, both ran outstanding state meets to give themselves a chance for history in 2021.

There have only been 12 male and 6 female athletes repeat as state champions in Indiana history. This dates back to the 1940's for men and 1981 for the women. The champions list is dotted with underclassmen winning one year but not repeating as a senior, especially on the women's side.  This stat suggests an uphill climb for both Steury and James.

Izaiah Steury had a great season in the fall and was undefeated in the state tournament pushing to an almost 11-second victory on the challenging LaVern Gibson course. Steury handled every challenger with a relentless pace that broke nearly every runner after 4k. He followed his state title performance by running a blistering 14:47 at the Running Lane National Championships in Alabama later in the fall.

Steury's track season was anything but pedestrian as he ran incredible races all winter and spring. He was able to break 9:00 in the 3200m run both indoors and outdoors while also running times of 1:52 in the 800m and 4:10 in the 1600m. Steury won the 1600m and 3200m runs at the Midwest Meet of Champions in Michigan with tremendous heat and has top national finishes in both the 1600/3200m runs. All of the data points to Steury being in a great position to defend his state title this fall- but it is far from certain. He finished 4th in the 3200m at the IHSAA State Finals and junior Kole Mathison from Carmel was in front of him there with two other returners only a handful of seconds back and there are also some outstanding 1600m runners with XC credentials returning as well including Reese Kilbarger-Stumpf from Columbus North.

Karina James faces an even deeper field of runners this fall as the girls distance runners in the state absolutely smashed the track scene this year- both in Indiana and at a national-level. James was right in the thick of the competition, though, earning two tough medals at the State Finals completing the 1600m and 3200m double. James was 6th with an almost unbelievable time of 4:52 for that deep in the race and 4th in the 3200m with a time of 10:38. That strength will be needed to overcome both the course and the field. James does have a great capacity for turning up her level at round of the tournament and has really shown to achieve in a huge way under the brightest of stages. 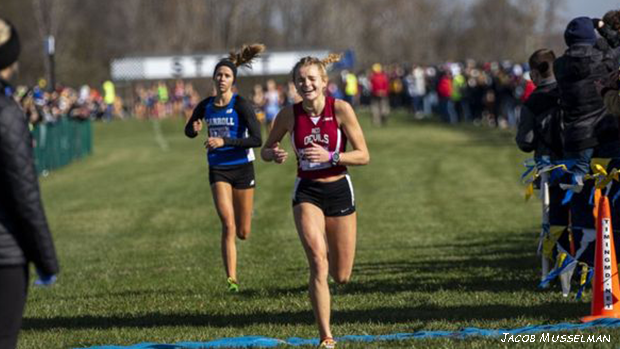 James will face tests from several strong runners that could start with Addy Wiley from Huntington North who ran 4:38 for the mile this spring. Lily Cridge from Bishop Chatard was very strong this spring, almost breaking 10:00 for the 3200m and breaking the state meet record in the event. Sophia Kennedy also broke 4:50 this summer and has a 10:14 3200m time as well. Nicki Southerland from Delta will also be one to watch after having one of the best freshmen campaigns in state history. James met every passed the test last year and should be right in the mix to make history this fall.

Should Steury and James repeat this fall, it will be an amazing feat. Their performances will elevate them into a select class filled with IATCCC HOF runners.The strength of both the boys and girls fields will undoubtedly make the achievement even more memorable and one for the books.