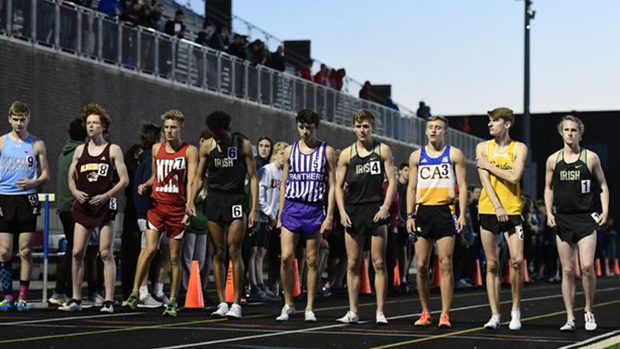 MileSplit will be on-site for live stream coverage and archived video!

Down below are 5 girls and 5 boys you should watch for!

The reigning Indiana 1600m state champion, will return to the track in a meet that spotlights her top event. Coming off a very strong indoor season, Wiley looks to be a much stronger and better runner than where she was as a Freshman when she won her state title. With marks like 2:09.69 in the 800m and 10:16.91 in the 3200m, look for the Huntington North junior to drop a major mark this Friday.

Annalyssa Crain returns to the competitive atmosphere as she returns from injury that derailed the end of her cross-country season. The University of Illinois commit has never broken 5:00 for the 1600m, could this be the night that she does it? Her sister, Clara Crain will also be an intriguing runner to watch at this event. The younger sister had a breakout season on the grass that ended with an 18th place finish at the state meet. Her current PR is 5:12.74, can she go faster?

Cridge, much like Crain is returning to competition after her season was cut short by an injury. Cridge did some amazing things last summer, such as going 4:57.49 in the 1600m at the Summer Finale Distance Open and going 10:30.07 in the 3200m at the Music City Distance Carnival. She opened her season in a strong 10:46.78 performance for the 3200m, she may be looking to challenge for a top three finish here.

The Penn State Commit had an amazing indoor season running the 1600m that concluded with a 15th place finish at the adidas Indoor National Championship. Duffus was one of the premier runners in the nation this past cross-country season and was the favorite to win the state meet until Karina James pulled off the win. That loss has seemed to light a fire under the Fort Wayne Carroll Senior. Running 4:46.03 this past indoor season, that puts her in line to challenge Wiley setting this up to be an exciting race.

This will mark the season debut of Baker on the track. The North Central Senior had an amazing cross-country season that saw her take 4th at the State Meet. With not competing in over a year, you can assume with her rapid rise that she will run much faster than 5:17.11 which is her Pr at the moment. The question is how far under? Can she break 5:00? We will have to watch to find out.

Coming off a sub 9:00 3200m during the indoor season, Mountain has to be fired up and ready to drop a sizzling time on the track for the 1600m distance. One of Ohio's premier cross-country runners from this past season, the University of Virginia commit will be all-in on the 1600 and will represent Ohio well.

Sophomore Kole Mathison has become a household name in the hoosier state. Mathison made one appearance indoors where he dropped a 4:18 at the Dave Fulkerson Classic. Mathison holds a mile PB of 4:18.22. He will make his first outdoor showing tonight in the fast heat of the miracle mile. Mathison should be up front battling with the leaders and has a good shot at bettering his PB!

Georgetown commit Lucas Guerra has had quite the start to the 2021 season. He competed in a handful of indoor meets including adidas Indoor Nationals where he took home 8th in the mile with a time of 4:16.51. Guerra will look to better that tonight in a loaded field. If Guerra can stick up front with the lead pack, he could be someone to watch take home the W.

Will Jefferson has had a quite start to the 2021 season only racing at the Louisville Indoor Games so far. He did sweep both the one and two mile races that day. The Liberty commit owns a mile PB of 4:18.55. Jefferson should be ready to go tonight and has been known to make some last minute moves to steal the win.

Kai Connor will enter this race as a dark horse. He doesn't quite have the PB's as the above guys but has the speed and grit to make some noise up front. He owns a mile PB of 4:39 and a 1600 PB of 4:23. If Connor can race smart and strategically, Connor could end up taking home a top 5 finish when everything is all said and done.