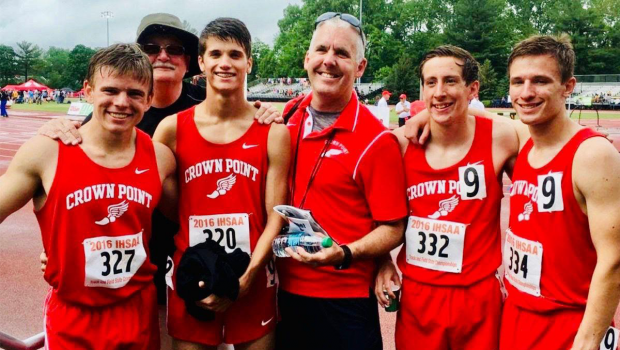 Ask anyone in the northern Indiana area about Crown Point cross country or track and they'll likely tell you a story about Head Coach Keith Iddings. Anyone you ask, will tell you how much of an impact Coach Iddings has had on their lives. Whether you're an athlete, fellow coach, student or parent, Iddings has touched the lives of nearly everyone he has come in contact with. After 23 year of dedication to the Bulldogs of Crown Point, Keith Iddings is stepping away from coaching to be closer with his growing family. For the past 23 years, Crown Point High School in Northern Indiana has had the pleasure of one cross country coach, Keith Iddings. In that time, he has led the team to 13 appearances at the IHSAA State Finals in cross country, with an appearance every year since 2010. He has also led the track & field team for the past 16 years acquiring many team titles in conference and sectionals along the way.

So what all did Iddings accomplish in his 23 years? A LOT.

He was the IATCCC President from 2011-2012 and before that was the Vice President in 2010. He has served as an At-Large Council Member for many years as well. Iddings has also been a coaching staff member for 9 years for the Mid-East Meet of Champions, a end of season meet for seniors in Indiana, Ohio, Michigan and Illinois. Over the past 23 years, he also continued to educate himself and learn more by attending any coaching clinic he could.

Keith will continue to teach math at Crown Point, but he has decided to step away from coaching so that he can start to experience moments with his grandchildren and not miss out on too many moments while they are still young. Iddings with his wife and three grandchildren in 2018

This fall, Erik Forehand will take over the reigns as the head cross country coach for the boys program. For the past three years, he's been working directly under Iddings as the assistant coach. Forehand views this promotion and his time working with Keith Iddings as an honor as he begins to take over a program with such a long history of success that he hopes to continue. "Coach Iddings has been a phenomenal mentor for the past three years, serving as his assistant. His passion for the sport, superb leadership, and high standards for each individual on the team translated to success in racing, academics, and life." Forehand had to say of him.

We also caught up with a couple of Crown Points athletes to hear their reactions to Coach Iddings retirement as well as what he meant to them. Rising seniors Noah Thomas and Sebastian Ashbach have learned more than just how to be a better runner from Iddings, they've learned how to be better, more mature, men.

"To me, Coach Iddings has been more than just a coach, but a role model. My philosophies on both running and life have changed so much over my time under his leadership. His guidance has made me a better man and he has taught me many things that I will carry with me for the rest of my life." Ashbach said of his coach for the past three years.

Iddings has also helped these young men improve in their running abilities as well, as expected from any coach.

"In the last two years, I've improved my time from a 21 minute 5K to an 18:50 5K. That's such a huge improvement and I wouldn't have been able to do it without Coach Iddings support." Thomas said of the improvements he's been able to make under the guidance of his coach.

To end, Noah Thomas had this to say "No matter if the athlete was the best or worst on the team, Coach Iddings was always there for you no matter what. The way I have matured throughout my tenure at Crown Point signifies how much I appreciate all he's done for not only the athletes for Crown Point High School but for the city of Crown Point as a whole. Thank you Coach Iddings"

Iddings impact on the Crown Point community will last a lifetime and extends further than we can likely imagine. We wish Keith Iddings the best in this first stage of retirement but hope he'll still find his way to a few meets every now and then.

Crown Point Team Rankings - based on the MileSplit database, may have inaccuracies