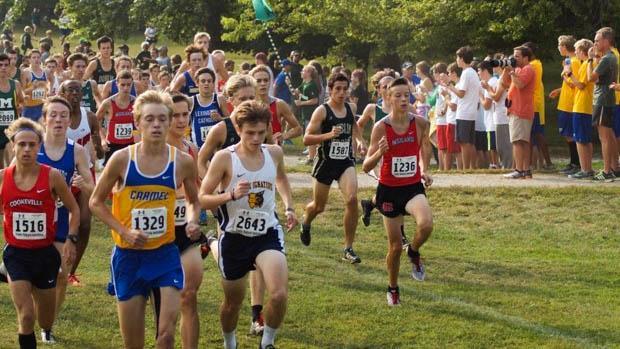 The Trinity/Valkyre Invitational is not only the oldest Cross Country meets in Kentucky, but it is one of the largest, and most prestigious in the nation. Last year, they had 4,491 runners from 134 schools, from eight states participate. This year, is shaping up to be even bigger with schools registered from the ten states of Kentucky, Indiana, Ohio, West Virginia, Tennessee, Florida, Georgia, Alabama, Missouri and North Carolina.

Some of the best from Indiana will be running on Saturday at E.P. Tom Sawyer Park, site of the 2017 NCAA Div I Cross Country Championships in November. Three schools from this week's IATCCC Boys Poll will be in the Seeded race, the most elite race of the day. Representing Indiana will be #1 Carmel, #4 FW Carroll, and #16 Christian Academy of Indiana.

Carmel, who fell in the Flo50 this week to #7 after resting their varsity runners at the Eagle Classic, will have their full team back this Saturday as they face their toughest competition of the season. They will be going up against Flo50 #11 St X. From Louisville, who also slipped a bit in the rankings after resting their top three this past Saturday. Last year, the Greyhounds lost to St X. by less than 10 points.  Another team that Carmel will need to lookout for is Broughton from North Carolina, who won last week's Jungle Run, with their scoring 5 all coming in under 16:13, with a 22 second spread between them.

Indiana will be well represented in the lead pack. Evansville Memorial's Matthew Schadler will be running as an individual in the Seeded Race. After last week's blistering 15:08.8 at the Eagle Classic, he has shown he has the speed to compete with some of the best. Caleb Futter from Christian Academy of Indiana finished 3rd in that same race at Brown County with a 15:18.4, and is coming back to Trinity after finishing 7th last year in the Seeded Race as a sophomore. Expect him and teammate Skylar Stidam to battle with Cole Powers and Conner Goetz from FW Carroll for some crucial low sticks for their respective teams.

They will have a tough task ahead of them for the individual crown as Dustin Horter from Ohio's Lakota East, Flo 50 #9 Individual, will be in the field. Horter has run a 14:56 this season, but there will be a large pack from Indiana right be hind him, hoping to be pulled to a sub-15 time on a fast course.

The ladies seeded race will be an showcase of just how good Girls Cross Country in Indiana is this year. With #1 FW Carroll, #2 Zionsville, #4 Carmel and #8 Floyd Central racing in the Seeded Race, and all of them took to dominate the team podium.

FW Carroll comes in as not only the top school in Indiana, but #14 in this week's Flo50 rankings. They are followed closely by Carmel who comes at #16. They faced off two weeks ago at the Marion Invitational, where FW Carroll won handily over the Greyhounds by 54 points. I see nothing changing from that, and think that FW Carroll will win on Saturday with relative ease. I also think that the race could play out with Indiana taking 4 of the top 5 team positions on the podium. Zionsville and Floyd Central are both top tier teams who cannot be counted out. The lady hoosiers this year are some of the best runners in the nation, and that will show on Saturday.

Racing for the individual crown, Phoebe Bates from Carmel comes in as one of the best in the field. She will be chased by a pack of FW Carroll runners, led by freshmen phenom Zoe Duffus. Zoe beat her two weeks ago at Marion, but Phoebe is coming off a blistering 17:39 last week that she made look easy. Sophia Rigg from Zionsville will be in front too, looking to break 18 minutes for the first time on a fast and flat course.

All in all, it is going to be an excellent day for Hoosier Cross Country. Weather looks great with clear calm conditions in the forecast. The temperatures will be a bit higher than the previous weeks, but should hold in the low 70's by the time the elites hit the course. Indiana should come out with two team titles and half of the Top 10 runners in both Seeded Races.