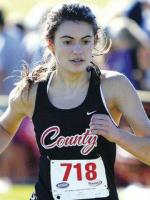 All-Time Rankings: Girls Top 500 Times At Memphis Twilight
Memphis Twilight marks the start of the cross country season for the 901 so let's take a look at the fastest times ever run a Mike Rose Soccer Complex....

KY Girls Own 9 of Top 10 Spots in KY-IN Border Clash Hi...
Check out the Top 250 Times Run in the 4-Year History of the KY-IN Border Clash history. Former Daviess County and current UK runner Whitney O'Bryan has #1 and two more in the top 7....

A Tribute to the Class of 2014: The XC Game Changers...
The 2014 Cross Country Season is among us with pre-season races starting this week for some.  To really understand this season coming up in some classes, especially in AAA Girls you have to talk abou...

10 More Pictures Added: Check out KY College Signing Pi...
National Signing Day is Here!!  Once you signed on the dotted line, make sure to get KYtrackXC.com a picture (kytrackxc@gmail.com)...