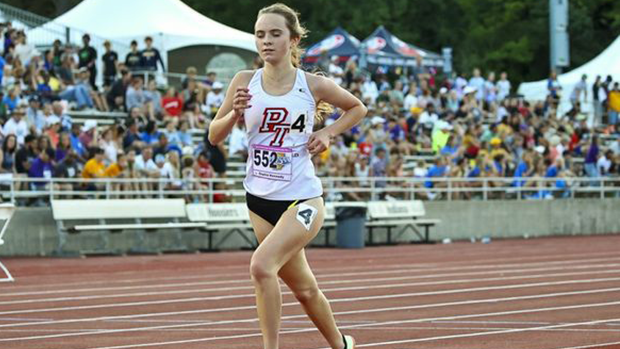 The incoming senior has been a force in Indiana distance running since her freshman season in cross country, where she finished fifth in her first state finals. She has been at the front of the field since that race. Kennedy has three Top 5 finishes already in cross country and two Top 3 finishes in 3200m at the state meet.

This past season, hampered by some winter and early season setbacks, Kennedy rebounded nicely to run 10:25 in Bloomington and finish a close second in the 3200m. She outdistanced third place by over 13 seconds as she and Nicki Southerland from Delta raced away from the field.

Kennedy had a tremendous cross country season this past fall as well. After finishing fifth both her freshman and sophomore seasons, she moved up to third in one of the deepest and most decorated Indiana cross country fields ever assembled.

She then finished 3rd at the Eastbay Midwest Regional in a strong 17:18 on Kenosha's challenging course. Kennedy then ran to a 7th place and All-American finish at the finals in San Diego. Her time of 17:34 on the hilly Balboa Park course put her only four seconds from a Top-5 finish.

With this commitment settled, look for even bigger things from Sophia this fall.