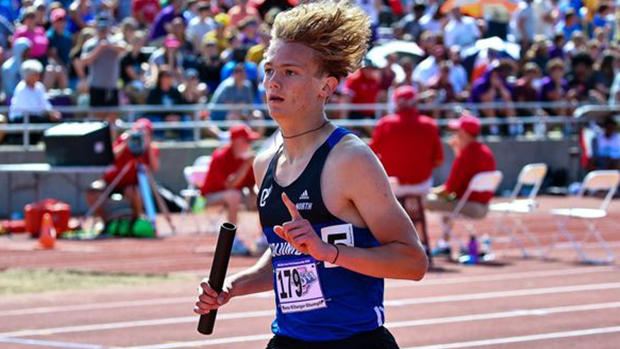 The meet started off with an Indiana State Meet record in the 4x800m and kept producing amazing performances from there.

The 800m was fast from the beginning and produced a huge 1:51.84 performance from Kai Connor of Westfield. Connor was able to put a gap on the field after the 400m mark and stayed strong all the way home to secure the title. Xavier Wills from Warren Central, Matthew Newell of Columbus North, and Nate Killeen of North Central fought hard up the final stretch to finish 2-4, respectively. The trio were timed in 1:52.69, 1:53.26, and 1:53.46. In the hurdles, one name stood very tall on Saturday night- Brownsburg's John Colquitt. Colquitt was the runaway winner in both events. His time of 13.90 was just shy of the all-time state mark of 13.64 and gave him a comfortable half of a second victory Knox Willis of Zionsville.

Doubling back, after placing in the long jump and helping his team to a 4x100m title, Colquitt took another victory in 300m hurdles. His time of 37.92 outdistanced Tyler Tarter of Fishers who came home in 38.57. Colquitt's 22 individual points, along with the 10 helped earn in the relay, where a huge component of Brownsburg's runner-up team performance.

Anthony Brodie of Evansville Reitz Memorial took home a very fast and crowd-pleasing 100m title in 10.57 to set the tone in the first individual track final of the night. His fast time just held off Lance Pratt, FW Concordia, and Plez Lawrence, Kokomo, and Connor Maple, Plainfield. That trio was timed in 10.76, 10.76, and 10.78.

The 200m dash saw a tight field run an amazing race to the line. First through sixth were separated by a tight 44 hundredths of a second. With two injuries narrowing the field down quickly, Kemari Robinson of Indianapolis Cardinal Ritter held off the pack with a fine 21.49 to take home gold. Pratt, doubling back, took home second with a 21.54. Nayyir Newash-Campbell of Plainfield, Brandon Wheat of Center Grove, David Slick of Leo, and William Newby of Sullivan rounded out the fast finish.

The 400m dash saw a great finish at the line with Newash-Campbell winning to set up a great night for him individually and solidify the team title for Plainfield. He just held off Nickens Lemba of Southport at the line. The pair were timed in 47.45 and 47.66, respectively. The two juniors could be setting up a rematch for next year that might threaten the 46.99 state meet record.

The boys 4x100m relay was one of the most exciting events of the night. Brownsburg and Plainfield, staging a battle for the team state title, went head-to-head for the victory. Brownsburg, led in large part by double-hurdle winner John Colquitt, sped to a 41.60 victory. Plainfield was just behind in 41.92. Evansville Harrison and Harrison (West Lafayette) both also came home under 42 seconds. They were timed in 41.96 and 41.97 to complete the fast relay.

The last track event of the night did not disappoint. The 4x400m relay saw Fishers take home the title in 3:18.85 as they pulled away from the field for a comfortable victory. The real battle came next as a wave of teams came off the last turn together, so close that a baton was apparently knocked out of Brownsburg's hands as they all moved for position. Including the oter sections, places 2-9 were within 1.8 seconds of each other. Plainfield, finishing up their state title night, took second in 3:20.38 to hold off the rest of the field.