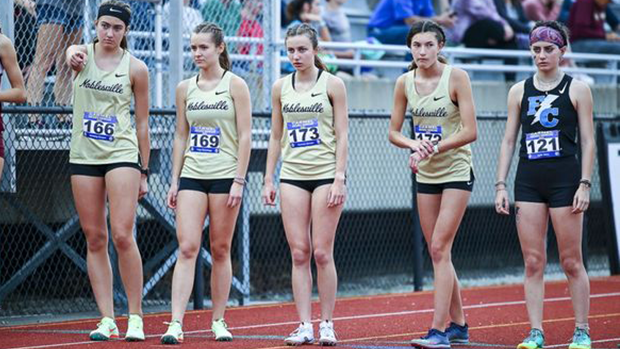 The Hoosier Crossroads Conference girls Track and Field championships took place Tuesday evening at Zionsville High School. The meet showcased 6 of the top 20 teams from this week's IATCCC girls teams rankings. Event results and team scores showed just how competitive these teams are in what is arguably the best conference in Indiana for track and field.

The Noblesville Millers were crowned the champions of the HCC with 125 points, just 11.5 points ahead of the runner-up Hamilton Southeastern Royals. The Zionsville Eagles were third with 99 points in a very competitive meet amongst 3 Top-5 ranked teams.

Noblesville's victory was backed by strong performances from the distance events, throws, and hurdles. In the 800 meter run, the Millers had the top two places with sophomore Summer Rempe as the winner in 2:17.21 and teammate freshman Brinkley Cooper, the runner-up, right behind Rempe in a time of 2:18.67.

Rempe and Cooper were also members of the Noblesville 4x800 relay team that took first place in a season best time of 9:28.85, a time that is also good enough for 3rd best in the state thus far for one of the most talented groups of distance runners in Indiana.

"When I got the baton handed off to me (for the anchor leg) we already had a pretty big lead, so I just told myself to keep the gap we had and tried my hardest to widen it," said Rempe who split a 2:18 on her leg of the winning relay.

When asked about the strength and talent of the Millers distance squad, Rempe says, "Coach Becker gives us workouts to help us get better and everyone shows up everyday to get better, most of us have ran together for a really long time and I think that really helps us to push each other and want to get better everyday."

The distance team is not the only strength of this Noblesville girls Track and Field team as they showed on their way to winning the Conference championship.

Kiana Siefert aided Noblesville's championship run by placing high in both hurdle events and scoring in the long jump. Her point-filled evening included winning the 100 meter hurdles in a time of 15.10.

Another big scorer for the Millers was sophomore thrower Hannah Alexander winning the discus with a throw of 139'9", and placing second in the shot put with a distance of 38'10".

An excellent conference meet to say the least for Noblesville, but the Millers aren't done showing the state how good they can be when tournament time comes around. "Winning conference is amazing, but our mindset that we need to keep pushing isn't going to change," says one Noblesville athlete.

Noblesville, ranked 4th in the coaches poll going into HCC, just defeated two other Top-5 teams in Zionsville (2) and Hamilton Southeastern (3). They know they have a chance to make some noise in the tournament, but also know they will have to earn every bit of what comes in the postseason. "We're going into the tournament knowing we have to earn a spot...it is not going to be handed to us," said Rempe on the possibility of the Miller's team chances in the IHSAA tournament.

The HCC championships come at a great time in the season for these competitive teams. The last two weeks of the regular season are sure to be exciting and with the start of the IHSAA tournament and the sectional round now less than two weeks away, we will be sure to see some great performances ahead of the postseason.

Final team scores and all event winners for the HCC girls championships are listed below.

The HCC boys teams will take their turn for the conference titles Thursday evening at Fishers High School.