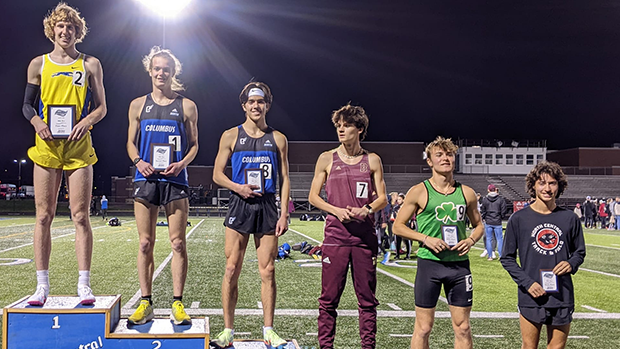 A night that started with 22 mile per hour winds and rain showers lasting for around 30 minutes ended with "Flashes" of brilliance from two of Indiana's best at the Franklin Central showcase. Huntington North's Addy Wiley and Kole Mathison of Carmel took home the Flashes Showcase Miracle Mile titles in the girls and boys races respectively. Though they both stood atop the Flashes podium at the end of the night, their paths to victory were very different but equally as impressive.

Out of 1,609 meters in the contested full mile race, Wiley led for approximately all 1,609 of those meters. She quickly raced to the front to set the pace and coming through 400 meters had a single challenger a couple meters behind her.

By the time she came back around to the start line for the halfway point the lead was increased to a sizeable gap that wouldn't be relinquished. When she reached the 1,200 meter mark she was the lone racer on the home straightaway with almost a full 100 meter lead. The race was all Wiley's the only question that remained was how fast will her time be?

Turns out, fast enough to break Zoe Duffus' one year old meet record of 4:45.95, a race where Wiley placed second. When Wiley came across the line in a new Flashes Showcase meet record of 4:42.67 there was once again no other competitor even on the homestretch.

A 17 second gap separated Wiley and second place finisher Karina James of Lowell who was in a battle of her own for that runner-up position. James, Kaylie Politza of Valparaiso, and Jaydon Cirincione of Floyd Central all finished within 0.7 seconds of each other placing 2nd, 3rd, and 4th respectively all with times right around the five-minute mark. Addison Knoblauch of Homestead rounded out the top 5 with a time of 5:02.53 for the full mile.

A dominating performance by Wiley and an extremely competitive race for 2nd set the tone for the fastest heats and set up what was to be an exciting finish in the final race of the night.

The fast heat of the boys mile was a perfect night cap that showcased dramatics almost the entire way through. Just like the girls race, Reese Kilbarger-Stumpff of Columbus North seized to the front and led for virtually the entire first 400 meters. Unlike the girls race, our boys race leader had some early challengers.

Kole Mathison, right on Kilbarger-Stumpff's tail for the first lap, took the lead just before starting lap two and held that lead for about the next 400 meters. Kilbarger-Stumpff proceded to take the lead back and really took charge of the race. With 400 meters to go and Kilbarger-Stumpff holding his lead, a new challenger was approaching and it was none other than his Bulldog teammate Matthew Newell.

The two were seizing to finish 1-2 in an amazing effort, but Mathison never gave up. He remained calm and slowly closed the gap between him and the top 2 until the final stretch where he overtook Newell for 2nd. Then in the last 10 meters of the race Mathison made a final push with an extraordinary kick to overtake 1st place and win the Flashes Showcase Miracle Mile title.

Sam Quagliaroli of Fishers proved once again he is the best of this current Freshman class taking first place in the fastest freshman heat in a time of 4:37.59. He was closely followed by Franklin Central's own Emilio Leal in a time of 4:39.03.

As described by one of the coaches at the meet "The conditions during the 4x800 were the worst I've ever seen during a track race in my life." The winning times for these relays showed that to be true as Chesterton girls took first in a time of 9:51.00, and the Carmel boys won with a time of 8:36.29.

Other section winners on the evening for the girls heats were Olivia Cebalo winning heat one in 5:25.28, Savanna Liddle winning heat two in 5:15.63, and Bella Hodges winning heat three in 5:12.33.

One of the best nights in the Indiana Track and Field season lived up to the forever hype and excitement. The rain and winds couldn't stop the best athletes in Indiana from competing at their best. And even though thunder was never heard throughout the meet we still saw plenty "Flashes" of brilliance on this Friday Night at Franklin Central.