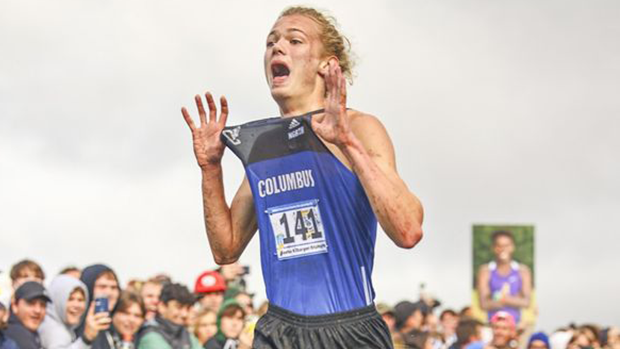 Indiana's cross country scene this fall was very packed with top-level talent. A total of six athletes broke 15:00 this season. One athlete was undefeated coming into the IHSAA State Finals. Only one athlete could take home the title of Indiana Cross Country State Champion, though, and Reese Kilbarger-Stumpff of Columbus was that individual.

While an argument could definitely be made for the outstanding seasons that Izaiah Steury (Angola) and Kole Mathison (Carmel) produced, when the most important race of the season ended Kilbarger-Stumpff was the first across the finish line.

Kilbarger-Stumpff capped off a great season winning in Terre Haute- a season that included victories at the Rick Weinheimer Classic and the IHSAA Columbus North Regional and Brown County Semi-State. He did not finish further back than third in any invitational this season to go along with his four victories. 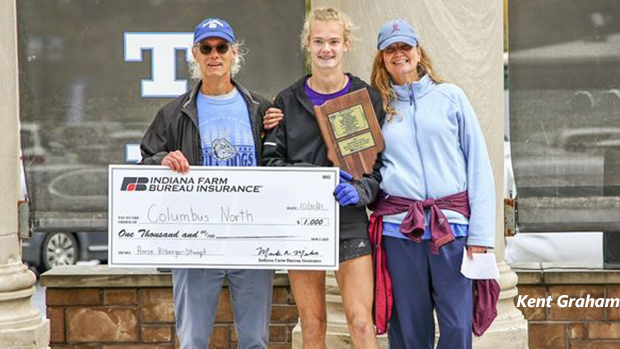 Kilbarger-Stumpff pictured above with his parents accepting the IHSAA Mental Attitude Award for 2021.

Kilbarger-Stumpff was also the recipient of the prestigious IHSAA Mental Attitude Award given to one male and one female runner who best represents the IHSAA's ideals of leadership, scholarship, mental attitude, and athletic ability.

According to Columbus North Head Coach Danny Fisher, "Reese is a special kind of kid. His season has been nothing short of remarkable."

Team plays a special role in the program and Coach Fisher added, "I'm glad he was able to share it with his teammates. He will leave the program better than he found it and I'm forever grateful for that." Reese with his teammates on the podium in 2021 following their third place finish at the 2021 IHSAA State Finals.

Kilbarger-Stumpff's season and career were historic in several ways. He is the second individual state champion in school history, sharing that honor with Christian Wagner, an Indiana high school legend.

According to Coach Fisher, "Reese will forever be a part of the fabric that makes Columbus North cross-country a special thing."

Kilbarger-Stumpff is headed to Colorado to pursue both his academic and athletic endeavors.