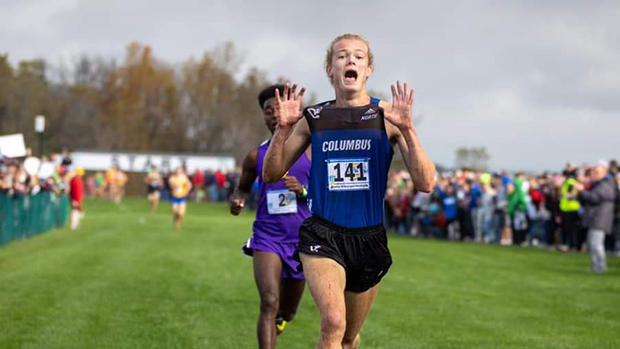 The 2021 Boys Cross Country State Finals delivered a classic finish to what has been a great year of running in Indiana, with three of the sport's best athletes coming to finish together.

Izaiah Steury, Reese Kilbarger-Stumpf, and Krishna Thirunavukkarasu came off the final turn at Lavern Gibson Cross Country Course flying in formation, with Steury on the point flanked by Thirunavukarrasu and Kilbarger-Stumpf. All three looked strong until the closing moments, when Thirunakarrasu's form began to fade leaving just Steury and Kilbarger-Stumpf to race for the win.

Kilbarger-Stumpf was able to pull just far enough ahead of Steury to sneak past the reigning state champion and take away his lane in the closing moments. The Columbus North Senior crossed the line in 15:22 to become the 2021 IHSAA Boys Cross Country State Champion.

Steury controlled the pace for the better part of the race. The Angola Senior was the first to break things up when he delivered a kick in the second mile, shrinking the lead pack to eight runners. Those eight were cut down to four by the final mile, with Carmel's Kole Mathison barely hanging on Steury, Thirunavukarrasu and Kilbarger-Stumpf. Mathison would hold on to finish fourth, but was not a contender for the win in the late stages of the race.

Led by Thirunavukarrasu, Brebeuf Jesuit took a somewhat surprising win in the team race. The Braves had five runners in the top twenty-five scoring places, with Collin Stevens, Matteo Rosio, Ezra Burrell and Todd Cameron all finishing between 16:10 and 16:21.

Hamilton Southeastern had a strong run to finish second with three runners in the top fifteen scoring places. Reigning champions and pre-race favorites Columbus North could not quite match the top two teams, coming in third to make the podium. Fishers and Carmel rounded out the top five teams.