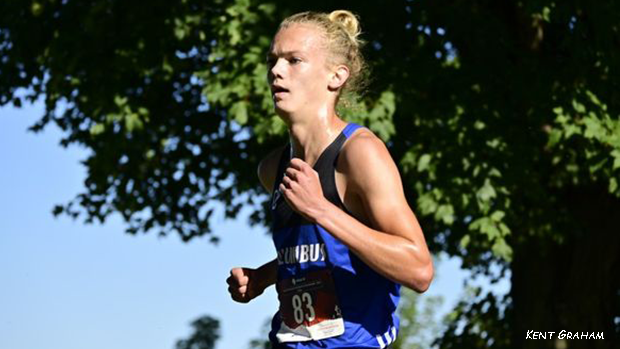 Both the Columbus North Bull Dogs boys' and Carmel Greyhound girls' cross country teams return several key runners this fall as they work toward another successful season. It's hard to call a high school team a defending State Champion in because the teams often have turnover with graduation and move-in/outs, but both of these two should have depth and returning experience to put themselves in a position to repeat last year's success this October.

Coach Danny Fisher's Bull Dogs return four of the seven who dominated the IHSAA State Finals, winning by 49 points over runner-up Carmel. Even with the loss of two All-State runners, North returns Reese Kilbarger-Stumpf who was 4th overall last year and Matthew Newell who also garnered All-State recognition with his 23rd place. Kilbarger-Stumpf added a tremendous track season to his resume where he ran 4:07 for the 1600m and finished as the runner-up in the 1600m this spring at the IHSAA State Championships. Newell also had a strong season until illness cut his season a little short. These two runners could give the Bull Dogs the best 1-2 punch in Indiana and start the team off with less than 10 team points through two runners.

The Bull Dogs also return Evan Carr and Will Kiel from last year's varsity team. Both of these runners had strong track seasons and could be candidates for an All-State position by late October. Carr ran consistently under 9:45 and 4:35 while Kiel was in the low 10:00's for 3200m. If these two runners continue to develop in a similar fashion this season, this could give Coach Fisher's squad the depth needed to compete very similarly to the 2020 team.

The summer has been good for CN thus far, according to Coach Fisher. "The guys have had a good summer, a healthy summer, and are excited to see how that consistency of training translates to 5 kilometers on the grass. They are just now starting to get into more specific work that simulates the demands of a 5k cross-country race. This summer they've really had a steady dose of long runs, hills and fartleks until the weather breaks."

The Bull Dogs will need to develop some new scorers this fall to replace their seniors but that is very doable with the depth they showed this past spring. The track season was filled with depth in the 1600m and 3200m events.  They also have one of the state's best middle school runners, Aidan Jeffares, joining the group this year which could be someone that helps as the season progresses. Jeffares was the 2020 state middle school champion this past fall.

Coach Fisher seems to have a plethora of runners in the stable. "Our 4 returning seniors up front have, and will continue, to guide the boat. Reese Kilbarger-Stumpff and Matt Newell have a special, unique opportunity, in that they get to train together each day and they will lead us up front after they both have had a great summer of training. Evan Carr will continue to be our vocal leader in both preparation and performance. Will Kiel will most likely round out of top 4 but has the very important job of setting the example for our very talented junior group. Our junior group made up of Sam Hobbeheydar, Jacob Strietelmeier, Kellen Hottell, Mateo Mendez, William Russell and Clayton Guthrie will be competing with each other to round out our top 5-10." Carmel will be led by a new coach this season as Taylor Marshall, formerly the head coach at North Central High School, will take over the reins after the retirement of Coach Andy Dalton. Coach Marshall will inherit a strong squad that ran well this spring during their track season, winning the 3200m Relay at the IHSAA State Finals. Similarly to the CN team, the Greyhounds lost three runners to graduation but have a strong nucleus of returners to make them a favorite to compete for the top spot on the podium.

According to Coach Marshall, "This summer has been off to a great start. It's been exciting to get to know so many hardworking, dedicated girls. The girls are in a great position to build off the success they had last Spring and Fall."

Annie Christie's graduation does take away an elite talent from the roster but that does not mean the cupboard is bare for Coach Marshall. Cara Naas had a terrific track season as a freshman and could be a top All-State candidate. In addition, the trio of Alivia Romaniuk, Jasmine Klopstad, and Jamie Klavon add huge state meet experience and are all either All-State performers or have the credentials to reach that level this season.

This group should lead the way. Coach Marshall added, "It's a big advantage to have so many girls pushing each other to be the best they can be at practice. The 'Hounds are led by a group of girls who have established themselves near the top of the state- Jasmine Klopstad, Alivia Romaniuk, Cara Naas, and Jamie Klavon" are leading practice at this point.

Depth is always an issue when competing for a state championship and that is the only potential question mark for Carmel. They did have other athletes compete well in the state tournament last year and the track season did reveal a few strong performances aside from the returning girls listed above. Marshall has observed that "some exciting underclassmen are ready for a breakout year- Kara Wenzler, Olivia Mundt, and Charlotte Konow" are some of the younger girls he sees making a contribution this season. This is coupled with the outstanding middle and elementary school programs in the Carmel district that can produce immediate impact athletes, especially on the girls team historically.

It is hard to imagine the 2021 XC season unfolding without both the Bull Dogs and Greyhounds being huge factors at the every meet they compete in and making it hard to dethrone them as champions.  Both teams are well-coached and have a huge pedigree of success that cannot be overlooked.  It's hard to predict the sport of cross country- but you get the sense that both of these teams should be some of the last ones standing on the podium this year.