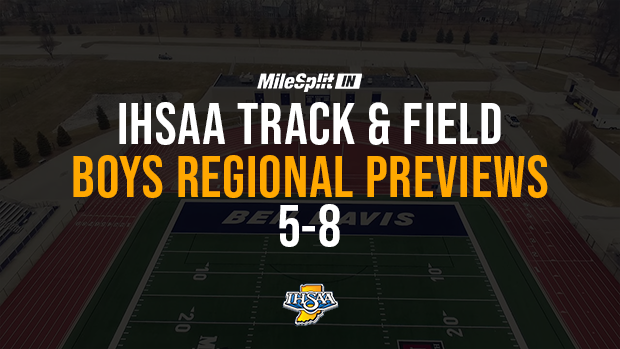 Boys Regionals is set for tonight across the state!

View meet previews for five through eight down below!

Boys Regional #5 at Lawrence Central will feature one of the best jumpers in the country. Kamyren Garrett cleared 7-3 at the Lawrence Central Invitational earlier this season, which ties him with Kansas' Tyus Wilson for the best in the nation this year. The Senior won comfortably sectional titles in both high jump and long jump, and will look to do the same at this regional. Garrett will continue his career at Kansas State University next season.

Another athlete to watch at this meet will be hurdler Paul Goins. Goins won the 300-meter hurdles and the 110-meter hurdles last week, and his season best time of 14.05 in the 110 is number one in Indiana this year.

One of the best races of the evening will be the 4x100-meter relay. Pike, Decatur Central, Park Tudor, and Lawrence Central all ran times between 43.30 and 43.34 at their sectionals last Thursday. That's four teams blanketed by four hundredths of a second.

Regional action from Lawrence Central will begin at 5:30 Eastern Time.

The only team that could challenge Center Grove for the regional championship is Warren Central, and their best chance to steal some points will be in the 4x100. Warren Central won their sectional in 42.47, just a tick slower than Center Grove's sectional winning time of 42.37.

Tucker Smith from Columbus North is easily number one in the state when it comes to the shot put, and he continues to prove just how good he is. Smith threw 68-05.5 last week, nearly ten feet further than anyone else in the state.

Bloomington North hosts Boys Regional #7, and the Cougars are heavy favorites to take the regional championship. Bloomington North has won this meet 13 times before, and they won their sectional last week by more than 50 points.

One of Bloomington North's best athletes is Mason Childers, who will be running in an extremely competitive 800-meter run. Childers won his sectional last week with a time of 1:56.96, just a bit faster than Terre Haute South's Cael Light's sectional winning time of 1:57.13. Two more athletes, Anthony Adams and Bruce Griffin, also ran under 1:58 last Thursday.

This meet will feature great racing throughout the night, the best of which may come in the 4x100-meter relay. Sullivan ran a 44.04 to win their sectional, beating Terre Haute South by 0.01 seconds. Jeffersonville ran a very similar time to win Sectional 26 in 44.09 seconds.

The Bloomington North Regional will get started at 6:00 Eastern Time.

Camden Marshall headlines Regional #8 at Evansville Central. The Corydon Central Senior owns the state's third fastest 1600-meter run time this season at 4:19.13, and he took home sectional titles in both the 1600 and the 3200-meter run last week.

One of Floyd Central's top athletes is distance runner WIll Conway. Conway finished second to Camden Marshall in the 1600 and the 3200 last week, and you can expect to see him at the front of those races again this week. Floyd Central will also be counting on thrower Isaac Hatfield, who won both throwing events last Thursday.

New Albany brings two athletes to this meet that rank in the top five in their events statewide. Asius Miles' time of 49.54 in the 400-meter dash is fifth best in Indiana, and long jumper Ja'raylan Johnson ranks fourth in the state with a season best of 23-0.5.

Floyd Central and New Albany finished 1-2 in all three of the relays last week, separated by about one second in each. Those events were critical to determining the sectional champion, and will be just as important this Thursday at the regional championships.