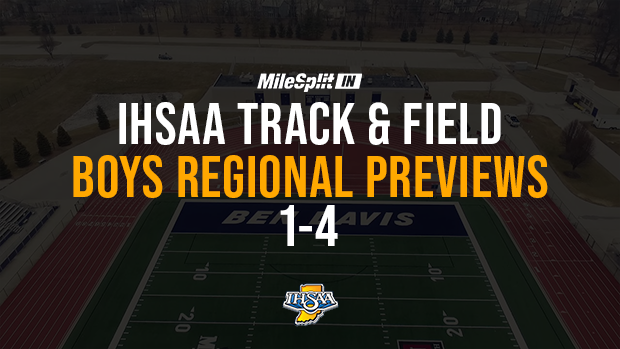 Boys Regionals is set for tomorrow tonight across the state!

View meet previews for one through four down below!

Boys Regional #1 at Crown Point features four runners that ran under 11 seconds in the 100-meter dash at sectionals last week. The leader of that group is Michigan City's Esau Haynes. Haynes put the state on notice with a sectional-winning time of 10.68, the fastest 100 in Indiana this year.

Highland's Lucas Guerra is another state title contender in this regional field. The Senior distance runner finished runner-up at the cross country state finals in the fall, and he cruised to three sectional wins last week. Guerra won the Flashes Miracle Mile against some of the state's best runners earlier this year, and his season best time of 8:58.75 in the 3200-meter run ranks fourth in Indiana.

Hobart High School brings two of Indiana's top three pole vaulters to this meet. Riley Johnston and Cody Johnston cleared 15-8 and 15-4, respectively at the Crown Point sectional. Riley's season best mark of 16-0 is tied with Will Staggs for the best in Indiana.

Merrillville brings the most complete team to this regional, and they are heavy favorites to take their third team title at the end of the night.

The Crown Point regional will get started at 5:00 Central Time.

Penn will have a number of athletes finishing at or near the top of their events throughout the evening. Discus thrower Mike Paquette, sprinter Josiah Williams, and distance runner Mariano Retzloff all became sectional champions last Thursday.

One of the best races of the evening will be the 400-meter dash. Pioneer's Ezra Lewellen, Mishawaka's Troy Crooks, and Elkhart Central's Jacob Holt all won their sectional championships with times between 49.79 and 49.96.

Another great race Thursday night will be the 4x800-meter relay. South Bend Adams narrowly defeated Penn at their sectional last week, and those two schools should have another great race at the regional level.

Regional action from Kokomo will begin at 6:00 Eastern Time.

The Carmel Greyhounds rank third in all-time regional championships with 19, and they look prepared to take their 20th at Regional #3 hosted by Lafayette Jefferson. Carmel's greatest strength is their relay teams, all of which boast season best times that rank in Indiana's top three.

The most impressive Greyhound individual may be distance runner Kole Mathison. Mathison's best time of 8:55.12 earlier this year is second best in Indiana, and the sophomore came home third in the cross country state finals last fall.

Three of the top four 400-meter dash runners in the state will be competing in this regional. Fishers' Keefer Soehngen leads the way with a 48.70 earlier this year, with Carmel's Owen Schafer and Plainfield's Nayyir Newash-Campbell close behind.

Carmel's Zachary Cox and Brownsburg's John Colquitt will put on a great show in the 300-meter hurdles. Cox and Colquitt set the state's fastest two times in that event in their sectionals last week, with Colquitt running a 38.41 and Cox just a bit quicker at 38.23.

Zionsville brings a pair of elite throwers to this regional. Bennett Decoursey and Joe Tanona went 1-2 in discus at their sectional last week, with Decoursey throwing an Indiana's number two mark of 182-11. Tanona also won the shot put with a top ten heave of 56-0.

Regional 3 from Lafayette Jefferson will begin at 6:00 Eastern Time.

Angola won their first ever sectional championship last Thursday, and they come in as the favorite to win their first ever regional this week at Marion. The Hornets are led by the reigning cross country state champion, Izaiah Steury. Steury did it all at the East Noble sectional last week, winning in the 800-meter run, the 1600-meter run, and the 3200-meter run. Steury was also part of the winning 4x400-meter relay team from Angola, which narrowly defeated East Noble to secure the team title.

Angola also brings one of the best throwers to this meet. Tim Macomber will compete with Bellmont's Mason Murphy for the win in both shot put and discus. Macomber and Murphy both threw just over 160 feet in the discus at their sectionals, while Murphy was just a couple of feet better than Macomber in the shot put with a 56-04.

A team that could challenge Angola for the regional title is Fort Wayne Carroll. The Chargers dominated their sectional last week, and should see several athletes earning points at this regional. Carrol's top runner is Preston Sloffer, whose sectional winning 1600-meter run time of 4:27.71 is only half a second slower than the time Steury ran to win his sectional.

Leo's Luigi Rivas and Angola's Garrett Sauter should put on a great show in the hurdling events. Both ran their season best times at their sectionals last week, and both are now ranked in Indiana's top five in the 110-meter hurdles. Rivas ran the 110 in 14.32 seconds last Thursday, while Sauter was just a few ticks slower at 14.44.

Regional #4 from Marion will begin at 6:00 Eastern Time.