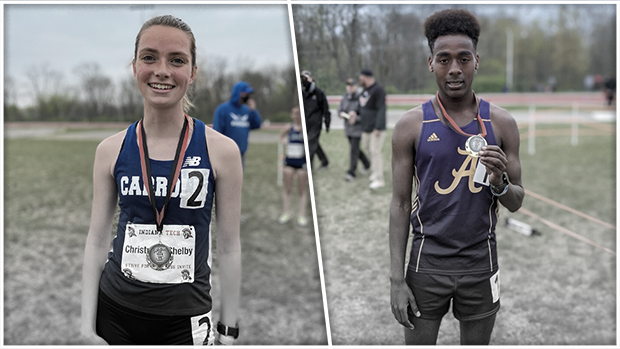 The Indiana Tech High School Invite took place Saturday and had plenty of fast times across the board. From hurdles to distance, the day was packed with action!

Down below are 5 notable performers!

Christman entered the Indiana Tech High School Invitational with a PB 11:15.61 for 3200. Against a solid field, Christman took the lead early with teammate Ashlyn Minton and never looked back. Christman crossed the line in 11:11.38, which was a new PB. She has secured two PB's over the last week, also nabbing a new mile PB at Flashes Showcase throwing down a time of

Mckenzie has had a solid start to her outdoor season. Just last week, Mckenzie had an IN #3 performance in the long jump, putting down a mark of 18-5.  On Saturday, Mckenzie was entered into the long jump where she would jump 18-0.25, which was good for first place. Mckenzie is just a sophomore and has plenty of upside for a state title in the next few years.

Steury had a busy weekend! Friday night he would toe the line in the 3200 at the Carmel Distance Showcase. The race turned out to be a classic, where Steury would battle Mathison to the finish. Steury would edge out Mathison at the line, running a US #9. Fast forward to Saturday, Steury would tighten up the laces to run the 1600. He would cruise to a 1st place finish, running a 4:22.

Stiver is someone that has been on our radar as of late. He's entering his senior year at Warsaw and has the potential to make some noise this season. He made his first outdoor appearance Saturday where he would compete in the 800. He would clock a 1:57.88 which is an IN #2 this year.

Saturday treated Cox well. He headed into the meet entered in the 110mH and the 300mH. In the 110mH, he was edged by Angolas Garret Sauter at the line. Cox would finish 2nd with a time of 14.59, just behind Sauter's mark of 14.58. Cox would get his revenge in the 300mH where he took the dub with a time of 38.38. Cox is a state title contender and will be someone to watch closely as the season progresses!