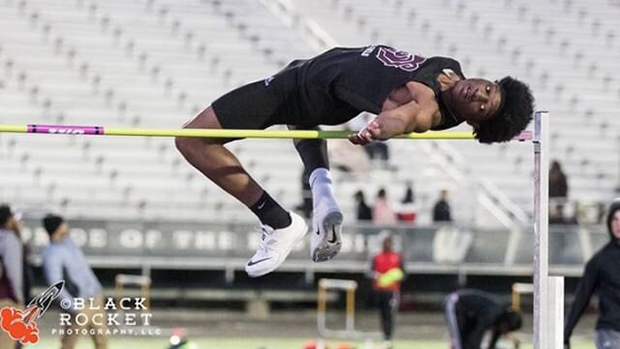 High jumper Kamyren Garrett had his goals reaching the highest heights when the 2020 track season began. With the cancellation of spring sports, the Lawrence Central junior is now focusing his sights on the 2021 season.

"My hopes for next season, I want to break both the indoor and outdoor records in the high jump."

With a successful start to the indoor season, Garrett was projected to break some records. He jumped 7-0.5 at the Greyhound Classic in February. That jump earned him a first place ranking, not just in the state, but in the nation. The HSR Finals high jump record is 7-0, so the junior was on his way to make his goal a reality. His short but impressive indoor season earned him the honor of being the USATF Indiana Athlete of the Month for March this year.

During the 2019 indoor season, Garrett earned a 2nd place finish at the HSR 4A-6A finals with a jump of 6-8 but had a qualifying jump of 6-9. With last year's first place finisher graduated, and Garrett's ranking of number one in the nation, he was projected to have easily gotten first place.

His indoor PR from this season has moved him into No.4 all-time indoors and No.19 all-time for both indoor and outdoor marks.  With a jump over 7-0 in his first meet of the season, Garrett was well on his way to potentially getting a record breaking first place finish at the outdoor state finals. It would have taken some more work throughout the season, but he looked to be a shoe in the at least get near Nate Patterson's 7-4 record set back in 2018.

Last season, he finished 4th behind three seniors with a jump of 6-8. His state qualifying jump was made at 6-10, the highest jump cleared during the 2019 season.

The incoming senior has worked hard to achieve a 7 foot jump since his career began. Before placing in the top 5 during both state finals his sophomore year, he only made it to regionals his freshman year clearing 6-2.

COVID-19 may have altered training methods, but Garrett is preparing to come back stronger than ever in 2021. He can be found training in his driveway or at a local park doing both plyometrics and cardio workouts.

As we await to see what's in store for next track season, Garrett is confident he will reach new heights.