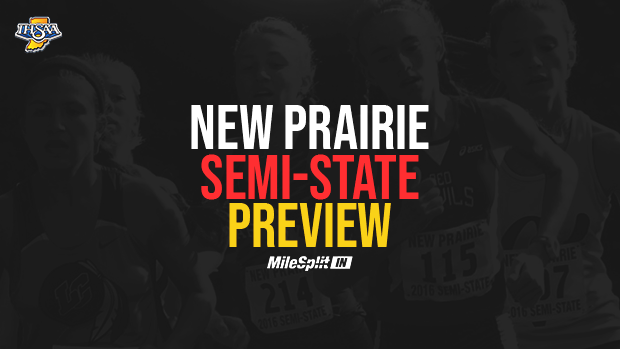 On the boys side there are 7 teams ranked in this weeks Coaches Association Poll. These 7 teams are very close both in the rankings and in their scoring members averages.  However one of these teams along with 13 other teams will meet the end of their season this Saturday at the New Prairie Semi-State.  In a virtual meet the 2nd through 6th place qualifiers were only separated by 18 points. Find out who we think will punch their tickets to state this Saturday morning below.

Who We Think Will Advance:

Borderline Teams: Chesterton did win the New Prairie Regional last week but Valparaiso was not racing their top runners.  This team hasn't really shown much with their times this season and will likely not have a runner that scores low which is why we think they finish 7th and don't advance.  LaPorte does not have a strong enough #4 or #5 to make it out even though they have Mitchell Gits who is close to breaking 16 this year.  New Prairie has Jacob Corbett who ran a 16:21 but their #5 guy is very far back which will hurt.  Lake Central has the same problem with their #5 who is even further back even though they have 2 runners that will probably advance as individuals to state.

Crown Point is lucky to have an extremely low stick on their team as Geno Christofanelli has one of the best times in the field coming into the New Prairie Semi-State.  His teammate Quinton Bock has also flashed some talent early in his high school career with a low 16 minute 5K. Drew Holok has also been sub 17 but that is where Crown Point will struggle as a team.  They barely have 3 under the 17 minute mark which could cause some trouble. The bulldogs have proved they have it in them to advance as they narrowly defeated Highland last week. With Geno most likely scoring low this team should be able to make it out.

Even with the soccer controversy going around with Harrison they still look like they have a strong chance at making the state finals.  Caleb Williams and William White lead the charge with low 16 minute times. Caleb Beimfohr should also sneak into the top 20 scoring positions to help out the raiders.  The #4 and #5 guys will need to step it up if they want to place higher as a team but Harrison should comfortably make it to state

Valparaiso looked very strong at the very beginning of the season but it seems like other teams have caught up in strength.  The Vikings took home runner-up as a team last week in the New Prairie Regional while resting some of their top runners. The duo of Jack Acton and Nathaniel Smith should place fairly low for the Vikings with their remaining runners a couple of seconds behind.  Their usual top 5 has a solid season average which is identical to that of West Lafayette. This state caliber team looks like they are ready to go this week and should be in the mix for an advancing spot.

West Lafayette barely edged Harrison last week at the Regionals with a narrow score of 37-39.  The Red Devils don't have an elite front runner this year but they do have depth as they have 7 runners that have gone under 17 minutes.  Harry Shook, Mitchell Curl, Alec Meister, Carter Delworth, and Tyler Milam all bring in a solid team average and spread to help out the teams chances of advancing to consecutive state meet.  This team has the potential to score well in this larger more tightly contested meet.

Highland did not show the best performance at Regionals as they were barely beat by Crown Point but if their tightly packed 2-5 show out this weekend Highland could be a challenging team to defeat.  The Trojans will most likely have a low stick with Lucas Guerra as he has dipped under 16 minutes this season with a 15:58. Mateo Garcia, Vinnie Bovino, Ben Salinas, and Eric Alegre round out the scoring five with mid 16:40s for their time averages.  In a larger field that pack of runners should prove lethal and possibly good enough to finish as high as 2nd place.

Lowell rested a good portion of their top runners at the Crown Point Regionals and still finished 3rd.  Their top runner, Gabriel Sanchez, has the second best time in the semi-state field this season with a 15:34 and fresh off a Regional win last week.  Dustin Hudak, Alexander Huseman, and Jacob Durr all hypothetically would score less than 25 points in a virtual meet and should all be under 16:30. Lowell's biggest weakness will come in their fifth man.  Lowell has not had 5 guys break 17 minutes yet this season. A big race from a #5 guy could be enough to solidify a 3rd straight semi-state championship for the Red Devils.

On the girls side there are 5 teams ranked in this weeks Coaches Association Poll.  These teams are obviously favorites to advance but who will beat who and what will the final team advancers be?  Find out who we think is advancing to state both individually and team wise for this weekend's action at New Prairie.

Who We Think Will Advance:

Borderline Teams: Wheeler has a solid squad and could be one of the teams to take over Munster if they fail to perform well.  Hailey Orosz is flirting with the 19 minute mark and could bust out a great performance which would help Wheeler greatly.  Twin Lakes is in a similar situation as they have the best athlete in the field based solely on season bests with Maggie Gutwein's 18:21.  This team lakes depth however which will be their downfall. Crown Point, despite being ranked and having a solid 1-2 punch with Jaelyn Burgos and Maddie Russin, falls due to their #3 through #7 runners being pretty far back.   Hobart has a decent #1-#3 but faces a similar problem to that of other teams not projected to making it out: lack of depth.

After a 5th place scare at the New Prairie Regional Munster will look to bounce back at Semi-State.  Munster has a solid top trio of runners with a sub 19 minute performance this year from Maria Blaesing and sub 20 minute races from Hannah Robbins, and Brisa Bohling.  Their #4 and #5 are questionable for this team and will be essential on whether or not the Mustangs advance. With Munster being the last team in the New Prairie Semi-State, we are picking them to advance.

The Warsaw girls blew away the competition at the Culver Academies Regional.  They could have doubled their score and still would have won by 13 points. Adree Beckham leads the charge with a 19:05 and ran with her teammate Wini Barnett last weekend at Regionals.  The tigers will be fighting for a chance to run state this year after an unfortunate 9th place finish last year. As long as they hold off Munster and chase down the teams ahead of them Warsaw has a good shot at making state.

In a close loss to Chesterton, the Vikings will look to seek revenge.  Ava Gilliana has established herself as the teams lead runner with a sub 19 performance and will try to seek a top 10 finis.  The race for 2nd through 4th should be extremely tight though Valparaiso's downfall will come from their lack of runners in the top 20.  This might be enough to cause the Vikings a few position spots to 4th as a team.

Lowell dominated the Crown Point Regional and are strong contenders for the race for the 2nd place team in the girls race.  The Red Devils will likely try to hold off Valparaiso while also chasing down Chesterton. Lowell could be helped tremendously by potential top 5 runners, Karina James and Jordyn Boyer who both are in the 18:30 to 18:40 range.  Annalise James could also secure a top 20 finish which would help make up for the #4 and #5 runners that lag behind for Lowell. Lowell is in good position to make things happen, it is going to come down to how they perform race day

Chesterton is coming off of a solid New Prairie Regional title after defeating the Valparaiso Vikings by a score of 36-43 last week.  Chesterton is led by front runner Shelby Bullock who has a season best time of 18:40. Bailey Ranta will not be far behind for the Trojans as she is knocking on the door of a sub 19 minute performance.  If Chesterton runs like they have so far this season they have a shot at a runner-up position for this semi-state and maybe a very small chance of a title depending on how many runners West Lafayette chooses to rest.

West Lafayette is one of the premier teams in the state for the girls this year.  They boast a mean 18:49 average which is over half a minute faster than the next best team in the New Prairie Semi-State.  They also have the lowest spread and could very easily place their top 3 of Ellie Tate, Emma Tate, and Mary Schultz in the top 5.  Their scoring 5 should all be in the top 20 if they elect to run everyone. The Red Devils may run some of their slower runners and rest some of their stars to focus on state next week.  West Lafayette dominates the field and the meet is theirs to lose.