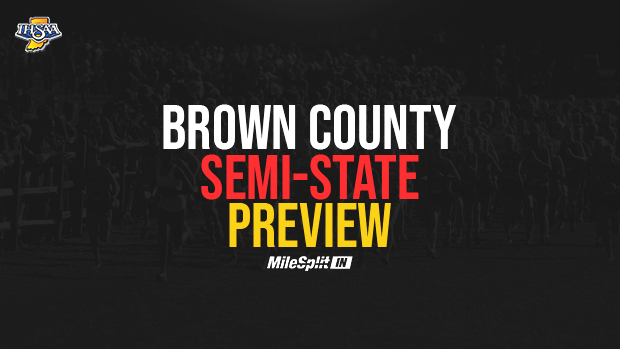 The Panthers have been contending for the state championship all year and have shown flashes throughout the season that they have the squad to get it done. Having said that, they've already lost to their in city rival Bloomington North this postseason. That loss was avenged last week at Regionals, so another statement win here will put this team back on track for their goal at Terre Haute next week.  Ian Shaw had a big performance last week, and will need to keep those coming for this team to have a shot to win. Jack Gillard is the X-factor for this team and they're very tough to beat when he's at his best. Look for the Panthers to win this Saturday at Brown County.

This Columbus North team has a good mix of upperclassmen and underclassmen in their top 7 with 3 seniors in their top 5 and a freshman and a sophomore.  John Sluys has emerged as a solid #1 guy as he won the Brown County Regional last week and has been solid all year. If their young guys can just stay calm and collected under the pressure of the next two weeks, Columbus North will surprise some people with a couple of big performances and upsets.  I like this team to take 2nd here at Semi-State and advance with ease.

Bloomington North has one of the best duos in the state with the rising Paul Rushton and Isaiah Hollars.  It's always nice to have two possible All-State guys on the line for your team, but those two can not score by themselves.  Chris Herrera is a solid #3 guy, but their 4-5 guys have to step up for this team to ever have a shot of making the podium, or let alone beating Bloomington South or Columbus North.  This team has the guys up front to lead them to success, but the rest of their top 7 has to step up.

Junior Carter Leak and the rest of this team are looking to make some noise in the Semi-State mix, but to do so they're going to need a big race from their #2 guy Alex Hendrix.  He's always shown flashes of potential, and can find a way to aid Carter in the scoring. Although, if they can't get more from their 3-7, I don't see the ceiling for this team being very high for this team.  I see this team advancing to State, but we'll wait to see what this team can accomplish at LaVern Gibson.

This team does not have a clear #1, but they have a nice split between their 1-5 being only 28 seconds.  The only problem is that their times are between 16:34-16:52. This Brown County course is fast, so if this Floyd Central team can find some confidence and peak at the right time, I wouldn't count out this squad to make some noise here in the Semi-State rankings.  For now, I see them earning a qualifying spot for State with some room to spare.

Lead by All-Stater Nate Kaiser, I think this team will find a way to qualify for state with the last spot remaining.  Kaiser will score low points, and Kaden Chestnut will need to step up as well to aid the void of a weak 5th man. A big PR from their #5 is all this team needs, but they have little room for error as they don't have much depth.

This one is going to be good.  For the individual title, it will be between Caleb Futter, Ian Shaw, Austin Haskett, and Nate Kaiser.  Futter had an amazing performance last year, and I see lightning striking twice with a sub 15 performance.  Shaw and Haskett won't be too far behind, but don't count out Kaiser as well as he's capable of a big race as well.  Expect all four to be sub 15:30 with some room to spare.

In a close battle between Floyd and North, I'm going to go with Floyd Central to take the Semi-State championship.  Sydney Little could earn low points for Floyd with a runner-up finish which would give them the edge. If their pack of their 2-4 can all improve, this team could turn some heads at state.

This is going to be a tight race for 1st.  Although their #2 is ahead of that Floyd pack they're going to need some help from their 3-5. Their team is in the same situation as the boys: a great 1-2 punch with too big of a gap behind them.  If they can all move up, expect this Bloomington North team to knock off Floyd Central

The Bulldogs have a good front runner in Olivia Morlock, and the rest of their team needs to reduce the 1 minute, 10 second split between them.  They'll be in a close race with South for third place, and right now I'd give them the edge. Although, it will be within 10 points so there's no room for error.  As for their state chances, they should be in pretty comfortably even with one of their main girls having an off day.

Lead by freshman Abby Beathea, this team is nearly identical to the Columbus North team.  They both have similar front runners as well as a 19:30's 5k average. The reason why they aren't third on my list is the 20 second slower 1-5 split for their top girls.  If they can reduce that gap, Bloomington South can take a third place finish with their ticket to State as well.

Forest Park will be in a fight with Edgewood and Memorial for the final two spots for state.  Park's advantage will be having two solid girls rather than just one. Claire Mehling and Ellie Hall are both projected in the top 15 and will reduce their score tremendously.  Their 3-5 are back in the 60's, so they need big performances to advance from Mehling and Hall. I see this team making state as I believe the two will do their jobs and punch their tickets.

Again, the team with two good front runners will advance.  Clare Vogel is a top 10 girl in the state of Indiana and will be going for the individual title this weekend.  This team will need the lowest scores possible from her and her teammate Allison Morphew. With those two on, I'm giving them the edge over Edgewood.

Annalyssa Crain is the heavy favorite to win as she is the third best runner in the state.  She's had an amazing season so far and nothing should change this week. Sydney Little and Clare Vogel will be in a tight battle for 2nd that could go either way. Both are looking for All-State finishes as well and will get the chance to prove their worth against each other.