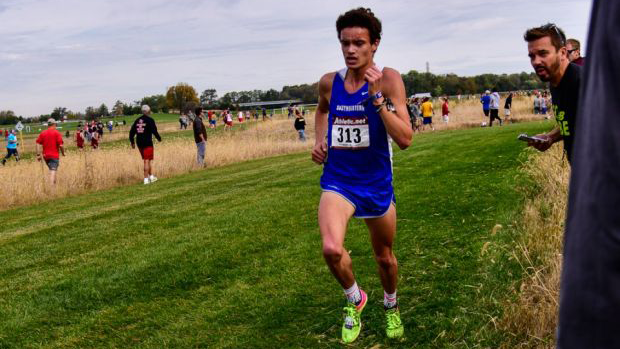 Let's get this out of the way right off the bat, Gabe Fendel is going to win this race. He is the class of the field, and one of the best runners in the nation. There is no point in trying to ignore that. He is a 4:04 1600m runner, 8:50 3200m, and has run 15:05 this season in the 5k. Fendel is currently ranked 5th in the country, and has been the favorite to win the individual title all season. Make no doubt, he will win on Saturday, but nobody is going to hand him the medal. He is facing one of the deepest individual fields in recent history.
Entering into the Championship, there have been 13 athletes to break 15:20 this season in the 5k. On top of that, there have been 21 runners to break 15:30. This is the most, by a lot, in both categories in the last seven years. To put this in perceptive, the previous six year averaged 5 sub 15:20 runners and 10 sub 15:30 runners. This includes 2010, which was the last season with comparable numbers with 11 sub 15:20 runners and 20 sub 15:30 runners. We are going to break this down into several different categories.
The first category we are going to tackle are some of the top runners in recent weeks. Obviously we have Fendel, who is coming off a Semi State win with an impressive 15:08. Also coming in with Semi State wins are Alec Fleming, Caleb Futter and Matthew Yoder. They all ran excellent races this past week and are keyed in for Top 10 finishes. We will also throw in Cole Hocker into this group too. Hocker is the only athlete in this field who has taken down Fendel. Thanks to an unfortunate trip by Fendel with about 600m left, Hocker was able to capitalize to take the Regional title.
The next category are runners who are top returners from last year's race. Fendel is in this group too, as he is the top returner. Behind him is Skylar Stidam from Christian Academy who finished 3rd last year. An interesting State Meet Factoid: Fendel and Stidam have finished next to each other in the results two out of the three years they've run. Their Freshmen year, they finished 107 and 108, and their Junior year, they finished 2 and 3. Another top returner who hasn't gotten a lot of attention this year is Mitchell Rans. He finished 4th last year. While Rans finished 5th last week in the New Prairie Semi State, but can't be counted out. We can throw in Alec Flemings who was 5th last year, and Colin Murphy who was 8th last year.
There is a group of runners who are competing for team points. That is our next category, runners running for the greater good of a team score. Colin Murphy is leading Carmel in this race. Now the Greyhounds are not reliant on a low stick to win, their depth is almost unbeatable, but it never hurts to start the scoring with a single digit number. Cole Hocker will be leading the number two team Cathedral, who will be competing with Matthew Yoder of Westview for the runner up medals. Sam Kuhn of Fishers, Alec Fleming of Lowell and Ian Hunter of North Central with be trying to lead their teams to a podium finish. Caleb Futter and Skylar Stidam will also be fighting for low team points that their team relies on.
Our final category reserved for the wildcards. Leading this category are Austin Haskett and Matthew Schadler. They have been close to the top all season, and have thrown down some fast times. Both have broken 15:10, with Schadler doing it twice. Gabe Fendel is the only other Hoosier to break 15:10 twice this year. Haskett was undefeated this season until Semi State where he finished 3rd. Sam Kuhn is in this category. He finished just 3 seconds behind Hocker at Semi State. Jakob Kintzele, a runner up at New Prairie is definitely a wildcard consideration too. Ben Miller from Carmel is the ultimate wildcard. He always put things together in the State Finals. He is coming off a week of rest, and should be ready to run a great race.
The greatest opponent these athletes may face this weekend is the weather. Right now, the forecast is calling for up to a half inch of rain on the course in the 24 hours leading up to the race. While the rain should subside by 8AM, but the course will still be wet. I don't expect any flooding, but there could be some slick spots and footing concerns. Another big concern in the wind. Right now, there are some forecasts calling for wind up to 13mph during the boys race coming out of the Southwest. Why is that important? That finishing straightaway at LaVern Gibson finished from Northeast to Southwest. That means runners could very possibly be finishing into a stiff head wind. The final home stretch is already intimidating, with 400m slightly uphill. To add a wind and the pressures that a State Championship brings, runners are going to need to save some in the tank for their final kick. That being said, for someone to try and break away in the first kilometer or even in the first mile and try to solo a State Championship might prove to be an unwise choice.
This will even up the field a bit and will make for a very exciting finish. Final Predictions: Gabe Fendal wins. In no particular order these guys will be in the Top 10, Cole Hocker, Matthew Yoder, Colin Murphy, Matthew Schadler, Caleb Futter, Alec Fleming, Sam Kuhn, Skylar Stidam, and Jakob Kintzele. No matter what the final outcome is, it is sure to be an exciting race, with one of the best fields in Hoosier History.