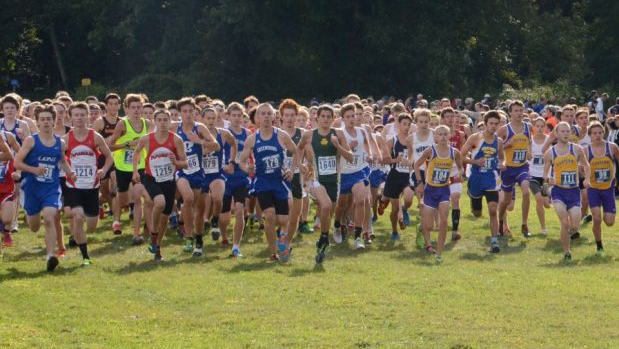 Saturday we'll have another barn burner at Eagle Park in Brown County for the 16th Annual Eagle Classic. The conditions in Nashville, Indiana will set up for some fast times on an excellent course. With those fast times will come some fiery competition, as six girls teams from this week's IATCCC Coaches Poll will be competing, including #4 Carmel, #5 Bloomington North and #8 Floyd Central. Other Top 25 teams include #13 Bloomington South, #15 Westfield and #21 Columbus North. Brown County is a flat and fast course with sweeping turns and long straightaways.
You can expect runners like Carmel Sophomore Phoebe Bates to break 18 minutes. With her pushing the pace will be her teammate Maddie Dalton, and Bloomington North's Grace Williams. Carmel's ladies comes in the favorites.
The seven time defending State Champions are in a "rebuilding" year, but are still stacked. Despite finishing third at last week's Marion Invitational, I think they have the depth to take on this field, but it won't be easy. Bloomington North is coming off a win at the Columbus North Invitational, where they beat Top 25 teams Franklin Central and Columbus North. Also thrown into the mix is Floyd Central, who dominated THSB Invitational last Saturday, winning by 55 points over four other top 25 teams. While Floyd Central has one of the best trios in the state in Sydney Liddle, Faith Barba and Kylie Sorg, they will need their four through seven runners to really step up to have a chance to win.
The boys race will have just as much talent battling out on the course, with 8 of this week's Top 25 teams racing in the Elite Race. They are #1 Carmel, #9 Bloomington South, #10 Tell City, #14 Bloomington North, #20 Jennings County, #23 Westfield, #24 Franklin Community and #25 CAI.
The Greyhounds come in as the class of the field. They are ranked #3 in the nation in our Flo50 rankings. They do have tremendous depth, and I wouldn't be surprised if they rested some of their top guys on Saturday, and still come out with a win. Second place will be a real battle as any of the other seven schools can put together some great performances to take it. I would give the advantage though to Bloomington South. They have two low stick threats in Ian Shaw and Wil Zinkan, followed by a solid three through seven to back them up.
As for the individuals, Matthew Schadler of Evansville Memorial will be running in this race as an individual and should take this race out in at a quick pace. Colin Murphy from Carmel finished behind Schadler last week at the THSB Invitational, but should be right there to challenge him this week. Like I said before, Ian Shaw will be up front to grab a low stick, while Caleb Futter from CAI, Ben Miller from Carmel, and Leo Simpson from Tell City will all be in the lead pack.
Saturday will be a great day for racing. Dry and cool, with temperatures only reaching a high of 71. I expect to see a lot of really fast times, and some great racing from some of the best Indiana has to offer. The Eagle Classic is one of the best invitationals, on one of the best courses in the State. Tune into MileSplit Indiana this weekend to find meet coverage, with race videos and interviews.