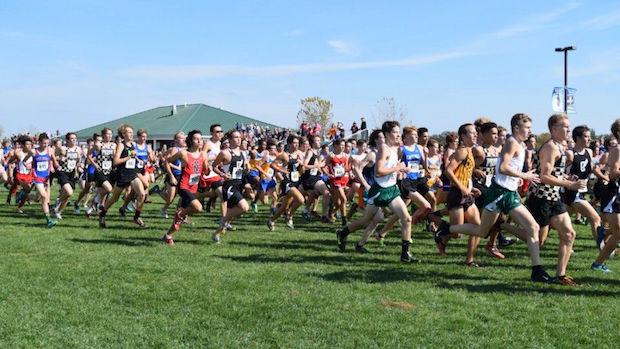 This Saturday's Terre Haute Savings Bank State Preview invitational is going to be one of the biggest meets outside of the State tournament in 2017. Saturday's race will include nine teams in this week's IATCCC Top 25 Poll, including 60% of the top ten teams. Those teams are 1 Carmel, 3 Fishers, 4 Westview, 6 Tell City, 7 Valparaiso, 9 Crown Point, 12 Zionsville, 15 Avon and 25 CAI. It looks like the remanence of Harvey will miss Terre Haute and with a Friday night low of 52 degrees, the race should have excellent conditions.

Flo50 #3 Carmel comes in as the defending champions, and they are coming off a dominant performance at the Hamilton County Championships on Tuesday. They were able to put six runners in the top ten, on their way to a 25 point win over Fishers. I would expect nothing to change since Tuesday, with Carmel running away with the title again.

As for the Individual race, expect Evansville Memorial's Matt Schadler, Carmel's Colin Murphy, Fishers' Sam Kuhn and CAI's Skylar Stidam to be battling towards the front. Either one of those four could take home the individual crown.

For the Ladies, the field isn't quite as stacked, but that doesn't mean it won't be any less exciting. There will be four teams from this week's IATCCC Poll in the field, 8 Crown Point, 11 Floyd Central, 15 Westfield and 25 Evansville Memorial.

It will be a great battle between Crown Point and Floyd Central who are both coming off big wins. Crown Point beat 10th ranked Lowell at the Crown Point Invitational last weekend, placing four in the top ten. Floyd Central came out victorious after taking on twenty of the top teams in the Louisville area at the St. X Tiger Run last Saturday. I would give a slight edge to Crown Point, with two sub-19 runners in Maddie Russin and Jaelyn Burgos, but with Floyd Central's ability to run as a pack, I wouldn't be surprised if they pulled out the victory.

In the individual race, Emma Wilson from Greencastle is the clear favorite. She was second here last year, but has already posted a 17:51 this season. Look for Russin and Burgos to be in the chase pack with Presley Warren from Evansville Memorial, and McKenna Cavanaugh from CAI. Stay tune to MileSplit Indiana throughout the weekend for coverage of the meet. We will have race videos, and interviews up on the site.