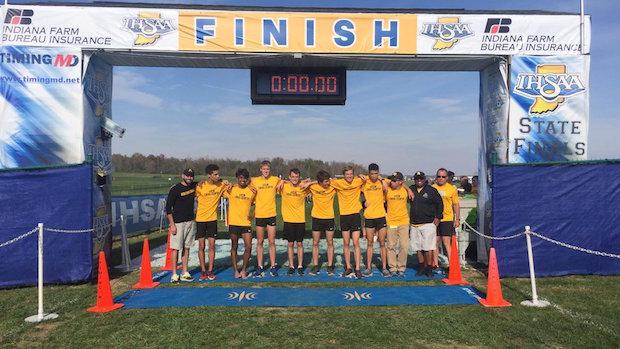 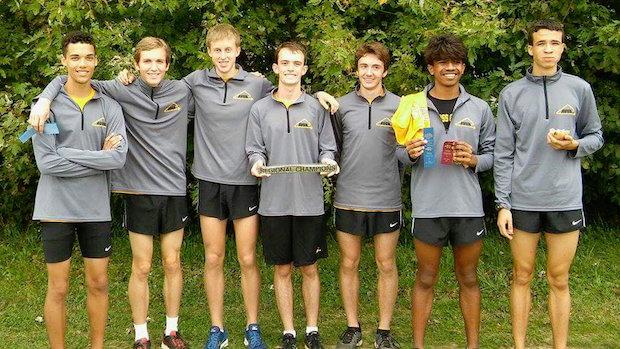 1. How many years have you been coaching high school cross country (and at your current school)?
This is my 10th year coaching high school cross country, and eighth year at Avon.
2. What do you attribute as the main reasons for the success of your program?
There are a lot of different factors that go into a successful program, but I feel that the first is culture.  Talent, work ethic, and numbers go a long way, but you have to have good team cohesion if you want to do well when it counts.  Guys have to lay it out for each other in meets and "live the life" as they say.  Successful distance running is a 24-hour endeavor.  It's not just running hard at practice and forgetting about it until the next day - you have to be aware of your recovery (i.e., ice, sleep, water, nutrition, etc.) and take care of yourself away from practice.  In order to do that, you have to want to be a runner 24/7 - not just the 2 hours at practice.  Our guys do a great job of that.  They love the lifestyle, and that culture is why we've had success each year.
3. What would be the best way to describe your style and philosophy of coaching and working with high school runners?
I try to train our kids like a collegiate program - not the volume and intensity necessarily, but the same approach, mindset, and expectations.  There's a lot of science into our training methodology from things I've learned over the years from other programs (collegiate and high school) that makes sense and can be utilized at the high school level.  I am also very open with my athletes about what we do - I want them to understand why we train the way we train, not just what the workout is for that day.  I feel like that creates a better understanding of training which translates into confidence in races.
4. What are your core beliefs in your training plan and workouts for your cross country squads?
I tell our kids to embody seven things:  1.  Consistency (i.e., mileage, sleep, nutrition, water intake, rehab, etc.); 2. Accept pain - you have to hurt to beat people, plain and simple; the guy who wins is typically the one that gives up the least; 3. Sacrifice / commitment - you can't live the typical high school kid's life if you're a distance runner.  There are certain things you have to hang back on in your social life if you want to train at your best.  4.  Trust - trust what we do in training and that it will pay off when it counts (this also includes being patient - there is no quick fix in appropriate distance running training).  5.  Confidence - it's amazing what a positive mindset can do for you when everything else hurts and is telling you to stop.  6.  Humility - we celebrate victories and learn from our defeats, but we don't dwell on either very long.  7.  Accountability - we're all in this together; our guys train hard, and expect their teammates around them to do the same.
In terms of workouts, once the meets start happening our weekly setup is like this:  Monday is our threshold day (i.e., tempo runs or cutdown progressive runs); Tuesdayis maintenance run, strides, and weights; Wednesday is usually a VO2 interval day or shorter, quicker intervals, depending on where we are in the season; Thursday is maintenance run and weights again; Friday is a pre-meet maintenance run and strides; Saturday is meet day; and Sunday is our long run day with some strides.  We also do core five days / week and either hurdle / myrtl work for hip mobility 5-6 days / week.
5. How many runners do you return from your top 7 from a year ago?
Our top 7 lineup last year changed quite a bit, as will this year's team.  From the seven guys that ran in the IHSAA State meet last year, we return four - Nyc Sigmon, Hunter Wakefield, Keith Abramson, and Ben Schmitt.
6. Who is your projected top 7 heading into the cross country season?
I'd say in addition to the four guys mentioned above, Ethan Goddard is also in that group - he's been running great and is training right with Nyc as our top two guys right now.  Owen Fink has come back from being hurt last spring and is running great for us, in our top 3-4 in workouts.  Our seventh spot is wide open and have a couple handfuls of guys battling for it.
7. Who are your team captains or leaders and what stands out about them as examples for the rest of their teammates?
Our team captains this year are seniors Brayden Enz, Owen Fink, Hunter Wakefield, Tim Wilson, junior Ethan Goddard, and sophomore Jake Shepherd.  Our captains this year are a great group of returning varsity runners, junior varsity runners, and guys who just do things right and show a great example for the rest of the team. 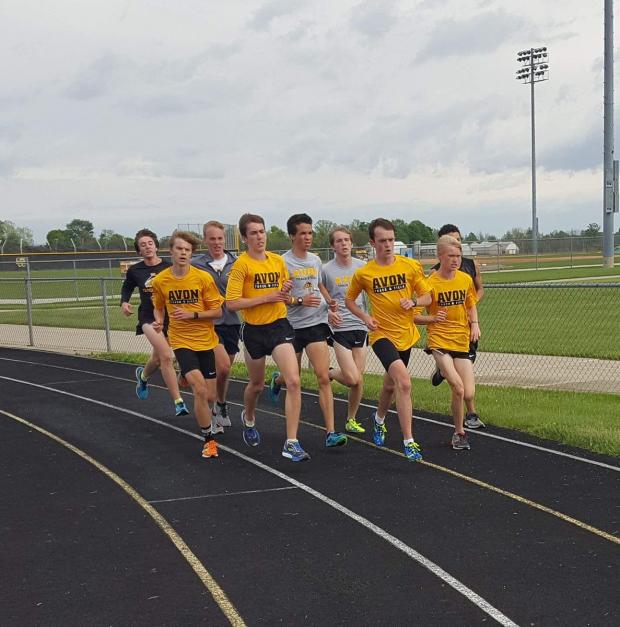 8. Who have you been most impressed or surprised with their improvement and/or fitness from their summer training?
I've been very happy with the progression our returners have made as a whole, but one person that has stood out is Owen Fink.  Owen was sidelined the entire track season with an injury that took a long time to gradually come back from.  He was very meticulous in doing things right, and he's now gone from a solid junior varsity runner to one of our top 3-4 guys in workouts and our first meet.  He's a great example of what training smart will do when it's done right.  Nyc Sigmon and Ethan Goddard are probably our most fit guys right now, and are impressing me day in and day out.
9. Any impactful freshmen or transfers to join the team this season?
We have our largest group of freshmen that we've ever had, at 24.  Sam Crook and Kevin Rostam have been leading that group, but there are a lot of newcomers that are starting to get really fit and are handling workouts well.
10. What are the top invitational meets that your team will be attending this season?
We have a great meet schedule, but our biggest meets before the championship season (HCC, IHSAA tournament) are the State Preview meet on September 2 which we added for the first time, as well as the Ben Davis Invitational on September 9 and the Golden Bear Invitational on September 23.  Those are meets with big fields and also on courses that we'll run on in the IHSAA tournament, so it's nice to get a feel of courses like that early on.
11. What will be the biggest obstacle or challenge facing your team this season?
So far, having so many kids on the roster (65 total) has created a bit of a challenge in keeping everything individualized, but it's gone very well.  We have a large spectrum of athletes, with some looking to run well under 16 minutes for 5k, and some trying to break 30 minutes.  It's a lot of fun, and the guys are very encouraging to each other, regardless of ability.
12. What will be the biggest reason why your team is successful this season?
Our success will be dependent upon how well our guys can stay healthy and keep each other accountable throughout the season.  We compete in the best part of Indiana, and we have to take advantage of every opportunity we can outside of practice to make sure we're as ready as we can be - because if we don't, another team around here will.  I stress the little things over and over to our runners because it's vital.
13. What is a favorite annual or common pre-season workout or run for your team?
We do a 4k time trial in my neighborhood at the end of the summer, followed by pancakes made by our wonderful parent group.  Our top seven guys at the time draft the rest of the team behind closed doors and we score it like a meet, with the winners getting pancakes first.  It's  a lot of fun and brings the whole team together really well as we head into the school year.
14. What is a favorite annual or common mid-season workout for your team?
Once meets start, we keep it pretty simple in terms of our approach in workouts.  I'll give out random awards here and there for guys who have the smallest gap in intervals, or just who sticks out the most and has made a big jump over the course of the season.  However, the team's favorite workout that we do in late September / early October is the "Michigan," which includes intervals on the track (1600m, 1200m, 800m, 400m for varsity, or 1200m, 1000m, 600m, 400m for JV) with tempo 1200's or 1600's between each.
15. What is a favorite annual or common championship season or end-of-season workout for your team?
We always end our season with a 1600m time trial on the track so that the guys can see how fast they can run a middle distance event off of longer, 5k training.  We do our JV time trial a few days after the HCC meet, and the varsity time trial a few days after the State meet.
16. What are your top 3 goals for this year's squad?
1.  Get back to the State meet and try to make it on the podium (top 5).
2.  Have our best JV meet of the season at the HCC meet on September 30.
3.  Make a run at the HCC championship and defend our County, Sectional, and Regional titles from last year.