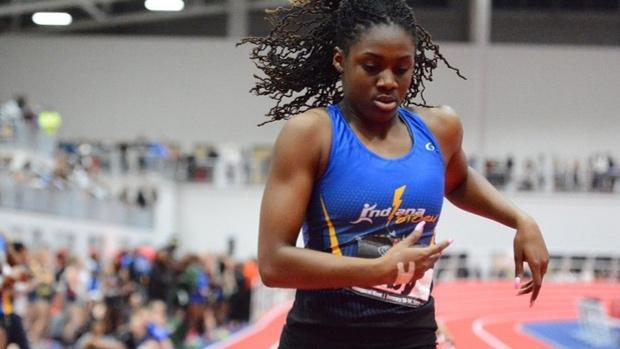 The Va. Showcase arrived in Lynna Irby's lap on Friday and Saturday the earliest of any indoor meet of her high school career.

So did she have first meet jitters?

On the trip from Indiana to Virginia, maybe.

And yet, it almost felt like the Indianapolis Pike High (IN) senior and University of Georgia signee was in top form once she got on he track on Jan. 13-14 at Liberty University in Lynchburg.

The nationally-ranked sprinter won the 300m run in a US# 2 time of 38.09 seconds and added a runner-up performance in the 55m in 7.04 seconds, trailing only behind US #2 Daija Lampkin of Middletown (De.), at the newly-minted banked track.

"It went really well considering it was my season opener," said Irby, who owns a US #2 time in the 55m in 6.94 seconds. "Season openers are sometimes kind of shaky when you're shaking some rust off, but I think it went well."

Following an expansive outdoor season, where Irby placed second at the IAAF World U20 Championships in the 400m, won the USATF Junior National Outdoor Track & Field Championships in the same event and secured her fifth and sixth state titles in both the 200m and 400m at Indiana's championships, the senior took a small break.

But in the six-week transition back into the indoor season, Irby's coach Michael Vinson said the veteran got right back into gear.

"We're early in her training," Vinson said. "But I'll give you that we may have ramped up just a tad more than normal because we were running in this 300."

Only, the effort in the 300m may ultimately be one of a couple this indoor season, Vinson said, as Irby looks to concentrate on the 55m and 200m to help develop better speed.

"We're really focused on dropping the sprint times," he said. "That's the reason we're focusing on the 60 and 200. If we get those sprint times down, everything else will follow." 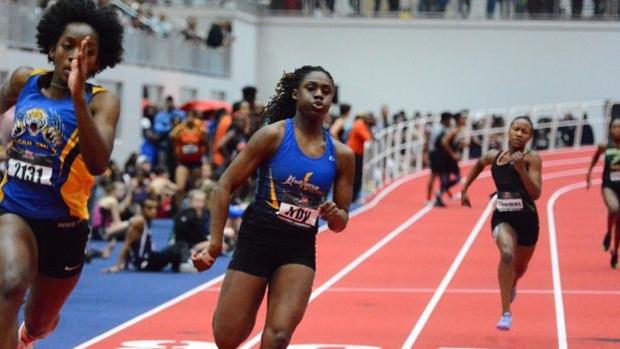 There are also other not-so-subtle goals that remain: New Balance Nationals Indoor. A year ago, Irby missed the finals in the 200m, finishing 9th in the preliminary stages.

"I was a little disappointed in that," she said. "But this year I know what to expect. Hopefully the finals are in my future."

Vinson added: "One of her goals for sure is to plan on being at the finals for the 200 and have a better showing in the 60. I feel comfortable saying that, because we've talked about it more than once."

The Va. Showcase was a good start. While Irby intimated her block starts in the 55m and 300m varied, she added that they're much better than what they were even a year ago.

"We've been hitting the blocks hard these last few weeks and we'll continue to hit them hard," she said. "They're either really good or really bad."

Irby has highlighted a few meets in the near future, including the University of Kentucky High School Invitational on Feb. 18.

There, Irby, who has achieved pretty much all you can in a career, will be afforded another chance to go fast against premier competition.

The senior said she expects nothing less of herself.

"We're just going to continue to get in shape," she said. "As we get back into the swing of things, we'll get more meets under my belt and I'll get faster."

To connect with Milesplit Content Producer Cory Mull, follow him on Twitter @bycorymull. Have a story idea? We're all about those. Email him at cory.mull@flosports.tv. To have access to year-round stats, breaking news, stories and videos, register for Milesplit Indiana here.