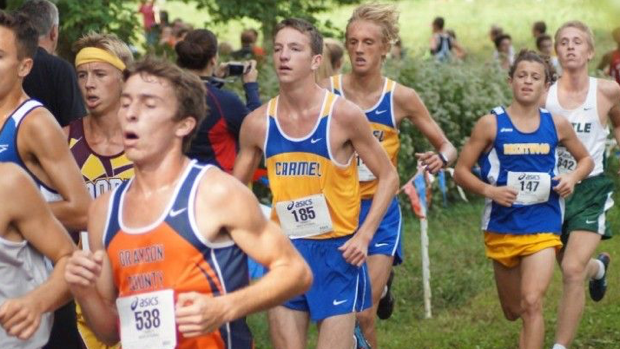 We caught up Carmel runner Teddy Browning. Browning plays a critical role in the success of the Greyhounds squad. The rising senior was consistently the #2 man throughout the season for Carmel. Success runs in the family as his brother, Bobby, was seventh at the 2013 State Meet. We talked with Bobby about what its like to run for Carmel and his goals for the season.

First off, how did you start running?

When I was in 6th grade my brother Bobby told me that I should come out for the cross country team because it was just something fun to do and it was easy. Definitely is not easy but it’s so fun and fulfilling. I didn’t really like running in middle school so I stopped after 6th grade and picked up tennis. From 6th grade to the end of freshman year I played tennis and then I got cut from the team sophomore year and Bobby convinced me to run XC just like in middle school, except he didn’t say the easy part.

What has been your favorite memory from your career so far?

My favorite memory is no doubt the 2014 NXR race. I had such a disappointing state meet and really beat myself up about it so NXR was my redemption race. The fact that everyone on the team had such a great race and wanted nothing more to make it to Portland made that race something really special.

How has summer training been going for you? Are you ready for meets to start?

Summer training has been great. These last few weeks especially have showed that our whole team is really starting to get focused and gearing up for this year. I’m pumped for meets to finally start. It’s a long summer of physical and mental training for these meets and our team is ready to roll.

What are your goals for yourself this season?

Qualify for the national meet as a team

Running for Carmel is a real privilege. The support we get from each other, our parents, and coaches is something that I can’t imagine many other teams have. Every guy, whether it’s our fastest guy or our slowest guy, care about each other.

You guys return a trio from your second place team from state last year. Do you think your team is capable of winning the state title this year?

Ben Tom and I have become pretty close running with each other for the last 2 years. We always have the goal of winning the state meet and I think we can achieve that. The three of us will be contributors to the team being state-contenders, but we’ve got a lot of guys on the team who can fill the top 7 spots this year and have a huge impact on the team, and that’s what makes this year special.

Your team went through a coaching change last year with your assistant coach taking over as the head coach. Did things change much with Coach Altevogt taking over?

One goal is always to be in the hunt for a state championship, and that has stayed the same.

Your brother is also a very good runner who now runs at IU. What is the relationship like between you two when it comes to running? Have you learned anything about the sport from your older brother?

Bobby and I are really close. When it comes to running, I wasn’t really able to keep up with him at any distance until about last year, whether it was a workout or a mileage run. Now that I’ve been able to progress more as a runner, it’s really cool to be able to go out and go on a run with my brother. What I’ve really learned from Bobby is the mental aspect of the course and doing the little things. When I wasn’t too dedicated of a runner I would be skipping weekend runs, not wanting anything to do with any extra work, and just doing whatever I felt like doing on a given day. Watching Bobby’s dedication to the sport changed how I now look at it. He does anything to get the job done, whether it’s getting up at 4:30 AM to do a workout before graduation all the way to doing extra push-ups whenever he can.

Your teammate, Ben Veatch, is one of the top distance runners in the nation. What is it like to train with someone who is an 8:53 3200m runner? Does having someone like that push other varsity guys to be even better?

What’s crazy about running with Ben is that we really never feel like we’re running with one of the fastest dudes in the nation. Of course, we get dusted by him in any XC workouts, but he’s such a humble guy that you never think about who you’re training with. Also, we never shy away from making fun of him when the opportunity presents itself so that keeps him nice and humble too. When it comes to motivation, having him around pushes the varsity guys without a doubt, but I also think it pushes everyone else on the team. It’s probably pretty cool for some of these freshmen who idolize Ben as a runner when he is cheering each of them on by name.