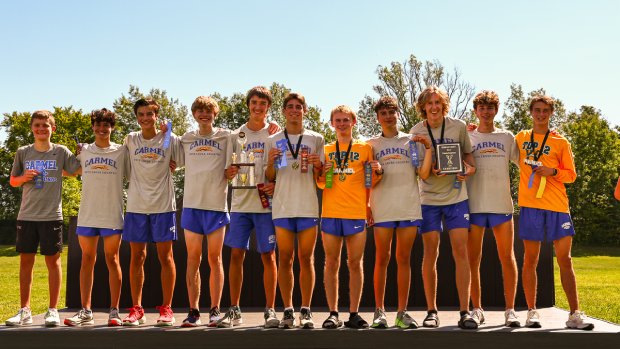 (Carmel boys after winning the Hamilton County Championships in August. The Greyhounds are currently ranked third in the nation and are set to matchup against #4 ranked Jesuit at Nike Town Twilight on Saturday. -Photo by Kent Graham)

Fall is finally here and the weather is starting to turn into ultimate cross country conditions. On Saturday, the calendar will turn to October and for teams all around the country, that usually means the start of the championship season. Before different state's start their postseason tournaments, there is one additional meet that many schools across the nation will try to conquer. The Nike XC Town Twilight meet is back at the LaVern Gibson Championship Cross Country Course for the fifth consecutive year and will welcome some of the state and nation's best to compete on a Saturday night in October.

The Nike Town Twilight meet has grown in stature since its debut in 2018. The championship races that year had about 150 competitors in each race. This year, the championship races could see more than double the amount of participants from 2018. In total, over 100 schools will be represented throughout the evening over the course of 6 different races. A girls and boys JV race, a boys and girls "Open" race and the main events, the girls and boys "USA Race of Champions."

The two main events will be run "Under the Lights" on a spotlight lit course throughout that will add to the great atmosphere and championship caliber of the Nike Town Twilight meet.

Let's preview some of the teams to watch for that will compete in Terre Haute on Saturday night!

The Knights are coming off a meet where they beat two other top teams in Illinois and now are considered as a favorite for the State title in Illinois. Mt. Propsect has had 6 girls this season run under 18 minutes over the 3 mile distance. They are deep and also have a front runner in senior Hailey Erickson that has had very successful season so far and has run to a season best time of 17:09 for 3 miles. This is a perfect meet for the Knights to test their ability against some other high caliber teams.

The Bulldogs have had a great run of success over the last couple years. Last year's Indiana State Champions brought back a majority of their top 7 this year including senior Lily Baker who was the winner of the Nike Town Twilight meet a year ago. This will be North's first real test of the season after the Rick Weinheimer Classic was postponed mid-race interrupting the battle between them and other Indiana state contender Noblesville. Senior Julia Kiesler holds the current #3 time in Indiana after running 17:28.30 to win the Eagle Classic on September 10th.

As mentioned above, the Millers are another State title contender for Indiana and they have the pack to prove it. Noblesville won the Hoosier Crossroads Conference in dominating fashion by pushing their five scorers across in third, fourth, fifth, sixth and seventh to score 25 points. Junior Nadia Perez leads the charge for the Millers as their #1 runner with a current PR of 18:08. With an average time of 18:36 at the conference meet, Noblesville's ability to pack run makes them a sure contender in the State and a contender for the top spot at Twilight Saturday.

Mason is one of the top teams in Ohio and has some youth and excitement in their varsity runners. Freshmen Efa Paschka leads the way at this point with a season best of 18:09. There are also two other underclassmen in the Comets scoring five in freshmen Bella Teply and sophomore Addison Stephens that will contribute to Mason's success at Twilight.

Assumption (KY) - Honorable mention in MileSplit50 rankings.
Another honorable mention in this week's national rankings, Assumption brings a solid pack with them to Terre Haute on Saturday night. Reagan Gilmore leads the way for the Rockets this season with a 19:08 season best. This is a team with no seniors listed in their scoring five, so we can only make the... assumption, that their future is bright as well. In 2013, the Greyhounds placed fifth at Nike Cross Nationals posting the team's best finish on the national stage. This year's version of the 'Hounds may be better than that group nine years ago. Carmel is currently third in the MileSplit50 rankings and has a strong hold on the state of Indiana after a couple dominating wins at the Hamilton County championships and the Brown County Eagle Classic (meets of which contained other ranked or honorably mentioned teams).

The Hounds front runner, Kole Mathison, has raced to a 14:52 this season and is one of the top returners in the nation from last season. He is certainly a contender to win a national title later on in 2022. Carmel's 2-5 runners however, is what makes them a true team podium contender nationally with all 5 scorers under 15:53 this season. They will face their toughest test of the season on Saturday against our next previewed team, Jesuit out of New Orleans.

Jesuit made some last minute switches to their competition plans and will now compete at the Nike Town Twilight meet Saturday night. The Blue Jays, traveling all the way from New Orleans will try to matchup with Carmel and wow do they matchup well on paper (or the computer screen). Though Carmel will surely have an edge at the #1 runner, Jesuit's 2-4 runners made up of Leland Crawford, Robert Buisson, and Patrick Dowd give the Jays a tighter pack at those runners than Carmel. That is where they will need to make up some scoring points as their fifth is back from that of Carmel's. This will be a great test for Jesuit facing off against another Top 5 team in the National Rankings.

Plainfield (South) though ranked 6th may be an under the radar team. How can that be for a team ranked so high? The Cougars have no 5k meets thus far in the season but their 3 mile bests speak for themselves. At the First to the Finish Invitational in September, Plainfield's team average for 3 miles was 14:53 led by Camyn Viger's 14:22. That team average translates to about a 15:26 5k. Not many teams in the country let alone this field have a team average like that of the Cougars. They will certainly be ready to show they can run the extra 0.1 miles when the competition is this fierce.

The Comets will compete in Indiana for the second weekend in a row after winning last week's Culver Invitational. Mason comes into Nike Town ranked 17th and for good reason. Front runner Isaac Schachleiter has posted a 15:11 this season and was also the individual winner of the Culver Invite last weekend. The Comets bring up a great pack as well with their top 5 all 16:11 or better this season. They will also have a great matchup this weekend against #18 Rock Bridge out of Missouri.

The Bruins are led by a dynamic duo of Ian Kemey and Andrew Hauser as the two have run 15:21 and 15:32 respectively. They were second to Mason earlier in the season at a meet in Ohio, but Rock Bridge will certainly need the remainder of their scorers to step up to compete with teams like Mason and Zionsville but they are off to a great start with Kemey and Hauser at the front.

Zionsville (IN) - Ranked 25th in this week's MileSplit50 rankings.

The Eagles find themselves nationally ranked, likely for the first time in their teams history. Also one of the top podium contenders in the state of Indiana, Zionsville is another team with a fantastic pack of runners. At the Brown County Eagle Classic earlier in September, Zionsville had a 1-5 spread of only 20 seconds that spanned Matthew Helton's 15:28 to Evan Mayo's 15:48. If they can get some low scoring  from their 1 and 2, the Eagles certainly have a good enough scoring pack to compete with some of the teams above.

In summation, Saturday night at LaVern Gibson will feature a total of 8 nationally ranked teams (2 girls, 6 boys) and 4 more honorable mentions. Outside of the national meets themselves, this may be the best team competition we could see this season. So buckle up, grab your flashlights and get ready for some fireworks (no actually, they do fireworks at this meet after the awards) when teams take the course at Nike Town Twilight on Saturday night!

Check back to the MileSplit Indiana Website after the meet for photos, videos, and interviews from Nike Town Twilight.