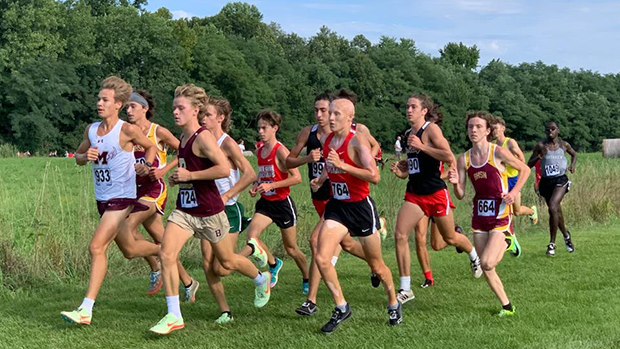 Terre Haute, IN - The 2022 cross country season in Indiana "kicked off" with a bang as the famous LaVern Gibson championship course played host to over 40 teams participating in the Valley Kickoff Invitational. The site of the IHSAA State meet for the last 18 seasons saw some of the state's best start their seasons off on the right foot on their way to stellar performances.

The girls championship race was first to take the course at 9:00 am while the temperature was still in the 60's making for a surprisingly cool August morning. The competition however, was heating up the course as Jessica Hegedus of Avon raced to the win in a time of 19:11.9 holding an almost 20 second gap on 2nd place finisher Gnister Grant of Northview who had a finishing time of 19:30.4. Hegedus and Grant along with the duo of Xavery Weisman of Pike Central and Ally Wigand of Jasper paced the field through the first kilometer in 3:30. The group remained together but it wasn't long before Hegedus pushed the pace about 2k in and never looked back on her way to victory.

Wigand and Weisman ended up in 4th and 5th place respectively as Abby Jordan of Maconaquah finished 3rd by strategically working her way up after starting outside the top 50 through the 1k mark. Jordan had the fastest last 2k of all competitors to help her move into the top 3 at race's end.

In the girls team race, it was the Panthers of North Central that ran to victory as they were able to put all five of their scorers into the top 20 of the meet to finish with 59 points.

The Panthers return their top 6 from last year's team that placed 11th at State. Though poised to improve on that finish in October, today was just about enjoying the day!

"No expectations today. We wanted to just get out there, enjoy the weather and the course and be thankful we are racing again," North Central coaches iterated to MileSplit Indiana.

Following North Central's dominant performance, the Northview Knights placed 2nd with 110 points, the other Panthers of Bloomington South placed 3rd with 158 points, Chesterton was 4th with 204 points, and 5th place was Avon with 220 points. (Aurelia Martoglio (66) of Bloomington South and Lucy Wood (106) of Brebeuf Jesuit race down the hill at LaVern Gibson Championship Course, on their way to Top 20 finishes.)

The boys championship race featured many top returners from last year's State finals looking to once again make their mark on the Lavern Gibson course.

Through the first two miles of the race, a pack of about 10 runners, led by Center Grove's Parker Mimbela, Floyd Central's Will Conway, and Brebeuf Jesuit's Cameron Todd, remained together waiting to see who would finally push the pace.

Within a couple minutes it was Mishawaka's Liam Bauschke who raced to the front to see who would go with him. Conway was the most confident volunteer of Bauschke's invitation as the two battled for the next few minutes of racing. But when the leading gator came around that final turn with 400 meters to go, Conway had pulled ahead and was strolling to victory as he quickly crossed the finish line in a time of 15:46.1, a blazing time for a 5k, at LaVern, in August!

"Today was one of those days where my main goal was just to have fun, and to me working hard and hurting is fun," Conway said in a post-race interview with MileSplit.

Part of that fun for Conway was first in the race plan, then in the execution of said plan. "I went out with the leaders, tried to hold back a little bit...we got to the 3k, I still felt good up the hill, I looked at my coach and he's like "stay back, stay back." Then at 4k I really made my move and the rest was that."

The boys team race belonged to Indiana Runner's preseason ranked #1 team, Center Grove, winning with 132 points, 19 ahead of defending state champion Brebeuf Jesuit who had 151 points. The Cougars of Bloomington North placed 3rd with 168 points, followed by Chesterton with 197 points, and the Bloomington South Panthers rounded out the top 5 with 205 points.

The Carmel girls and the Westfield boys reserve teams also took first place in the team scores in their respective races.

A cool August morning turned hot quickly on the course as many teams turned to Lavern Gibson as the starting point to another year. So welcome back to the world of Indiana Cross Country, because it is going to be a fun season.

Be on the lookout for more meet recaps from the first weekend of racing to appear on in.milesplit.com in the coming days.