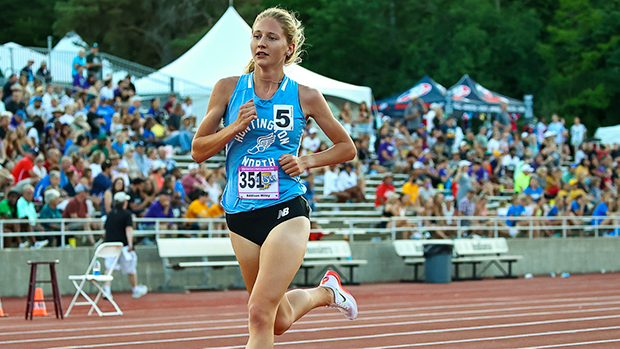 It should come as a little surprise as to which Indiana girl would win the Gatorade Athlete of the Year after the season Addy Wiley has had. The recent Huntington North graduate has once again been named the Gatorade Indiana Girl Track and Field Athlete of the Year. Wiley has had quite the senior campaign, capping it off with a national record in the 1600 and winning the NSAF Nationals in the 800, and following it up by earning a spot on Team USA for the U20 World Championships in the 1500. Read the complete press release from Gatorade below.

CHICAGO (June 30, 2022) - In its 37th year of honoring the nation's best high school athletes, Gatorade today announced Addy Wiley of Huntington North High School is the 2021-22 Gatorade Indiana Girls Track & Field Player of the Year. Wiley is the first Gatorade Indiana Girls Track & Field Player of the Year to be chosen from Huntington North High School.
The award, which recognizes not only outstanding athletic excellence, but also high standards of academic achievement and exemplary character demonstrated on and off the field, distinguishes Wiley as Indiana's best high school girls track & field athlete. Now a finalist for the prestigious Gatorade National Girls Track & Field Player of the Year award to be announced in July, Wiley joins an elite alumni association of state award-winners in 12 sports, including Lolo Jones (1997-98, Roosevelt High School, Iowa), Allyson Felix (2002-03, Los Angeles Baptist High School, Calif.), Robert Griffin III (2006-07, Copperas Cove High School, Texas), Grant Fisher (2014- 15 & 2013-14, Grand Blanc High School, Mich.) and Candace Hill (2014-15, Rockdale County High School, Ga.).
The 5-foot-8 senior shattered the national record in the 1600-meter run this past season with a clocking of 4:26.16 at the Grand Valley State Midwest Redemption meet, slicing more than seven seconds off the previous American prep record. The state's returning Gatorade Player of the Year in girls track and field, Wiley also won a national title in the 800-meter run at June's Nike Outdoor Nationals, breaking the tape in 2:04.64. After becoming the first Indiana girl to ever win both the 800 and 1600 (at the 2021 state meet), she repeated the feat as a senior, setting new state meet records of 2:06.26 in the former and 4:38.69 in the latter.
Wiley has served as a freshman mentor at her school and has volunteered locally on behalf of Ronald McDonald House Charities, Blessings in a Backpack and youth basketball camps. "Addy is quite a talent, and one this state may not see again in a long time," said Huntington North High Schoolcoach Brian Milton. "She's the fastest 1,600- meter runner in the nation and she's given us-and everyone who knows her story-the inspiration to be better and not let the hurdles of life interfere with our goals."
Wiley has maintained a 3.81 GPA in the classroom. She has signed a National Letter of Intent to run on scholarship at the University of Colorado this fall. The Gatorade Player of the Year program annually recognizes one winner in the District of Columbia and each of the 50 states that sanction high school football, girls volleyball, boys and girls cross country, boys and girls basketball, boys and girls soccer, baseball, softball, and boys and girls track & field, and awards one National Player of the Year in each sport.
The selection process is administered by the Gatorade Player of the Year Selection Committee, which leverages experts including coaches, scouts, media and others as sources to help evaluate and determine the state winners in each sport.
Two-time winner Wiley joins recent Gatorade Indiana Girls Track & Field Players of the Year Ramiah Elliott (2019-20 & 2018-19, North Central High School), and Semira Killebrew (2017-18, Brebeuf Jesuit Preparatory School), among the state's list of former award winners.
Gatorade has a long-standing history of serving athlete communities and understands how sports instill valuable lifelong skills on and off the field. Through Gatorade's "Play it Forward" platform, Wiley has the opportunity to award a $1,000 grant to a local or national organization of their choosing that helps young athletes realize the benefits of playing sports. Wiley is also eligible to submit a short video explaining why the organization they chose is deserving of one of twelve $10,000 spotlight grants, which will be announced throughout the year. To date, Gatorade Player of the Year winners' grants have totaled more than $3.5 million across more than 1,300 organizations.
Since the program's inception in 1985, Gatorade Player of the Year award recipients have won hundreds of professional and college championships, and many have also turned into pillars in their communities, becoming coaches, business owners and educators.
To learn more about the Gatorade Player of the Year program, check out past winners or to nominate student-athletes, visit playeroftheyear.gatorade.com or follow us on social media on Facebook at facebook.com/GatoradePOY, Instagram at instagram.com/Gatorade and Twitter at twitter.com/Gatorade.