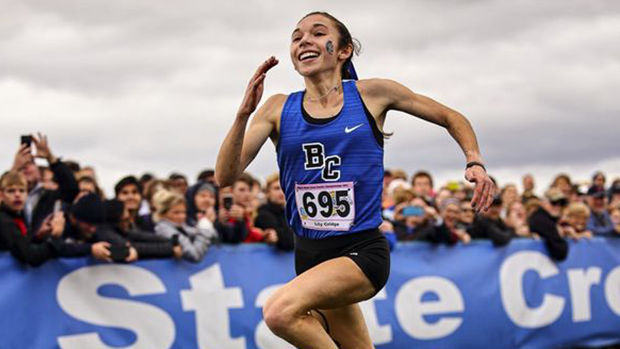 In a season and current crop of full of top-level talent, some of the best Indiana has enjoyed at any single moment, Lily Cridge, Bishops Chatard, put her stamp as the top runner. The junior posted fast times and victories ever single time she raced in the IHSAA season and added a stellar post-season to her resume to cement her season as one of the finest ever by an Indiana high school female.

The 2021 cross country season saw an incredible twelve girls break 18:00. The girls racing this season included three Eastbay national qualifiers, a runner-up at the Midwest Team Nationals in Terre Haute, and owning track PR's like 2:04 in the 800m, 4:38 in the mile, and 10:14 in the 3200m- just to give a few resume points.

Yet, seemingly with ease most of the season, Cridge won meet after meet. Her only defeats this season were in the post-season where she finished third at the NXR Midwest Qualifier and was National Runner-Up at the Garmin Running Lane National Championships to the undisputed national champion, Natalie Cook from Flower Mound. That is the eye-popping time Cridge ran to be national runner-up at the Running Lane National Championships. That sets the Indiana All-Time best for a grass 5k. Her times adds to her growing status as possibly Indiana's best distance runner ever. She owns a whopping 10:03 3200m time from last season- as just a sophomore.

Cridge was dominant this season in IHSAA meets. She won the Shelbyville Semi-State by 42 seconds over two eventual Top 5 finishers at the state finals. Cridge doubled down on her margin of victory by winning the state title by an astonishing 31 seconds over Terre Haute's challenging course on a sloppy day.

Dan Kinghorn, head coach for both boys and girls at Bishop Chatard, was fully aware of what might come form Cridge this season.

"After this past track season, I felt that this could be a special season for Lily. However, I also knew that this was a historically great group of individual girls. We even had two Eastbay finalists in our Sectional."

"It was clear to me early on, though, that Lily was on a mission and she attacked this season and her training with intensity, drive, and determination."

This outcome was not exactly inevitable even if Cridge made it seem easy with her trademark smile at almost every point in her races while she drove the pace home. Cridge missed the 2020 cross country season before storming back in the following track season.

Coach Kinghorn took notice of this and her above mentioned intensity. "The culmination (of her hard work) was an undefeated IHSAA season, many course and meet records, an individual state title, and a runner-up finish at Garmin Running Lane in a state record. In my opinion it is one of the greatest season in Indiana history and I am so proud of Lily for all that she has overcome and all that she has accomplished."

It is easy to root for someone so appreciative and who shows so much joy for running. Lily Cridge's 2021 season was definitely one for the records books.
Lily Cridge: Gold Race Runner Up Garmin RunningLane Cross Country Championships Dec 05, 2021
High School Girls' 5k Championship Garmin RunningLane Cross Country Championships Dec 04, 2021
Interview with XC State Champion Lily Cridge Nov 03, 2021
On The Line: Indiana Regionals Oct 20, 2021
On The Line: Predicting National Winners Oct 12, 2021
For The Record: Lily Cridge Sep 14, 2021
Tweets by MileSplitIN