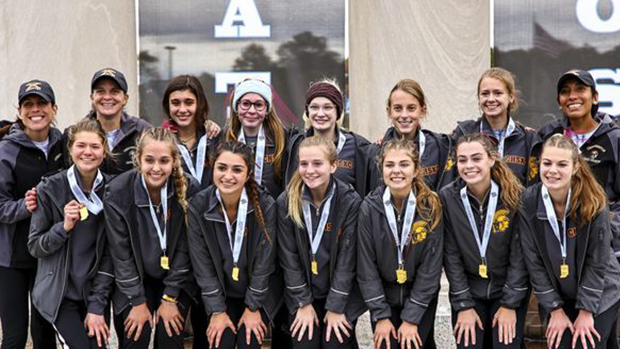 Although Lily Cridge ran away from the individual field in amazing fashion, the final team results of the 2021 IHSAA State Championships were simply amazing, too close to call.

Both the team title and the podium positions were tremendously tight and, even though maybe not an upset, the order of places in the team standings between No. 3 and No. 12 were anyone's guess after the meet.

Columbus North and Carmel battled at every position throughout their respective lineups to an almost identical meet. Lily Baker kicked off the team scoring between the two powerhouses with her second-place team finish, just three seconds ahead of Alivia Romaniuk of Carmel who was third in team scoring.

Klopstad gave Carmel the advantage at position three, but Brianna Newell came in shortly after adding only 13 points to CN's total. It was tied at 19 team points through three runners. Columbus North took control with small advantages at both the fourth and fifth spots. Katherine Rumsey gave North the small advantage of both four points and four seconds over Olivia Mundt.

Abby Jacobi and Sydney Morlok closed the door on North's team scoring, finishing in 39th and 40th in the team column, only seven seconds ahead of the Greyhounds Raya Chauhan's 48th-place finish.

The small separation ended with just a nine-second difference in total time for the first five runners and a 19:17 to 19:19 average. The difference in point totals is the seventh closest in state meet history.

The drama was just beginning when it came to the team competition. Imagine only missing the podium by 20 points -- a close enough margin to get a coach combing through the results to see what they could have done differently to get over that four-point per varsity runner difference. That margin on Saturday was the not the difference between fifth and sixth-place, but rather fifth and 12th overall.

Chesterton was not a surprise for a podium position after scoring only 50 points in its New Prairie Semi-State victory but, the team may have been a bit surprised to get third. The squad's point total of 221 put them safely ahead of Hamilton Southeastern's 232.

Pre-race state ranked No. 3 Noblesville finished fifth to round out the podium positions with 254 points. HSE was even more of a surprise to grab fourth after finishing third in the New Haven Semi-State last week.

The question becomes, then, how do we interpret this mass finish?

The weather definitely could have been a factor. Although the course was not in terrible condition -- with athletes falling all over place -- it was certainly soft enough to bunch runners up together and not let people get away from each other. However, if you look at the results, teams took different paths to get there.

Some had low sticks at No. 1, but a runner in the 90's toward No. 5. Some had a close compression without the frontrunner. Looking at that part of the picture, is it fair to say that this was just an incredibly deep day?

Are teams getting more and more competitive?

We have been watching the top-end talent rise in Indiana for several years now and last year was possibly the greatest female distance track season ever in terms of overall times and national rankings for Indiana runners.

That could indicate another reason -- Indiana's overall competitive level on the girls' side is getting better and deeper.

If this is the answer, get ready for a huge jump in overall competitiveness. No matter how you interpret the results, this as a state finals to remember on the team side, and we have only alluded slightly to Lily Cridge's performance!