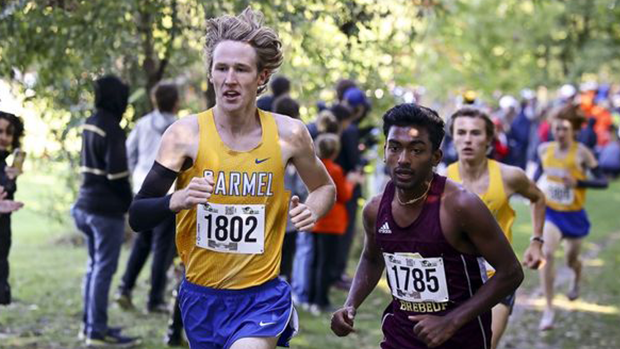 The Brebeuf and Carmel boys staged an epic battle that many thought over the summer was destined to happen several times this season. Evenly matched throughout their Top 5 runners, Brebeuf pulled out a 2-point Regional victory, 52-54. Carmel's Kole Mathison and Brebeuf's Krishna Thirunavukkarasu ran strong together for much of the race before Mathison pulled away for a 3-second win. Mathison's teammate, Charlie Schuman, ran a very strong 3rd place to help Carmel's cause. The three were timed in 15:22, 15:25, and 15:30, respectively. Westfield's Kai Connor came in 4th and Nate Killeen from North Central finished out the Top 5. Connor and Killeen led their teams to 4th and 5th place positions to qualify for the Shelbyville Semi-State this Saturday. Noblesville, led by a 6-7-8 finish in the team race, finished a strong 3rd place in the standings to sit well heading into the Semi-State.

Lily Cridge from Bishop Chatard won the race by 58 seconds in an outstanding time of 17:17 to best the Park Tudor duo of Gretchen Farley and Sophia Kennedy. The teammates were both timed in 18:15. The team battle had a much different outcome in some respects than the polls would have predicted but that was largely influenced by some teams holding out athletes- hopefully due to rest and not injury this time of year. The podium-contending girls from North Central pulled out the 10-point victory, 72-82, over Westfield. Just behind these two were Carmel and Noblesville who scored a very close 86 and 87 points, respectively. Brebeuf grabbed the final qualifying spot for the Shelbyville Semi-State with 143 points.