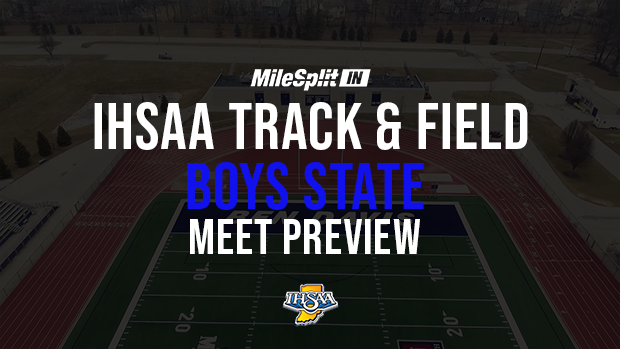 The State Finals are nearly upon us. The Boys meet will get underway with field events beginning at 3:00 on Friday, and the 4x800-meter relay will get things started on the track at 4:15. Below are previews for each and every event in this year's meet!

The top four teams in the 4x800-meter run all come out of Regional #3 at Lafayette Jefferson. Fishers took the win by less than a second over Carmel at that meet, and their time of 7:46.33 that day is the best in the state this year. Westfield actually beat both Carmel and Fishers to take the sectional championship a week earlier, and finished just a few seconds behind at the regional championships. You can expect those three teams to have a great race for the state championship, while Harrison, Fort Wayne Concordia and Leo could also be in the mix with times under 8:00 at their regionals.

The three main contenders in the 110-meter hurdles are Brownsburg's John Colquitt, Carmel's Zachary Cox, and Lawrence Central's Paul Goins. Colquitt and Cox both come from the Lafayette Jefferson Regional, where Colquitt ran a 14.07 to beat Cox by just 0.04 seconds. Goins won his regional with a relatively tame time of 14.40, but he ran the state's best time of the season in the Marion County Championships at 14.05 seconds.

Lake Central Sophomore Kameron Gethers had a breakout performance at the Crown Point Regional last week. Gethers cut 0.15 seconds from his personal best to win the regional championship in 10.77 seconds and vault himself into the conversation for the state title.

Gethers' 10.77 is faster than anyone else ran last week, though Jasiah Rogers, Esau Haynes, and Connor Czajkowski all ran times between 10.84 and 10.85 at their regionals. Haynes ran the fastest time in Indiana this season with a 10.68 in the sectional round of the state tournament, and Czajkowski ran a 10.71 at the Zionsville Invitational earlier this spring.

Columbus North's Reese Kilbarger-Stumpff won very entertaining races with Whiteland's Will Jefferson in both the sectional and regional rounds of this year's state tournament, but we will not get to see Jefferson run in the 1600 this weekend as he chose to focus on the 3200-meter run.

Instead, Kilbarger-Stumpff's competition at this meet will come from Highland Senior Lucas Guerra. The two-time cross country state runner up beat Kilbarger-Stumpff by a quarter of a second at the Flashes Showcase Miracle Mile, and will be looking to secure his first state title in his final high school race. LaPorte's Cole Raymond finished just a few seconds behind Guerra at the Crown Point Regional last week, and could be in the mix for what should be a very exciting race.

Carmel brings great teams in all the relay events, and the 4x100 is no exception. The Greyhounds are the only team to have run under forty-two seconds this year, turning in a blistering time of 41.79 to win their regional last week.

While Carmel is the clear favorite, there are at least three teams that will contend for second and could potentially challenge Carmel for the state title. Center Grove and Warren Central had a great race at their regional. Center Grove took the win on that day in 42.08 seconds, just three tenths ahead of Warren Central. Merrillville will represent the Region in this race, having run a season best time of 42.08 at the sectional round of this year's state tournament.

Carmel's Owen Schafer and Fishers' Keefer Soehngen have been racing each other since sectionals. Soehngen beat Schafer at their sectional, but it was Schafer edging out Soehngen at their regional with a state leading time of 48.01 seconds. These two are far and away the best 400 runners in the state, and they're both peaking at the right time.

Much like the 110-meter hurdles, the 300-meter hurdles is expected to come down to John Colquitt and Zachary Cox. Like in the 110, Colquitt beat Cox by .04 seconds in the 300 at Regional #3 last week with a winning time of 37.61 seconds. That time leads the state this season, and is more than a full second faster than the third best time.

With twelve athletes that ran under 1:56 at regionals last week, the 800-meter run promises to be one of the best races of the evening. Fishers' Jaylen Castillo leads that group after running a state leading 1:53.68 to win his regional last week. Noblesville's Andrew Anderson and Columbus North's Reese Kilbarger-Stumpff are the only other runners to have eclipsed 1:54 at any time this season, and there are several other athletes that could win this race.

Harrison's Connor Czajkowski and Lafayette Jefferson's Thomas Hogan come into this meet as the top two runners in the 200-meter dash. Czajkowski and Hogan have been racing each other since the first round of this tournament, with Czajkowski getting the better of Hogan in both the sectional and the regional. Czajkowsi and Hogan ran times of 21.60 and 21.73 at their regional, the only athletes to break the twenty-two second mark last week.

Lucas Guerra is the only other runner to break nine minutes this season, turning in an 8:58.75 at Distance Night in Palatine. Guerra is one of the few athletes that will be competing in both the 1600 and the 3200 on Friday.

Carmel and Bloomington North should have a good race for the state title in the 4x400-meter relay. The Greyhounds and the Cougars ran nearly identical times at their regionals last week, with Carmel winning in 3:21.79 and Bloomington North clocking a 3:21.95. The fastest time of the season belongs to Carmel, a 3:20.35 at the sectional round of the state tournament.

The high jump pit will be on state record watch Friday evening. Lawrence Central Senior Kamyren Garrett cleared 7-3 earlier this season, the best of anyone in Indiana by three inches and tied for the best in the nation. Garrett will have to go one inch higher to match the state meet record, a 7-4 set by Plymouth's Nate Patterson in 2018.

With four athletes that have jumped over 23 feet in this postseason, the long jump promises to be one of the more interesting events of the night. Boonville's Devin Mockobee won Regional #8 with a mark of 23-2.5, edging out New Albany's Ja'Raylan Johnson by a quarter of an inch. Hamilton Southeastern's Stephen Sydnor owns the best jump of the state tournament with a 23-8.25 at the Carmel Sectional, but he couldn't match that in his regional as he finished second with a 22-2.5. It's a similar story for Portage's Piere Hill, who won his sectional with a 23-1.5 but only managed a 22-4 in the regional round.

The Discus Throw is another event that could go to a number of different athletes. Leo Maxwell out of East Central has Indiana's best mark of the season with a 183-6.5 earlier this spring, with Zionsville's Ben Decoursey and Pendleton Heights' Andrew Harvey close behind at 182-11 and 182-9, respectively. Warren Central's Keon Perkin-Sullivan threw farther than anyone else in the regionals of this tournament at 180-06, where as many as 14 athletes hit the automatic state qualifying standard.

When it comes to the shot put, Columbus North's Tucker Smith has been the class of the state all year long. Smith threw a 67-10.25 to win his regional, and the second farthest anyone threw in any regional this year was a 60-4 by Bram Arnett out of Morgan Township.

Jeremy Allen's shot put record at the state meet of 66-8.5 has stood since 1997, but it is in serious danger of falling in 2021. Smith has already thrown over 67 feet on three separate occasions this year, including a 69-4.5 at the Conference Indiana Championships which ranks second in the nation.

Only two athletes have cleared 16 feet in the pole vault this year, and they come from opposite ends of the state. William Staggs out of South Knox won Regional #8 with a state leading 16-1.25, while Hobart's Riley Johnston won Regional #1 at 15-8 after clearing 16-0 earlier this season.