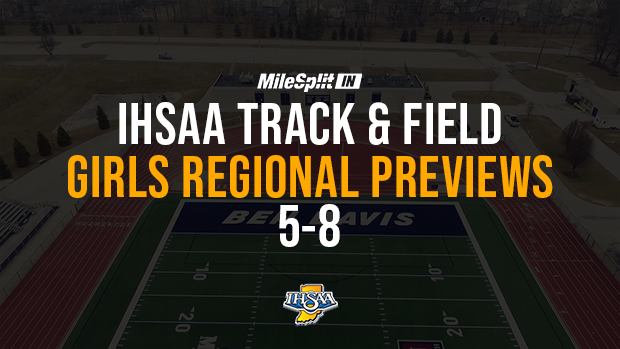 Girls Regionals is set for tonight across the state!

View meet previews for five through eight down below!

Girls Regional #5 at Ben Davis will see many of the state's leading athletes compete for the second time this postseason. The best sectional feeding into this meet is last week's Sectional 19 at Lawrence Central, and those that attended that sectional will see many of the same names at the top of the charts. Sectional 19 Champions North Central are the favorites to win this meet, but with stiffer competition throughout the meet the point gaps should be much closer. Cathedral, Bishop Chatard, and Lawrence Central will all be in the mix for the regional title.

Chatard's Lily Cridge was the story of the night at the loaded Lawrence Central sectional. Cridge ran away from the field in the closing laps of the 3200-meter run to win in 10:15.26, the fastest time in Indiana this year and number two all-time. Second place Sophia Kennedy stayed with Cridge through the first two-thirds of that race, and ran a very good time of 10:27.43 herself.

Another great performance came right after that incredible 3200 as Cathedral's 4x400-meter relay team won in 3:55.69. That time was good enough to break the school record at Cathedral, and the Leprechaun's are the only team in Indiana to break four minutes so far this season.

The 200-meter dash will be the third round of Taylor Herbert versus reigning state champion Ramiah Elliott. Herbert defeated Elliott at the Metropolitan Interscholastic Conference Championships earlier this year, but Elliott won the sectional last week by 0.04 seconds over Herbert. Elliott and Herbert are the top two sprinters in the state, so this is a rivalry we'll be able to enjoy right through the state finals.

Shenandoah's Erikka Hill continues to be the leading thrower in Indiana. Hill threw further than anyone in the state in the shot put last week with a 47-07.75, and should be able to dominate this regional as well.

The Ben Davis Regional will get started at 6:00 Eastern Time.

Led by a spectacular pair of hurdlers, the Center Grove Trojans are heavy favorites to win Girls Regional #6 at Franklin Community High School. Makensie Kramer and Skyler Sichting went 1-2 in the 300-meter hurdles and took first and third in the 100-meter hurdles for Center Grove at their sectional last week, and Kramer's times of 15.01 and 47.11 are better than anyone coming into this regional.

Columbus North kept it close with Center Grove at Sectional 21 last week, and they are likely the only team capable of challenging the Trojans for the regional championship thanks to a great group of distance runners. Mackenzie Barnett and Katherine Rumsey could lock out the top two spots in the 3200-meter run, while Barnett and Brianna Newell could do the same in the 1600-meter run.

The most competitive race at this regional may be the 100-meter dash. Five runners have season best times blanketed by just five hundredths of a second. Columbus North Seniors Helena Ho and La'monica Smith, Warren Central's Jila Vaden and Sequoia Gilbert, and Whiteland's Gabrielle Allen all have season best times between 12.57 and 12.62.

The high jump will be worth a watch at this regional. Warren Central's Tacoria Humphrey cleared 5-8 at her sectional last week, and her season best mark of 5-10 leads the state. Whiteland's Isabella Jackson also cleared 5-8 last week, which is second best in Indiana behind Humphrey. East Central's Ellie Lengrich and Greenwood's Ellie Irwin are not far behind, having cleared 5-6 and 5-5 at their sectionals.

Regional action from Franklin Community will get started at 5:30 Eastern Time.

Girls Regional #7 is at Bloomington North, and the hosts are favorites to win back-to-back regional championships. The Cougars bring a very deep and very balanced team to this meet, so while you won't see them win many events you can expect to see them finishing in the points all night long. Bloomington North has won back-to-back regional titles once before, winning in the 1995 and 1996 seasons.

Edgewood sisters Analyssa Crain and Clara Crain will lead the way in the distance events Tuesday night. The Crains finished 1-2 in both the 1600-meter run and the 3200-meter run last week, and they are both on the sectional championship winning Edgewood 4x800-meter relay team. Analyssa and Clara both opted not to run the 1600 at regional, as they focus on the 4x800 and 3200.

Bloomington South's Amiyah Davis won the 400-meter dash by more than three seconds at Sectional 26 with a time of 56.71, smashing her own meet record. That time was a little less than a second off of her season best time of 55.84, the fastest 400 time in Indiana this spring.

One of the best races of the day will be the 4x400-meter relay. Martinsville just sneaked past Bloomington North for the sectional championship last week with a 4:08.45, and this week West VIgo will join the mix. The Vikings ran a 4:10.79 to win their sectional last Tuesday.

The discus throw at this meet will feature three girls that have thrown over 130 feet this year. Charlestown's Lanae Crowe, Bloomington North's Hadley Lucas, and Linton-Stockton's Vanessa Shafford have all eclipsed that mark this season, with Crowe leading the way at a season best throw of 134-1.

Girls Sectional #7 from Bloomington North will get started at 6:00 Eastern Time.

Mehringer's hurdle times are among the best in the state, and her season best of 14.39 seconds in the 100-meter hurdles is Indiana's leading time. The second best time in that event is nearly half a second slower, a 14.82 set by Bloomington North's Kyla Kante.

The team competition at this meet will be a close one. New Albany and Floyd Central both bring good teams to meet, albeit with varying styles. New Albany brings a very strong group of sprinters, while Floyd Central will rely on their distance runners. Floyd Central and New Albany both come out of Sectional 29, and it was New Albany that took the sectional championship last week.

Floyd Central brings two of the state's top ten pole vaulters to this meet. Highlanders Reece Davis and Annalise Zeinemann cleared 12-0 and 11-6 to take the top two spots at their sectional last week, and they should fly past the field at this regional.

The most competitive race of the day may be the 800-meter run. Floyd Central's Sydney Baxter and Providence's Lily Kaiser ran 2:21.76 and 2:21.83 at Sectional 29 last week, and there are three more runners in this race that ran under 2:26 last Tuesday.

The 1600-meter run should be another good race. Jasper's Andi Vanmeter and Evansville Reitz's Jacqueline Brassaele ran 5:13.11 and 5:14.00 to win their respective sectionals.

The Evansville Central sectional will begin at 5:30 Eastern Time.