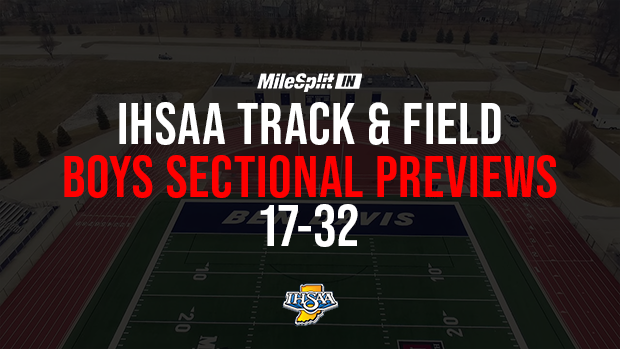 The 2021 IHSAA Track and Field state tournament is officially under way after the completion of yesterday's girls sectional action!

Tommorow marks the start of the boy's state tourney!

MileSplit is breaking down all 32 sectionals to get you up to speed with the competition!

Down below are previews for Boys Sectionals seventeen through thirty-two!

Boys Sectional 17 is at Muncie Central, and the hosts are eyeing their 58th sectional championship. To do so, they will have to beat very strong teams from Wapahani and Delta in what is sure to be one of the tightest sectionals in the state.

Muncie Central will be counting on seniors William McGlothan and Da'Marion Walker to pick up points in the sprints and hurdles, and Sam Voss to do the same in distance. Voss will have to contend with a good distance lineup from Wapahani with Griffen Miller, Nick Cook and Brandon Ellis. Delta's biggest strength is the field events, where they will be counting on Evan Conley in the throws and Abram Stitt in the jumps.

Yorktown thrower Walker Moore will be one to keep an eye on Thursday evening. Moore is easily the best thrower in the field, and recently set the school record in shot put with a throw of 55-4.5 that won the Sling 'em Invite.

Sectional action from Muncie Central will begin at 5:00 Eastern Time.

Pendleton Heights Senior Andrew Harvey comes into this meet as one of the state's premier throwers. Harvey's season best mark of 180-1 ranks second best in Indiana this year, and his best shot put of 55-9 is fifth in the state.

Sectional action from Mt Vernon will get started at 5:30 Eastern Time.

Kamyren Garrett and Paul Goins of Lawrence Central headline Boys Sectional 19. Garrett is Indiana's leading high jumper, and Goins is one of the top hurdlers in the state. Both won their events as Lawrence Central won the Marion County Championships. If the Bears can pull off a sectional championship this week, it would end a five year streak by the North Central Panthers.

North Central's hopes to win a sixth straight sectional will lie in distance runner Nate Killeen and thrower Josiah Green. Both athletes are elite talents in their events, but both will face stiff competition on Thursday. Brebeuf's Ezra Burrell will give Killeen a good race in the distance in events, while Heritage Christian's Luke Himes will challenge Green in the throws.

Sectional #19 at Lawrence Central will begin at 5:30 Eastern Time.

Southport hosts Boys Sectional #20 in what is expected to be a very close meet between Pike and Ben Davis. Pike is strongest in the sprints and jumps, while Ben Davis scores most of their points in the hurdles and distance events.

The field events will be worthy of attention on Thursday night. Ben Davis thrower David Lara-Gonzalez's best heave of 56-3 in the shot put is the third best mark in Indiana this season, and Pike's Camron Caskey has the second best high jump with a leap of 6-9.

The Southport Sectional will begin at 5:30 Eastern Time.

Boys Sectional 21 is at Warren Central, and the hosts bring the best team to this sectional. The Warriors have won their sectional 16 of the last 17 years, and they are a safe bet to win it again in 2021.

Franklin Central's Justin Healey will be one of the more dominant athletes at this meet. Healey leads a fleet of very good distance runners from Franklin Central, and his best 1600-meter run time of 4:20.8 ranks sixth in the state this season.

The Warren Central Sectional will get started at 5:30 Eastern Time

Boys Sectional 22 at Columbus North is filled with great athletes. While Center Grove is the clear favorite to win the team championship, there should be great competition in all the events throughout the evening.

Sectional 22 will also see one of the nation's best throwers in Columbus North's Tucker Smith. Smith threw a 69-4.5 at the Conference Indiana Championships in April, the third best shot put mark in the country and the best in Indiana by more than nine inches.

While Smith is expected to cruise through the shot put at this sectional, the discus is another story. Indian Creek's Aidan Neathery has thrown a 169-0 in that event this season, just a bit better than Smith's season best of 167-9.

Sectional 22 at Columbus North will begin at 5:30 Eastern Time.

Connersville brings a couple of very good pole vaulters to this meet. Brayden Jones and Cody Naylor have both cleared ten feet in that event, and should have a fun duel amongst themselves for the sectional championship.

The Connersville sectional will get started at 5:30 Eastern Time.

Boys Sectional 24 at East Central will see an extremely close race for the sectional championship between Batesville and the host Trojans. Batesville is expected to dominate the distance events at this meet with Benjamin Moster and Ean Loichinger, while East Central brings one of the state's premier throwers in Leo Maxwell. Maxwell's season best mark of 183-6.5 in the discus is better than anyone in Indiana, and his 60-0.5 in the shot put ranks second in the state.

Some of the most important events in this meet will be the relays, as they provide the best chance for Batesville and East Central to directly compete with one another and steal points in what should be close races. Expect Batesville, East Central and Franklin County to be blanketed by just a couple of seconds in all the relay events.

Boys Sectional #25 will be a tight race between Terre Haute North and Terre Haute South. Those two schools have dominated this sectional, with one of them winning each year dating back to 1990.

The best race of the day could be the 3200-meter run. Terre Haute North's Ian Gadberry, Terre Haute South's Cael Light and Northview's Jcim Grant all have season best times of 9:49 in that event.

Expect Brayden Bender to run away with the 110-meter hurdles at this sectional. Bender's season best time of 14.45 ranks in the top five statewide.

The Terre Haute North sectional will get started at 5:30 Eastern Time.

Boys Sectional 26 is at Bloomington North, and the hosts are heavy favorites to win the sectional championship. Mason Childers leads the way for the Cougars, his 800-meter run time of 1:55.76 is the sixth best time in the state.

The best race of the evening may be the 4x400-meter relay. Bloomington North and Bloomington South have both run under 3:30 this season, and both rank in the state's top ten 4x400 teams.

Sectional action from Bloomington North will begin at 5:30 Eastern Time.

Sectional 27 will feature an extremely close team race between Seymour and Jennings County. Seymour is the more balanced team, while Jennings County will rely primarily on the distance events Thursday night.

The most compelling event in this sectional may be the high jump. Carter Ezzel has the best mark coming into this meet with a 6-2, but there are four athletes with season bests of 6-0 and three more at 5-10 in an event that is wide open.

Boys Sectional 27 from Jennings County will begin at 5:30 Eastern Time.

Sectional 28 should see a three way fight for the sectional championship between Charlestown, Austin and Jeffersonville. Jeffersonville has won 46 boys track sectionals in school history, while Charlestown and Austin have yet to win one.

Some of the most entertaining and most important events of Thursday evening will be the sprints. Charlestown's Steven Cruz and Jake Ottersbach will compete with Jordan Ferguson and Jeremiah Brown of Jeffersonville in those events, and you can expect them to take the top four places in what should be a very close 100-meter dash. Jeffersonville's Drew Nelson should have close races with Ottersbach in the hurdles, and the 4x100-meter relay teams for Jeffersonville and Charlestown have season best times of 44.91 and 45.08, respectively.

Austin's biggest strength in this meet is their distance runners. Expect to see Wyatt Beck and Chance Craig right at the front of the 1600-meter run, and the two of them should run away with the 3200-meter run.

Sectional 28 from Jeffersonville will begin at 6:00 Eastern Time.

Corydon Central's Camden Marshall headlines Sectional 29. Marshall won semi-state in cross country last fall, and he has backed it up with a great track season in his Senior campaign. Marshall's best 1600-meter run time of 4:19.1 ranks second in Indiana this spring, but the Indiana University commit is far from a lock to win the distance events at this meet. Weston Naville and Will Conway from Floyd Central, along with New Albany's Aidan and Aaron Lord will provide competition in what should be some great distance races.

The race for the team title will be a close one. New Albany and Floyd Central are the favorites, and you can expect to see athletes from those two schools at the top of nearly every event Thursday night.

Sectional 29 from Floyd Central will begin at 6:00 Eastern Time

Sectional 30 is at Jasper, and the hosts have won this meet each of the last four years. This year, they are led by distance runner Abe Eckman. Eckman ran a 9:14.9 at the Carmel Distance Showcase in April, which puts him in the top ten in Indiana in that event.

The Jasper sectional will begin at 6:30 Eastern Time.

South Knox is the heavy favorite to win Sectional 31 at Princeton Community, what would be their first sectional championship since 2007. The Spartans bring a great group of jumpers to this meet, including one of the state's leading pole vaulters in Will Staggs. Staggs ranks fourth in Indiana with a season best of 14-8 in the pole vault, and should be able to dominate this meet.

Staggs will also be a contender in the 100-meter dash, which should be one of the best races of the evening. Staggs, Barr-Reeve's Kaden Buse, and North Daviess' Zo Jeffers all have season best times between 12.06 and 12.09.

Sectional 32 is hosted by Evansville Central, and Castle High School looks poised to take a sectional championship thanks to a great lineup in the field events and an elite hurdler in Cade Bardwell.