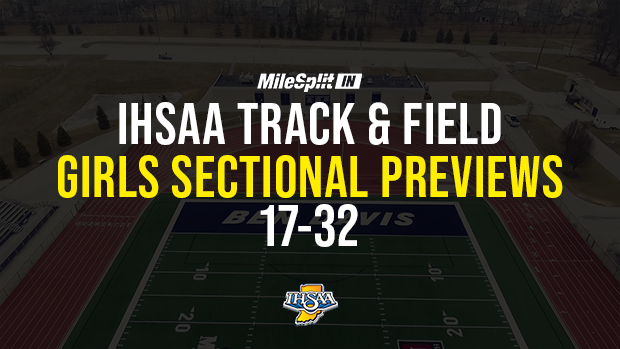 MileSplit is breaking down all 32 sectionals to get you up to speed with the competition!

Down below are previews for Girls Sectionals seventeen through thirty-two!

Nicki Southerland headlines Sectional #17 at Delta. The Delta Freshman had an outstanding cross country season in the fall, and her best time of 4:57.5 in the 1600-meter run ranks third in the state this season. Southerland will dominate the distance events in this sectional, and could win the 1600 by more than thirty seconds.

The team competition here will be a good one. Yorktown, Delta and Jay County all bring teams capable of winning. Delta will rely on the distance events while Yorktown and Jay County are counting on points from their sprinters.

Sectional 17 will get started at 5:00 Eastern Time.

Lawrence North has won the last five sectionals they competed in, and the Wildcats look poised to do it again on Tuesday at Sectional #18.

Nearly all of Lawrence North's points will come in the running events. The Wildcats will be counting on Joi Henson and Tionna Thompson to dominate the sprints, while Carol Ludington and Brielle Vail do the same in distance.

Shenandoah thrower Erikka Hill will be one to watch in this sectional. Her season best shot put mark of 47-11 is the best in the state - by nearly five feet.

Another field event to keep an eye on will be the long jump. New Castle's Anyssa Hall and Lawrence North's Henson have both jumped over 17 feet this year and should have a great duel.

Sectional 18 at Pendleton Heights will begin at 5:30 Eastern Time.

Sectional 19 at Lawrence Central will see the two best sprinters in the state compete for sectional championships. Lawrence Central's Taylor Herbert and North Central's Ramiah Elliott have season best times of 11.74 and 11.78 in the 100-meter dash, more than two tenths faster than anyone else in Indiana. Herbert and Elliott last met at the Metropolitan Interscholastic Conference Championships, with Herbert winning on that occasion.

Those attending Sectional 19 will not only get to see the fastest sprinters in Indiana, but some of the fastest hurdlers as well. Cathedral's Reese Sanders is truly in a class of her own when it comes to the 300-meter hurdles. Her best time this season is a 42.94, which is nearly three seconds faster than the next best time in the state. Mary Bea Sowinski out of Chatard is a top five hurdler in her own right, and would easily win most sectionals but will have the tall task of going up against Sanders this Tuesday.

Another event to watch will be the 1600-meter run. Chatard's Lily Cridge and Park Tudor's Sophia Kennedy own the top two times in the state in that event with a 4:54.9 for Cridge and a 4:57.3 for Kennedy.

North Central is the most complete team in this meet and is the favorite to take their 27th sectional championship.

The Lawrence Central Sectional will begin at 5:30 Eastern Time.

Sectional 20 from Ben Davis should see some great sprinting action. Southport's Amani Prince, Pike's Sydney Randolph and Ben Davis' Nyla Jones and Kacyra Simmons should put on a good show in those events. Jones' 12.28 is the best 100-meter dash time in the bunch coming into the postseason, while Prince owns the best 200-meter dash time at 25.35 and Simmons leads the way in the 400-meter dash with a 59.72.

Pike is the slim favorite to win this meet in what could be a two team race with Ben Davis, while Cardinal Ritter, Perry Meridian and Southport lurk close behind.

Warren Central brings a great squad of sprinters to Sectional 21. Senior Tacoria Humphrey's best time of 25.01 in the 200-meter dash is third best in the state, and you can expect to see Jila Vaden and Sequoia Gilbert leading the way in the sprints at this sectional as well for Warren Central. The Warriors have won this meet 19 of the last 20 years, and they look poised to do so again this year.

Sectional 21 from Shelbyville will begin at 5:30 Eastern Time.

The distance events will be the highlight of the night at Sectional 22 hosted by Franklin Community High School. The 3200-meter run will feature two runners that have eclipsed 11:00 this season, as Columbus North Senior Mackenzie Barnett will clash Franklin Community's Lauren Klem.

Columbus North also brings a great 4x800-meter relay team to this meet. The Bulldogs ran a 9:18 at the Pike Invitational earlier this season, the fastest time of anyone in Indiana by more than thirty seconds and the tenth best time in the country this year.

The Center Grove Trojans have won this meet each of the last five years, and they are the favorites to win it this year as well.

The Franklin Community Sectional will begin at 5:30 Eastern Time.

Sectional 23 at Connersville will be one of the closer sectionals in the state this week. Connersville, Hagerstown and Richmond all bring evenly matched teams to this meet, and Rushville and Centerville could make some noise as well.

The best race of the day could be the 400-meter dash. Connersville's Katelyn Seeley and Northeastern's Willow Runyon both have season best times right at 1:05 in that event.

Sectional 24 is hosted by East Central, and the Trojans have won 19 consecutive sectionals. East Central will be the team to beat again this year, led by their star sprinter Ellie Langerich. Langerich's season best 400-meter dash time of 57.53 is the fifth best time in the state and should be enough to dominate this sectional.

East Central's Jessica Stenger and Greensburg's Emarie Jackson are two of the state's best throwers. Stenger's best marks are just a bit better than Jackson's, with 39-0.75 in the shot put and 133-0.5 in discus.

The closest race of the evening may be the 100-meter hurdles. Oldenburg Academy's Kate Walke's best time of 15.72 in that event is just a tick faster than South Ripley's Emily Flood, whose season best time is 15.73.

The East Central Sectional will get under way at 5:00 Eastern Time.

Terre Haute South's Courtney Jones headlines Sectional 25. Jones is expected to dominate the sprints and hurdles in this meet, and her best 300-meter hurdles time of 45.79 is second best in the state this season.

Terre Haute South is a slight favorite to win their sixth straight sectional, with Terre Haute North and Northview not far behind. Watch for Northview Freshmen Ella Hayes and Gnister Grant to lead the way in the distance events, while Terre Haute North's Tyresha Clark will battle with South Putnam's Bree Mahoney-Sutherland for the top spot in the throwing events.

Sectional 25 from Terre Haute North will begin at 5:30 Eastern Time.

Bloomington South's Amiyah Davis headlines Sectional 26. Davis is the state's leading 400-meter runner with a time of 55.84, and should cruise through the sprinting events in this meet.

Expect Analyssa Crain and Clara Crain to lead the distance events. The sisters from Edgewood finished 1-2 at the cross country sectional and are expected to dominate this meet.

Bloomington North is the most complete at this meet, and should comfortably take the sectional title.

Sectional 26 from Bloomington North will get started at 5:30 Eastern Time.

Girls Sectional 27 is hosted by Seymour, and the Wildcats are heavy favorites tak the sectional championship. Seymour boasts a great distance lineup with Brooke Trinkle, Samantha Jacobi and Vivienne Siefker, while Wildat Lara Skaggs will be the athlete to beat in the hurdles and pole vault.

Orleans' Lily Saliba and Seymour's Hayley Harpe should have a great race in the 400-meter dash. Saliba and Harpe both have season best times of 1:03.6.

The Seymour sectional will get under way at 5:45 Eastern Time

Girls Sectional 28 will come down to Jeffersonville and Charlestown. Should Jeffersonville win this sectional, they would tie Terre Haute North for the most girls track sectional titles with 32. Charlestown, on the other hand, is looking for their first sectional championship in school history.

Charlestown will have a shot at this sectional largely due to their sprinters, particularly Freshman Lyric Steele. Steele comes into this meet with the best time in the 100-meter dash and the 200-meter dash, though her 100 time of 12.69 is only one hundredth of a second better than Rock Creek's Ligia Williams. Look for Steele and Williams to put on a show in both the 100 and the 200.

Sectional 28 at Madison will get started at 6:00 Eastern Time.

Sectional 29 at Corydon Central should feature great racing throughout the night and a captivating team competition as well. Expect New Albany to dominate the sprinting events at this meet and Floyd Central to do the same in distance, and those two teams should end with very close point totals at the end of the night.

New Albany's Elise Gordon will be one to watch on Tuesday night. Gordon comes into this meet with the best times of anyone in the 100-meter dash, 200-meter dash, and 100-meter hurdles, and she is a very good long jumper as well.

Girls Sectional 29 will get started at 5:30 Eastern Time.

Rachel Mehringer from Forest Park headlines Sectional 30 hosted by Perry Central. Mehringer is one of the state's leading sprinters and hurdlers, with her season best 100-meter hurdles time of 14.39 ranking second in Indiana. Claire Lange will provide competition for Mehringer in the 300-meter hurdles, as her best time of 47.28 in that event is just a few ticks slower than Mehringer's 47.02.

Led by Mehringer and a great group of distance runners, Forest Park has a chance to win their first sectional since 2009. To do so they will have to knock off a Jasper team that has won the last eight sectionals.

Expect to see Princeton at the front of most of the running events, while Barr-Reeve will fare better in the field events. Princeton will rely heavily on sisters Heidi and Haley Meade, who should be able to finish 1-2 in long distance events.

The throwing events will be critical to the outcome of this meet, as Barr-Reeve's Anna Ballengee will have to compete with Courtney Dove and Maddon Williams from Princeton. Ballengee and Dove are the top two in shot put coming into this meet with nearly identical season bests, while Ballengee and Williams are the top two in discus, again with nearly identical season bests.

Girls Sectional 31 will get started at 5:00 Central Time.

Evansville Memorial has won their last two sectionals, and they are the favorites to do it again this year at Sectional 32. Memorial will be at the top of nearly all the running events, with Jacqueline Brasseale in distance and Hope McGuire in the sprints.

The relays should be some of the most exciting events Tuesday night. Evansville Memorial and Evansville North have season best times separated by just a few tenths in both the 4x100-meter relay and 4x400-meter relay.

Sectional 32 from Mt. Vernon will get started at 5:30 Central Time.