James did not lead the majority of the girls race, but was comfortably hanging in the lead pack the whole way. As other runners fell off, James stayed right on the heels of the leaders. By the last straight, it was down to just James and Fort Wayne Carroll's Zoe Duffus. James pulled a small gap on Duffus with a few hundred yards to go, but Duffus came back strong and was weaving around, trying to find a way past. The Carroll Senior didn't quite have the strength to get past James, and came across the line two seconds adrift of the state champion. James finished fourth in the state meet last year, and will get one more opportunity to compete for a state championship. Duffus, the New Haven Semi-State champion, will be running for Penn State next year.

Carmel won their 19th girls team title with a score of 52 points, one of the lowest scores ever in the state finals. Carroll finished twenty points back in second, with Columbus North, Zionsville and North Central rounding out the top five.

Carmel's Annie Christie was able to run with the leaders for much of the race, and finished about fifteen seconds back in third. Christie helped lead Carmel to the team championship, won the Shelbyville Semi-State last week, and became a Regional champion in what was a stellar season for the Greyhound Senior. 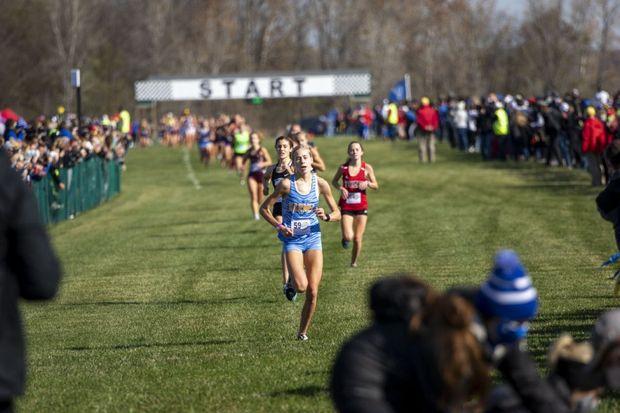 North Central's Ellen Baker was perhaps the best runner in Indiana not to win a race in her Senior campaign. Baker recorded runner-up finishes in the Marion County Championships, sectionals and regionals. Though it wasn't a PR, Baker had the race of her life on Saturday with a fourth place finish, nearly running down Christie for third on a day that was not conducive to fast times.

Delta's Nicki Southerland was the highest finishing Freshman in the race, coming home ninth. Southerland was one of the fastest runners in Indiana all year, including posting the state's fastest time at the Riverview Health Invitational. Southerland led early in this race, but faded after the first mile and never truly challenged for the win.

In the boys race, it was Steury and Kole Mathison running shoulder to shoulder for most of the event. By the first turn, Steury and Mathison had broken away from the pack and it stayed that way until Highland's Lucas Guerra joined the lead group late in the race. Steury was able to leave Mathison and Guerra behind in the last mile, and won the race by ten seconds. Steury went undefeated in the 2020 season, and ran the fastest time in the state at the Marion Invitational.

Guerra was able to nab second from Mathison in the closing moments of the race, and take second place for the second consecutive year. Guerra dominated the Northwest part of the state throughout his career, and will become a Georgetown Hoya next fall.

Mathison came into this race undefeated, but wasn't quite strong enough to hold on at the end of the day in this one. Of the three leaders, Mathison is the only one that will be returning next year as the Sophomore will have two more chances to secure a state title.

Columbus North was led by Junior Reese Kilbarger-Stumpff, who finished with a strong fourth place result. Kilbarger-Stumpff was a Regional Champion and Semi-State Runner-up this year after finishing 26th in the state meet last year, and he'll be back one more time to try to secure a state title.

Just behind Kilbarger-Stumpff in fifth was another Junior, Mariano Retzloff out of Penn. Retzloff had a breakout year in 2020, winning half a dozen races after narrowly missing the state finals in 2019. Retzloff had a great month of October, winning a sectional and a regional and finishing second to Steury in the New Haven Semi-State before recording a top five in the state finals.

The four semi-states were all represented at the top of the boys race, with Steury, Guerra, Mathison and Kilbarger-Stumpff all coming out of different semi-states last week.

With the cross country season now behind us, we look forward to an exciting track season this spring and what will no doubt be another great fall of cross country in 2021!