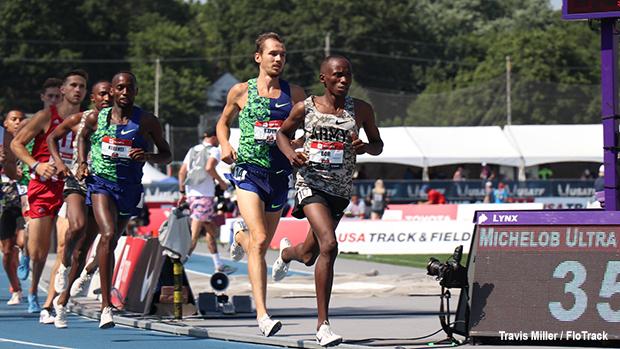 Third time's a charm? Well for Indiana University grad, Andy Bayer, it was actually 5th time's a charm when it comes to making Team USA for the 2019 World Championships. In the past four world qualifying champs, Bayer has come up just one place short, in 4th from making the team. Saturday that streak ended, as he raced to a 3rd place finish in 8:23.23 in the steeplechase finals.

"It's a relief. I feel a sense of accomplishment." Bayer said.

His goals now? To stay healthy for Worlds in September and hopefully run 8:10 or faster in Paris just before Doha.

He believes he would've never taken up the steeplechase if he hadn't gone out to Oregon, where he trained with Olympic medalist Evan Jager at Bowerman TC. Before, he was primarily a 1500 guy. Now back in Bloomington and training with Ron Helmer again, he isn't ruling out going back to the 1500 at all.

"I want to run this year and next year in the steeple. And then if I'm alive and well in 2021 I might just do all 1500's that year and see what happens." Bayer said of his future.

Andy Bayer is a 2008 grad of Leo High School where he was the 3200 state champion in 2008 and took 6th at the cross country state meet earlier that year. He attended Indiana University, where he was the 2012 NCAA Champ in the 1500.

Also making the team after the finals in the 400m Hurdles is Ashley Spencer, of Lawrence North High School. She took 3rd in the finals behind a world record finish of 52.20 of Dalilah Muhammad and Sydney McLaughlin.