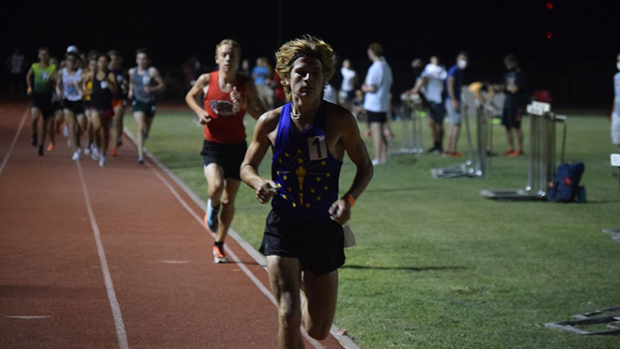 In a year that looked like no official track meets would happen, the west coast is giving track and field athletes and fans just what they've been craving, actual racing. This weekend, two Indiana freshman made the 1700 mile journey out to Arizona to get some racing in at the Desert Dream - Last Hurrah Invitational.

Center Grove's Ty Garrett and Drew Costelow went out to race in some of the distance events in an attempt to salvage what was lost of their freshman track season.

The boys raced once together on Friday night, in the 1600. Then they each ran once more on Saturday, Costelow in the 800 and Garrett in the 3200.

In the 1600, the guys quickly established themselves just half way in that this was going to be their race to control. Garrett took over a commanding lead, gapping the field by about 10-15 meters, Costelow wasn't far behind to make a move to put himself into 2nd. Lap 3, Garrett seemed to step on the gas just a little more gapping Costelow by about 5 seconds with the rest of the field seemingly out of sight. In the final lap, the guys both put out strong kicks in the final 250 meters, coming across the line in 4:22 and 4:24 respectively with Garrett in front. The next closest competitor finished 5 seconds behind Costelow.

Costelow was first up on Saturday night, in the 800. Lap one he got stuck behind the lead pack with little room to get himself into a strong position going into the final lap, coming through 400 in 8th place. It took to about the 500 mark before he could get around enough to start a strong kick for the finish. Costelow finished in 5th place in 2:01.37, setting a new outdoor PR in the process.

Garrett capped off the weekend competition in the fast section of the 3200. The freshman ran this race a little more conservative than he ran the 1600 the night before, hanging out in the top pack in 4th place for the first half of the race, letting the others do the work. In the 7th lap, Garrett dropped down to 4th after leading the lap before. In the bell lap, he had some room to make up if he wanted to take this race as his. With just over 200 to go, Garrett started to kick, making it around the rest of the field to blaze down the home stretch, crossing in 9:08.87.

Ty Garrett's time, not only put him No.10 in the country right now, but he also broke the Indiana freshman 3200 record in the process. The previous time of 9:11.97 was set back at the 2009 state meet by Futsum Zienasellassie. To put his time in another perspective as well, all-time among freshman he is now ranked No. 5 with the No. 1 time coming from Eli Krahn from MN back in 2013 with a time of 8:58.67.

Both Garrett and Costelow are closing out their freshman years, and likely will start training for cross country here in the coming weeks. Last fall, Ty Garrett took 22nd in the state cross country meet. Costelow did not race the state meet but did take 15th at the Shelbyville Semi-State.