Throughout every season, Indiana athletes time and time again have remarkable performances. Elite performances like running a 10.50 100m or sub 9 minute 2 mile garner attention statewide from athletes, coaches, and fans of the sport. These high level performances spark debates upon who is the best athlete. Often times in many sports there is a debate on who is the best athlete in that sport. In a sport like baseball, there is usually a clear cut best player. In running this debate is tougher because of all the different types of athletes competing in different distances. 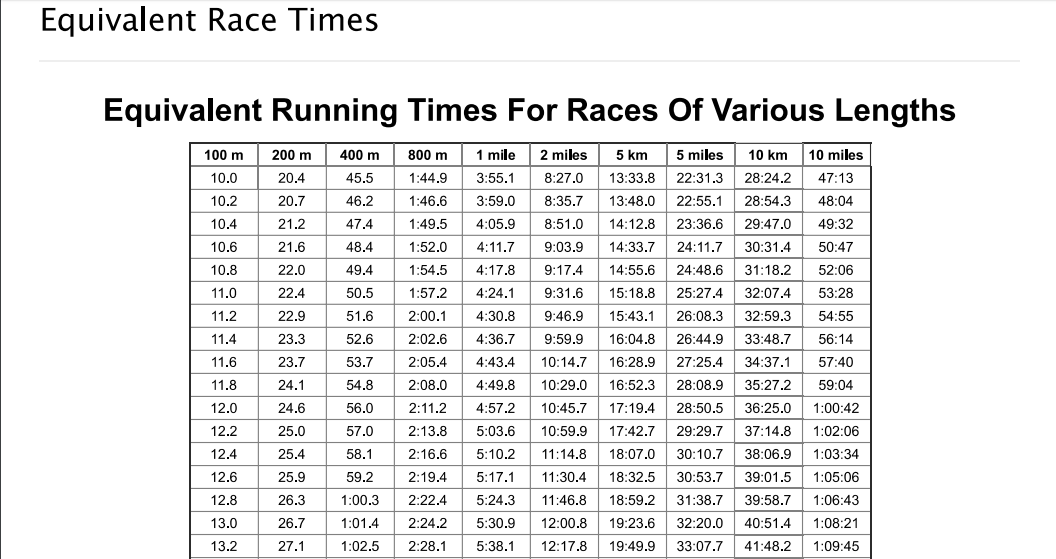 We will be answering this debate right here by using this chart of equivalences. This chart compares the times from running events on a track such as the 100m dash and what a similar level of performance would be for an athlete competing in 2 mile. These are all hypothetical as it is unlikely that a 10 second 100 meter sprinter would be able to run a sub-4 mile, but simply based on that current pace what they could accomplish.

The top 5 performances on the boys side came from the state meet this year at IU. This provided a great time for the spectators as many of the athletes brought their best on that hot, humid day in early June.

#5 Tahj Johnson, Oak Hill High School- Johnson's 48.42 for 400m was good enough to grab second place at the State Finals this year. Johnson was only a sophomore this last season and is expected to drop even more time in the coming years. He will be special.

#4 Craig Young, Fort Wayne Wayne- Young competed in the 100m dash at the State Finals and clocked in a time of 10.58 that was good enough for 3rd. Young just completed his junior year and is the top returner in the 100 and could very well qualify for state in the 200 next year also.

#3 Justin Becker, Fort Wayne Carroll- Becker finished second at the State Finals for 100m after being barely edged out at the line by Isaac Guerendo. Becker had his revenge later that evening when he took home the victory in the 200m over Guerendo, clocking in a very impressive time of 21.50. Becker will continuing his career at Purdue University.

#2 Isaac Guerendo, Avon- Guerendo competes in a multitude of events each and every meet, and was the driving force that helped see it through that Avon won its first state title. His most noteworthy running performance comes in the 100m at the State Finals where he won in a very impressive 10.51. Guerendo will be attending Wisconsin next year on a football scholarship.

#1 Braden Corzan, Chesterton- Corzan won the State Championship in the 400m in a blazing fast time of 47.41. His time is good enough for #15 all time in Indiana and is the third fastest time in the last 10 years. For you distance fans out there, that is a similar performance level to an 8:51 for 2 miles! Corzan will be continuing his very impressive career at Indiana State next year.

Unlike the boys, the top 5 performances on the girl's side incorporate some distance runners and not all the top performances again come from the State meet. This could be partially due to the delay for storms in the middle of the state meet.

#4 Emma Wilson, Greencastle- Like Bates, Wilson doubled the 1600m and 3200m all season including the State Meet. At the State Meet she ran away from the field and cruised to a dominating victory in the 3200m with a time of 10:27.83, which converts to a 10:31.47 for 2 miles. Wilson just completed her junior year and has already won the 3200m title twice.

#3 Tionna Brown, Kokomo- Another stud sophomore, Brown won the 200m at the State Meet in 23.86. Brown also has runner up finish in the 100m at the State meet from this year. Brown is one of the leaders in a great group of young female sprinters that are sure to put on a show in future years.

#1 Semira Killebrew, Brebeuf Jesuit- Killebrew claimed her first outdoor State Championship this year in the 100m with the #5 time all time with 11.55. Killebrew will look to climb farther up the all-time rankings during her senior season next year. The speedy Brave is .16 off of the all-time record.